The fascination of sub-cultures 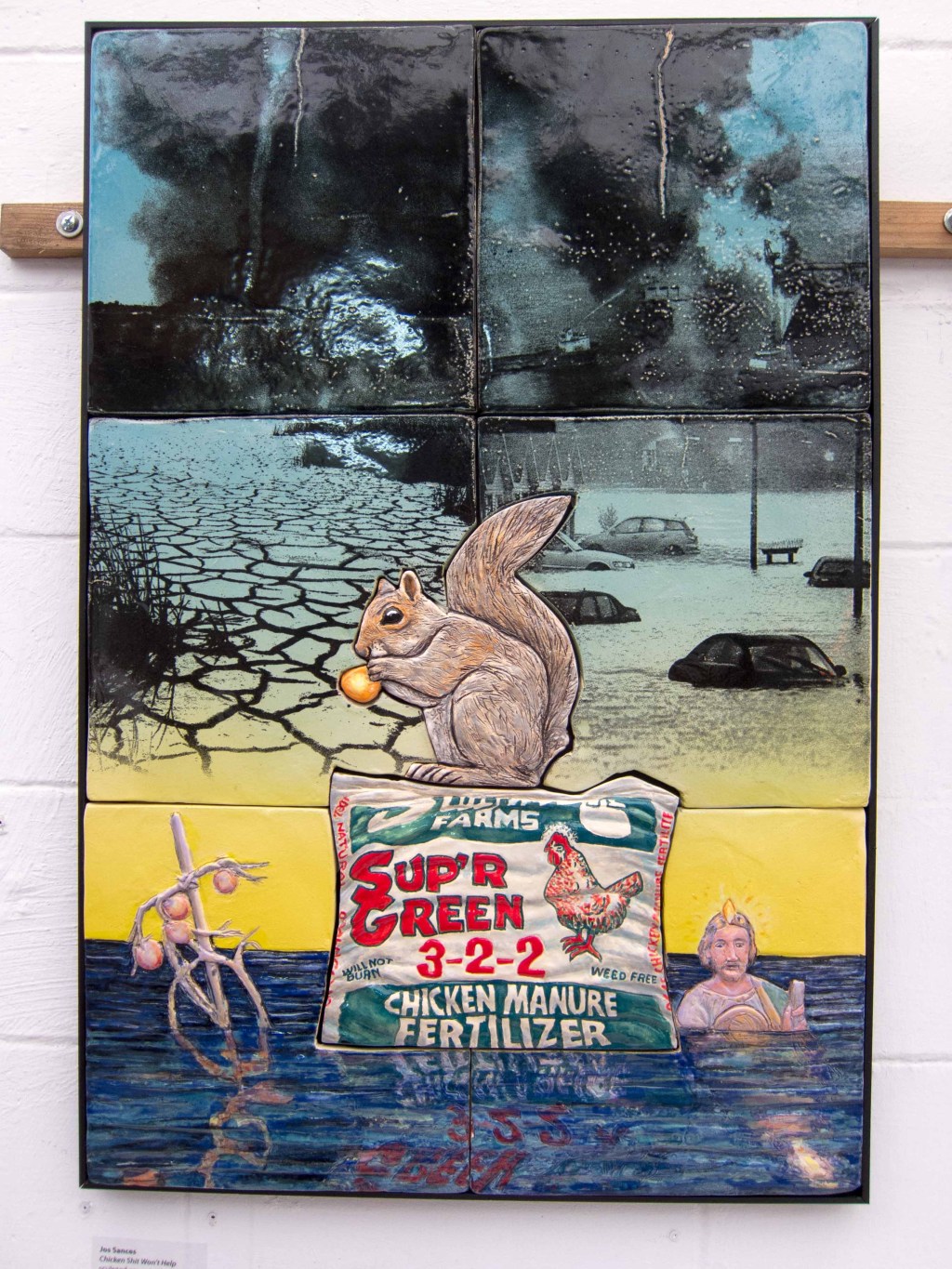 Artwork that is just hanging around the store

The groups people choose to be part of become smaller and smaller subsets of the general populace.  Generally, I think the smaller the group the more interesting, as people get more and more monomaniacal about their interests.

Saturday, we went to a book signing at Leslie Ceramic Supply, which is the place to go in the Bay Area if you need something to feed your pottery or ceramic habit.  Ostensibly, we were going to see our friend Joe Bologna, but the truth is we can’t pass up a party.

Leslie Ceramics is on San Pablo, just north of Gilman.  From the street it’s just a storefront, but then the building extends quite a ways to the rear, into more space and even another small building that seems to have become an art gallery known only to some obscure in-crowd. 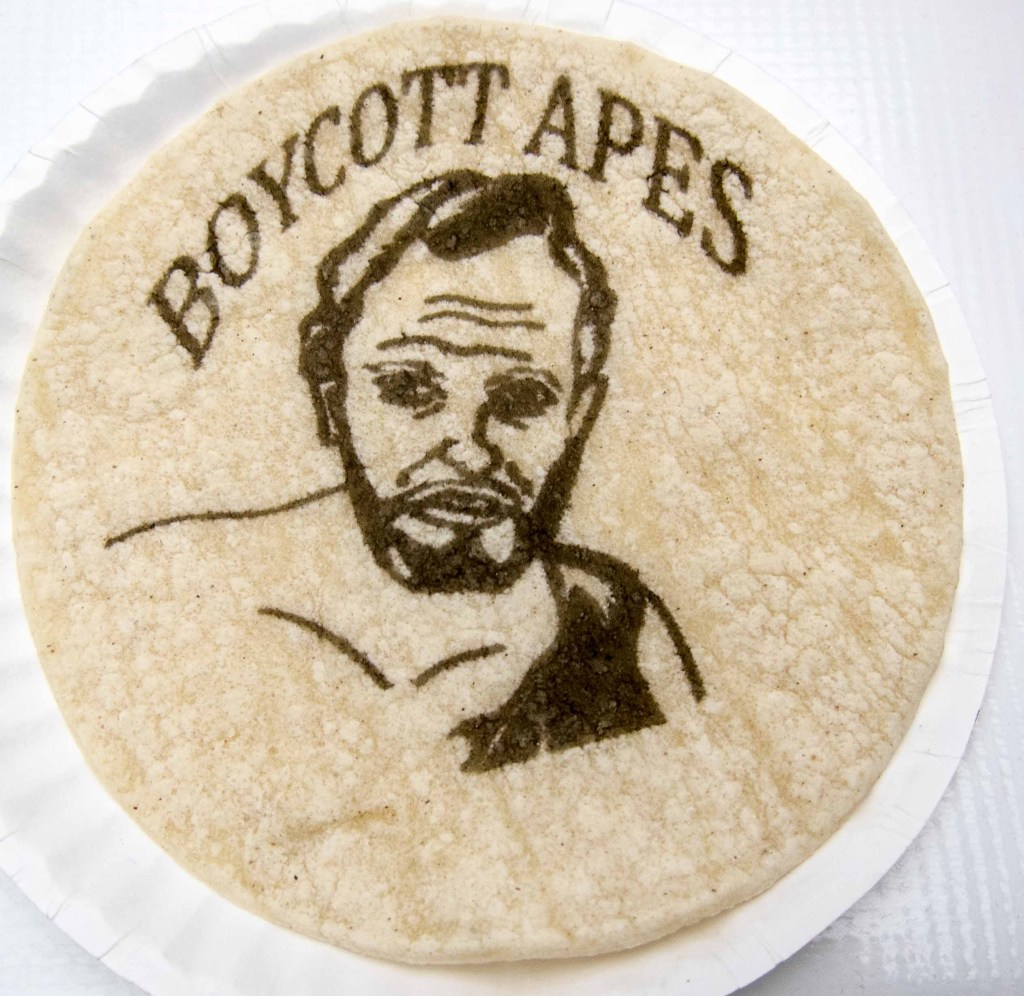 That's a tortilla, screen printed with Hershey's chocolate syrup. No, I don't know what it means.

John Toki, in person rather than in chocolate sauce.

The caterer, and his screen printing press. Everything is done fresh and on-site.

The Great Tortilla Conspiracy, as the catering group calls itself, turns tortillas into art, and then into quesadillas with cheese and chicken.  Creativity comes in many forms.

Back to the store.  If you don’t work in clay, there is nothing here for you.  If you do work in clay, this place is Disneyland.  Everything from tiny pieces of copper cut into weird shapes to insert into your work, all the way up to industrial sized kilns.  Clays of  every type, and glazes in every possible color.  Hundreds of obscure tools for working the mud into the shape of your dreams.  I don’t need any of it, but it’s still fascinating to look at.

Then there are the artists.  It was like old home week, because all these people seem to know each other from a lifetime of classes, expositions, group studios, group shows, group therapy (okay, I made that one up), and just hanging out at the store.

At least one of the  people there was genuinely famous. 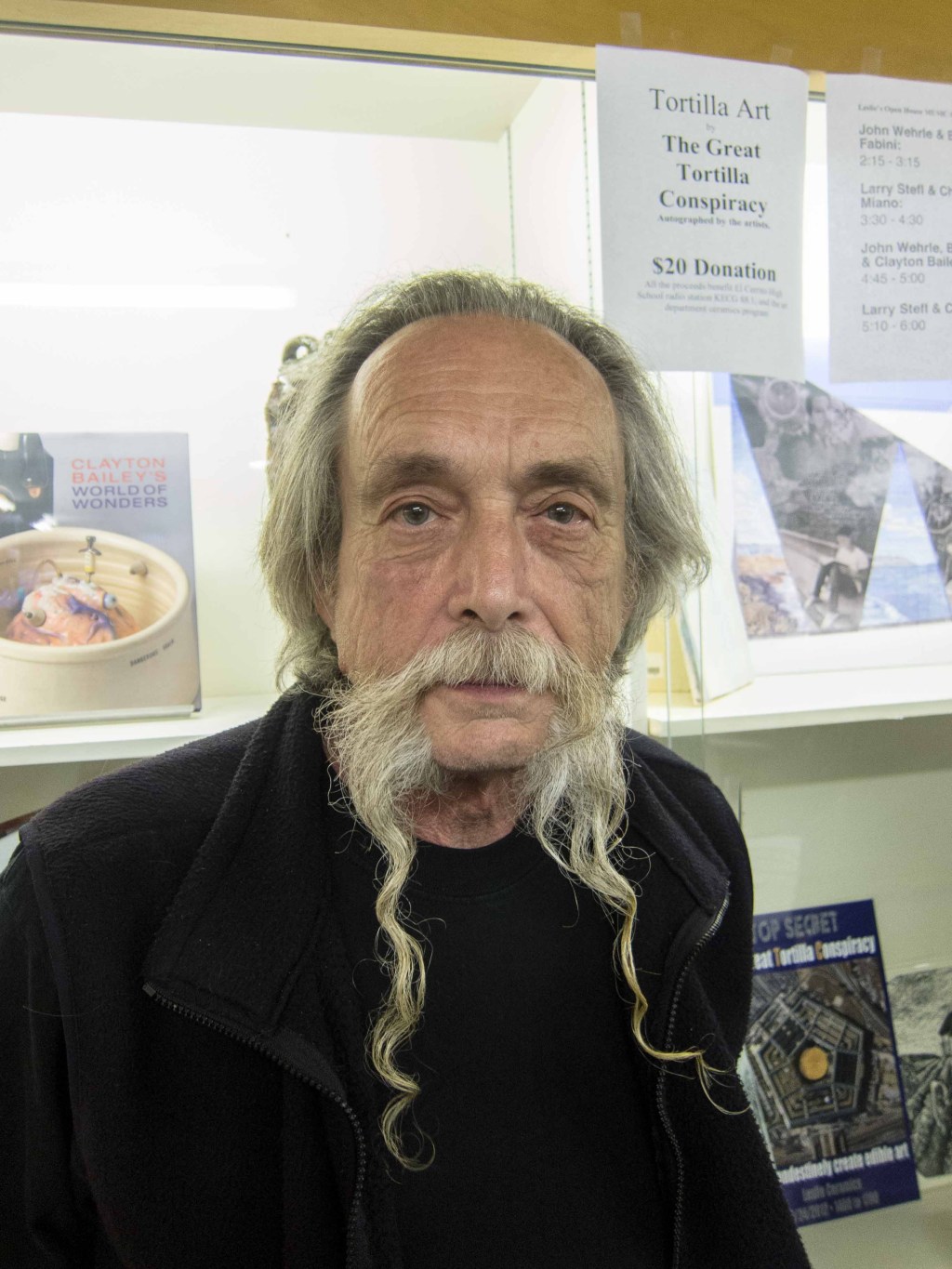 Clayton was the star of an exhibit at the Crocker Art Museum in Sacramento earlier this year.  Here’s how they described it:

A ceramist, sculptor, and self-proclaimed “mad scientist,” Bailey aims to surprise and delight with his art. This exhibition presents the full range of his inspired eccentricity in clay and metal, including his early ceramic critters, signature “exploding pots,” life-sized robot sculptures, and ray guns fashioned from discarded aluminum.

Anyone who wears a mustache like that is just a little off kilter, but when he told Gail that he saves every one of the whiskers that fall out, she knew she was in deep waters.

Not that Clayton had the only eccentric facial hair there.

Eccentricity runs rampant among artists, and their mustaches.

Ceramicists fall into two broad categories–those who work on bowls, plates, cups and platters, whose work has a practical utility, and those who create art for its own sake.  The work we saw Saturday was all in the pure art category, and I really enjoyed it.

This tableau was inside the store, in a glass case.

For some reason, ceramic art is very often very political. 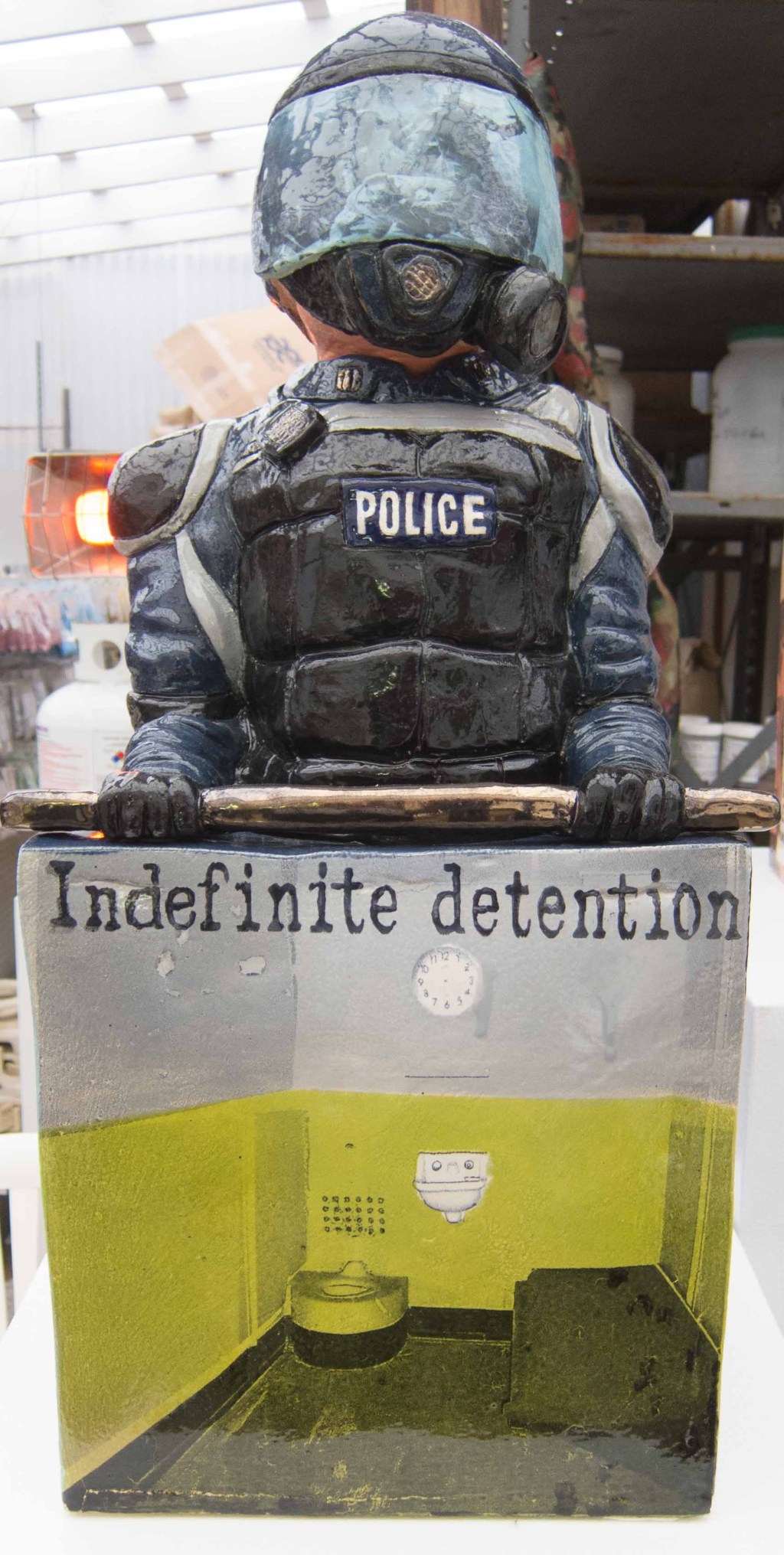 Political, but not subtle.

You don't often think of ceramics as two-dimensional works to be hung on your walls, but they can be.

And that’s the story of what I did on Saturday.  The art was good, the people were at least as interesting.  Since I’m not a potter, I’d never have a purpose for going to Leslie Ceramics, and I’m glad this opportunity popped up.  We had a chance to talk to Clayton, and Gail got him to agree that we could auction off a tour of his home/studio for the Ruth Bancroft Garden gala next September.  The day was a success all around.

2 thoughts on “The fascination of sub-cultures”