Jonathan Pryce (left) as Davies and Alan Cox as Aston in Harold Pinter's 1960 breakthrough play, "The Caretaker," at the Curran Theatre in San Francisco.
Photo: Carlos Avila Gonzalez / The Chronicle

Okay, so I think I’m a pretty smart guy.  Sunday, though, I went to the theater with Gail and Winnie and Jerry, to see The Caretaker at the Curran theater, and I didn’t have the faintest idea of what what was going on.

The good news, for me at least, is that Gail didn’t get it either.  Nor did Winnie, nor did Jerry.  We can’t all be blockheads, can we?

This is a famous play, which has gotten decent, not great but decent, reviews here in the local papers.  It stars the renowned Jonathan Pryce, he of the fame from Miss Saigon  and innumerable Infiniti commercials.

Pryce plays Davies, a homeless man taken in by Ashton, played by Alan Cox.  Ashton lives in a run down house which his brother, Mick (played by Alex Hassel) owns and sometimes shares.

Things happen.  There is lots of talk, and lots of yelling.  I don’t like yelling.

Some of it is funny.  There is a slapstick scene with a bag which I thought was right out of the Marx Brothers–but the scholarly articles I read trying to figure this play out say it references Waiting for Godot.

And that’s a clue–I wasn’t aware that Pinter wrote absurdist plays in the mode of Samuel Beckett or Eugene Ionesco, but that seems to be what is happening here, absurdism rearing its ugly and confusing head.

The play is written in three acts, describing a time period of two or three weeks.  It is performed in two acts, with no indication of the passing of time in the program.  Curiously, the program has no notes whatsoever on the play.  You’re on your own here, and the people I overheard in the lobby during intermission and after the play were as confused as I was.

I’m not recommending this play.  The acting is very, very good–not just Pryce, but all three members of the cast are excellent.  The set is attractive, and they have designed a soundscape that brings the entire theater into the action.   The play, though,  is more than passing incomprehensible.  I read a number of articles online trying to figure it out, and they seem to contradict each other–nobody appears to really know except the author, and he isn’t talking, not that I can find at least.

What I will recommend is a little Italian restaurant in Montclair, on Thornhill Road, called Viva Voce.  We went there after the show because we had a coupon Winnie won at the bridge club, and were very happily surprised with the quality of the food and the delightful decor. 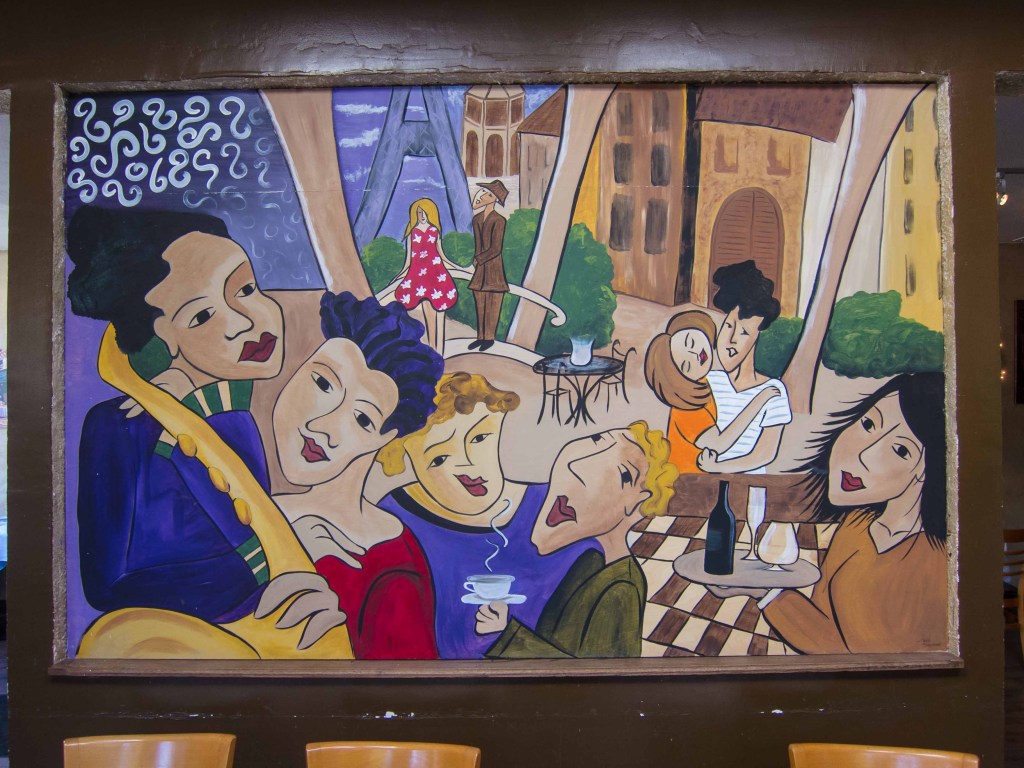 The wall with its large windows, and the mural reflected. Winnie is waiting for the rest of us to get set and order some dinner.

Although it seems to be quite an old building, the addition of large circular windows and multiple skylights makes this a wonderfully open and airy establishment.

The food is excellent–starting with the house-baked bread brought to the table still steaming.  Gail had a seafood paella, Winnie enjoyed a tequila chicken pizza that was unlike anything we’d ever seen (and we’ve seen some pizza), Jerry had the veal parmigiana and I stuck with the basic Linguine Aglio y Olio, linguini with olive oil and garlic.  Jerry and I finished our plates, the girls took half their portions home (but I know for a fact that Gail finished hers today).

Excellent food, good service, reasonable prices.   A little odd in that they tacked on the gratuity for a party of four, but I won’t hold that against them.  Viva Voce, in Montclair.  Give them a try, I think you’ll like the place.

2 thoughts on “Color me confused”