Third time, not the charm

There’s a restaurant in Oakland named Pican, where we’ve eaten twice before and liked tremendously.  It’s a very hip centerpiece to the whole Oakland Renaissance, catering to the most integrated crowd I’ve seen in the Bay Area.  They are famous for Southern food and even offer flights of premium bourbons for the discerning drinker.

We went there Sunday night with BJ and Jack Hawks, and boy, were we disappointed.

We were there early, before the concert we were headed for.  I wasn’t thrilled when we walked in and they wanted to know my first and last name, not (they claimed) for their marketing but so “the manager can come over and say hello”.  Thanks, but I want dinner not a new best friend.

The menu is exciting, with down-home southern cooking tarted up with lots of seafood and fancy spices.  I knew before we got there that I was going to have the She Crab Soup, for which they are justly famous.  I did and it was everything I remembered.

Gail and BJ had Caesar Salads, and were not impressed.  They both think that the dressing is made inhouse, I have the cynical opinion that it was just “Monarch #6 Salad dressing (Ceasar)”.  In either case, nobody was excited over the salad.

BJ  then ordered the Southern Fried Chicken, which comes with a side of macaroni and cheese:

Sadly, it didn’t live up to its reputation.  Just plain old chicken, nothing special.  Even the mac ‘n cheese, which is Gail’s favorite, just wasn’t special.

A bed of roasted corn, a square of meat loaf and a topping of tomato jam. Looks turned out to be deceiving.

In this case, the meat loaf was a disaster.  Gail had one, small bite and left the rest.  She ate the all of the corn and said it was great, but the meatloaf just didn’t make it.  The bus boy had an odd look when he picked up the plate with the mostly untouched entree on it–if he was well trained, he showed it to the chef (who needs to know when things aren’t working). 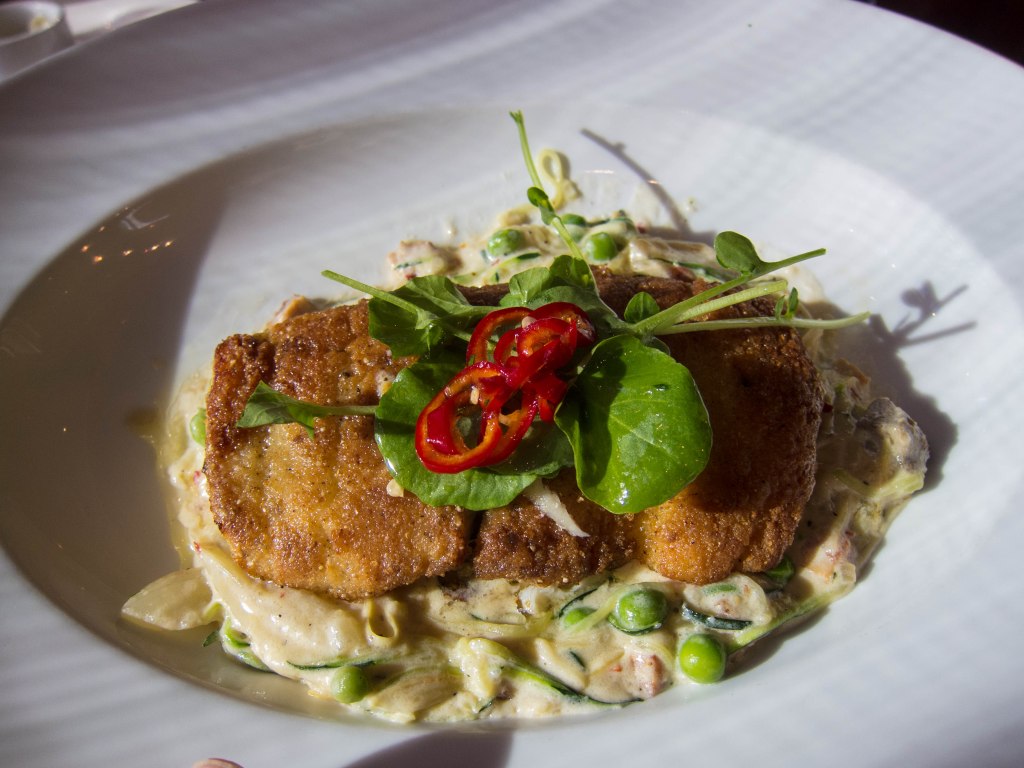 I didn’t taste the Snapper, but Jack ate it all and didn’t have anything snarky to say.

I had the risotto Jambalaya.  It isn’t often that I say a dish isn’t spicy enough, since I’m a sissy about spicy foods, but this was pretty bland.  At first, I wasn’t going to have a photo, because the presentation wasn’t particularly interesting–it’s just a bowl of rice and seafood, after all.  But then, as I got to the bottom of the plate, I found an orange pool of oil.

That’s one enormous puddle of grease at the bottom of my dish.

That just doesn’t cut it.  It’s sloppy kitchen work at best, and not something you should see in a place that aspires to fine dining.

It saddens me to see that this restaurant has let their standards slip so much–the other times we ate there we raved, this time we ranted.  Then we paid the check and headed off to the Tim McGraw/Kenny Chesney Brothers of the Sun concert.  Maybe we should just have had some garlic fries and a hot dog at the stadium.

One thought on “Third time, not the charm”