Out with BJ and Larry tonight, continuing our hunt for the finest Mexican restaurant in the Bay Area.  While we didn’t, I should think, find the very best, we did have an excellent mean in very pleasant surroundings.

Tonight, the search took us to Doña Tomás, a large facility right on Telegraph Ave in Oakland’s Temescal district.  I tried to make a reservation on Opentable, but they had no tables listed, so I called.  A table was offered, slightly later than we wanted but I took it, and just got there 15 minutes early.

There are a couple of indoor dining rooms, a large patio in the rear and then another, mostly open, room in the far back.  We chose to enjoy the perfect weather on the patio, but soon wanted the heaters lit.  After the 3rd time we asked, we got heat.

Intrepid foodies sacrificing their cholesterol levels for the sake of adventure.

A glorious bougainvillea graces the patio.

The first thing you start with is always drinks, and what is a Mexican restaurant with a margarita?  As one would expect, Doña Tomás offers a variety of the Mexican classic.  BJ wants me to tell you that the Margarita de la Reyna  (hand-shaken El Tesoro Silver tequila, Cointreau & fresh lime, served up) is one of the great margaritas of all time.  The first was so good she had to have a second to make sure it wasn’t a fluke: it wasn’t.

I ordered the iced tea, as usual, only to find that they offer “hibiscus ice tea”, which is a dreadful concoction that I instantly rejected, instead opting for hot tea and two glasses of ice.  What is the attraction of hibiscus?  Why not just give the customer what he ordered–iced tea?

On to the food:  we liked it.  We started with the guacamole, which was excellent, fresh and accompanied by fresh, house made chips, not something out of a bag and a factory.  BJ had mentioned the taquitos, which were made with halibut cheeks, so we had to try them and enjoyed the subtle, hearty flavor which was not at all overtly fishy.

Larry and I had soup.  He had the sopa de lima, described as:

I had the Gazpacho

We both felt that the soup was neither the best nor the worst we had had, it was just a basic, decent soup.

Gail had the Chiles Rellenos

Every restaurant has its own version of Chiles Rellenos, so they can be hard to compare.  All I can say for sure is that Gail liked these, and would order them again.

This is what Larry had.  It looks good, and he didn’t leave any.

This was my dinner:

To me, “seared” albacore is just that–thrown on an exceedingly hot grill for a few seconds on each side, so the fish is searer on the outside and rare/raw in the center.  This fish was cooked, through and through.  It was OK, I guess, but it was hardly what I expected from the menu.

I didn’t get a photo, but BJ had the shrimp tacos and pronounced them excellent. 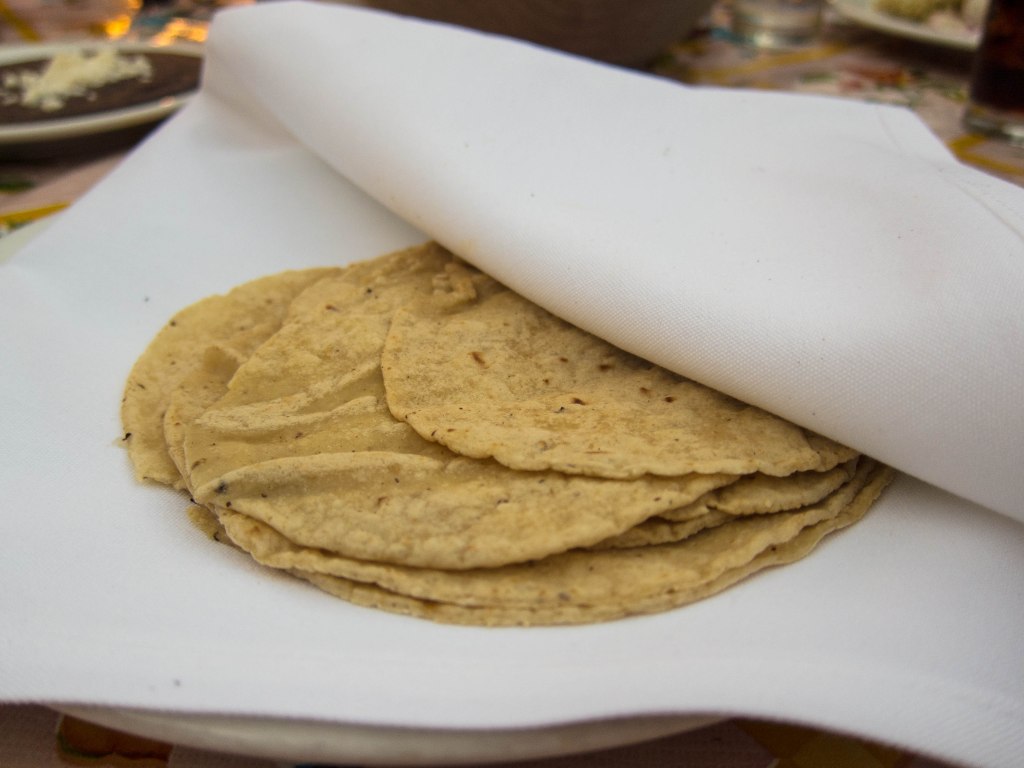 It’s the little things that count–one of the pleasures of eating at Doña Tomás  is the handmade, absolutely fresh tortillas.  No sissy flour here, you get your choice of corn or corn.

The people next to us were having what looked like a great dessert, so we ordered it too. Although Gail isn’t much of  a sweets eater, she made an exception for this:

The sun was setting over our dinner, and this frozen Mexican hot chocolate.

Here’s the recap:  dinner was decent.  I’ve had better, I’ve had much worse.  The service is sorta good, but not wonderful.  The fish was overcooked, the soup was ordinary, the dessert was spectacular.  Great ice cream outweighs being slow to light the heater, so we’re willing to go back.  You probably should give it a try.  Avoid the fish, order dessert.  Don’t forget the Margarita de la Reyna.