To Tennessee for good Mexican

As far as I’m concerned, the best restaurant in Gatlinburg is No Way Jose’s.  It’s also the closest one to our house, which makes it a double winner.  Tonight was our night to go there.

That’s after a busy day, of course  The first thing that happened is I got ready to go play cards this morning and found that I had no car keys.  The other guys leave for the 9 am start, and I come in after the first 12 boards.  But they had managed to take one of the cars and all of the car keys.  Several phone calls later I managed to get Mike on the phone.  He told Jack who told Bob who jumped in the car they had and delivered the keys–fortunately we are only about 4 or 5 minutes from the playing site.

All of which was to no avail since we lost the match.

Then I walked out and down the  street and had lunch at Johnny Rockets, which had no customers and about 7 employees.  I got the best service in history, and a pretty good Philly cheese steak.  G’burg in general doesn’t seem very busy to me this year, and there certainly wasn’t any business at Johnny Rocket’s.

Back for the afternoon session, and Mike and I started out.  The match was fairly swingy, and we were tied with one board left to score–but sadly the opponents made a game against us at our table, and made a game our way at the other table, so we had a huge loss and ended up down 16 for the first half.

I was out the second half.  Went to the grocery to restock the house and then back to relax.  Mike called and said they lost 11 to 56 in the second half.  He was wrong–it was 11 to 61.  That meant we qualified for the loser swiss tonight.

So out to dinner.   I always read the whole menu at a Mexican place, then order the fajitas.  Same thing here. 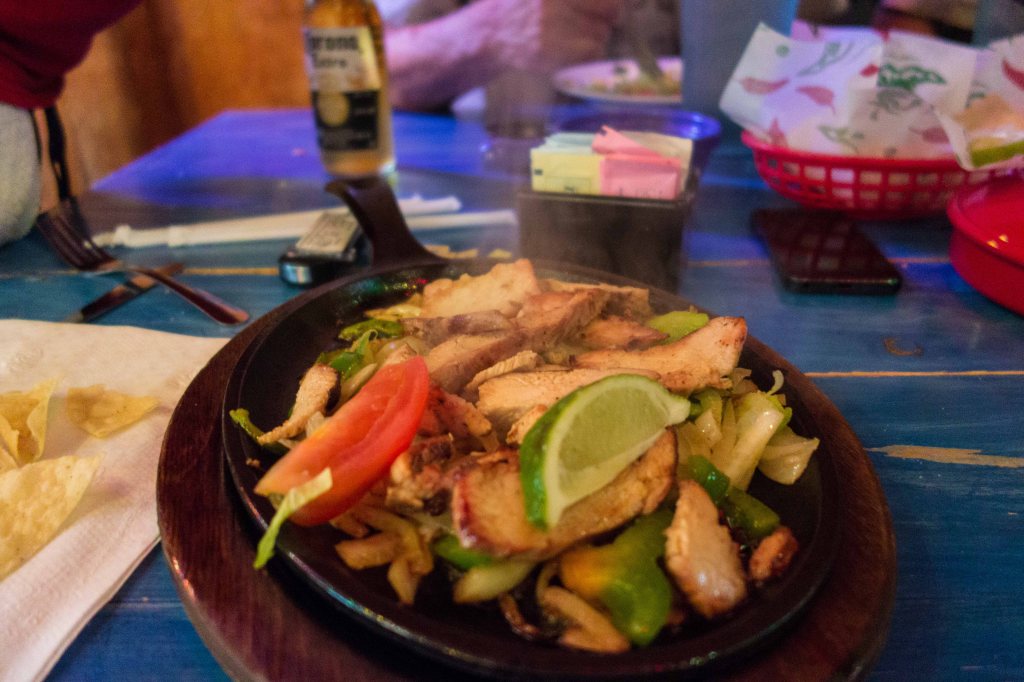 I tried to show the steam rising from the sizzling platter.

There is nothing really special about this plate, it’s just a good plate of chicken fajitas.  It came with two more plates, of rice, beans, guacamole, sour cream, salsa, cheese and lettuce.  Nobody goes hungry in G’burg.

Micky had the enchilada plate:

Three enchiladas. On a plate the size of a manhole cover.

We are six large men, and there was more than enough food for all of us.

My bill for dinner came to $20, but that includes the tip.  This place is cheap.

Leaving No Way Jose’s, I saw some of the local wildlife, so tame that they just ignore the traffic.  That’s Mike walking on the left hand side:

Cousins to Frank and Elizabeth back at home.

Since we lost this morning we will start another compact KO tomorrow at 9.  Mike and I will be playing with friends from home, Gary McGregor and his partner, and the other 4 guys will make one team.

In other home town news, I saw that Mike Rippey and his partner, George, picked up two other guys also named George and Mike and played in the KO’s, coming in 2nd in their bracket.  And Jack Meng and Judy Keilin found partners here and placed in their bracket.  So our unit is doing well here in the hinterlands.

Time to hit the sack–9 am gets here way too soon for my taste.