Port Costa is a tiny community of 190 souls at the dead end of a narrow road off highway 4. There isn’t much there–a biker bar, a couple of boutiques, and a restaurant, the Bull Valley Roadhouse.

The Bull Valley has existed in different incarnations a number of times, perhaps the latest can survive longer than most. Good food is never enough to keep a place in business, you have to have a way to get the customers there. Will people go somewhere obscure and hard to find just for a good meal? Just how quirky can you be and still make a living?

Try this quirky–the Bull Valley Roadhouse is only open Thursday through Sunday. That probably makes sense–who’s going to go exploring far enough off the beaten path to keep this place busy on Monday or Tuesday nights?

Things didn’t start well. The wine list is so chi-chi, with a complex collection of wines you’ve never heard of, that Gail couldn’t make heads or tails of it. I ordered ice tea, as always. They brought me something red. I asked what it was. They said it was tangerine lemon tea. I didn’t want fruit juice, I wanted tea. The waitress got mad at me for expressing my desire to have what I had ordered–tea. Thought it was “inappropriate” of me to explain to her that I only wanted tea. I wasn’t pleased.

I did eventually get pot of hot tea, and some ice. I asked for sweetener. Asking for “the yellow stuff”, the waitress didn’t know what that meant. This was not some teenager in her first day on her first job. I explained. They brought it. 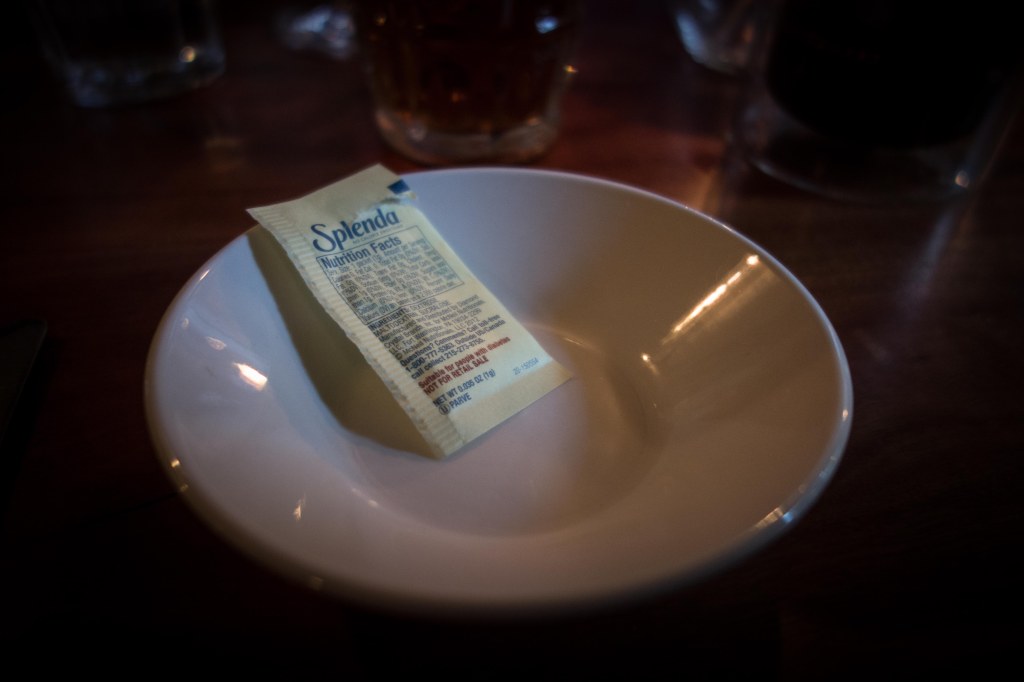 That’s right. One packet. Uno. Eine. Ichi (Japanese for 1) They claimed it was the only one in the entire place. I was not amused.

Gail and Carol shared the caesar salad, which they make with little gem lettuce instead of the traditional romaine. That’s a good thing for Gail, since she doesn’t care for the large spines in the romaine. 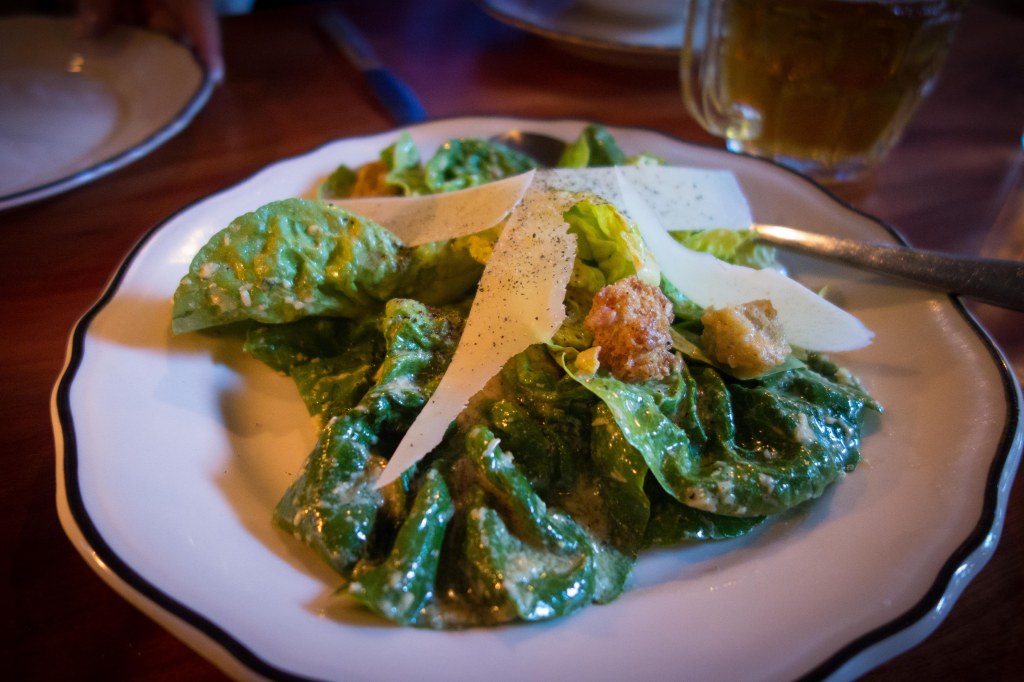 The salad was a clear winner. The advertised anchovies were apparently mixed into the dressing enough to be indistinguishable, which made Carol happy.

Jack and I had the potato leek soup, which was awfully spicy but very good. We were surprised at how small the cup of soup was for the price.

Which brings up the issue of portions. The Bull Valley Roadhouse bills itself as “family style”, but it certainly isn’t like any family style eatery I’ve ever seen. They seem to just mean that their portions are marginally larger than normal and people might be inclined to share a bit. This is definitely not like eating in a Basque restaurant where each dish is meant to be passed and shared.

I had the Lamb Sugo, which is just a pasta dish with a lamb sauce. Not some pebbly, gritty bits of ground lamb, but decent chunks of meat, a good ratio of pasta and an interesting dollop of creme fraiche. Not pretty enough to photograph, but clearly good enough to eat. Also quite spicy. I’ve eaten pasta all my life, I don’t understand why anyone would put hot peppers in it.

Gail had the pork stew and polenta. 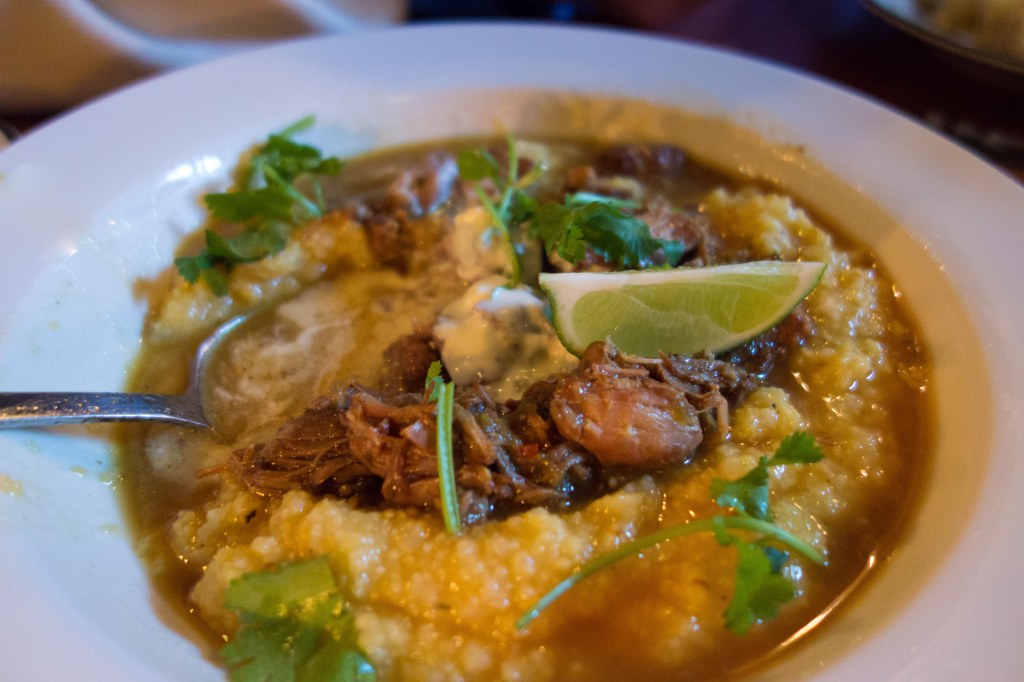 The polenta was perfect, she felt the pork was overcooked. I didn’t mind the pork, and was quite impressed with the bright flavors from fresh herbs and cilantro.

Jack and Carol clearly made the best choice tonight:

The fried chicken, accompanied by mashed potatoes and bacon-honey gravy, was the star of the evening. It may have been the best fried chicken I’ve ever tasted. Each order contains 4 pieces of chicken–this dish, at least, is easy to share.

The bar specializes in cocktails from the 1930’s and 40’s. I think it would be interesting, if you like that sort of thing.

The building is intriguing, with chandeliers converted from gas burning lamps of the 1800’s, a wall of old daguerreotypes and other Victoriana. There is a lovely patio in the back, but I don’t think they serve food out there. Yet. The Bull Valley is relatively new, and is still a work in progress.

I have no idea whether or not they will be able to attract enough customers over the long run to make a go of it. Right now, they are basking in great reviews and quite busy. Go to opentable.com and make a reservation if you don”t want to wait for your table.

If you haven’t been to Port Costa, go early, have a drink in the Warehouse (the building at the end of the road on the right), then cross the street for dinner at the Bull Valley. Order the fried chicken. Bring your own sweetener.

2 thoughts on “No bull dining”