We hadn’t seen Gail’s son Toby since early January, so it was time to head up to Seattle for lunch with the young master.  We made quite a troop at Oakland airport, Gail and I, daughter Kate and granddaughters Demi and Chloe.  If we can’t have a party at home, we’ll take the party with us.

It was a spectacular day–85 degrees in Seattle while it was threatening rain here in the Bay Area.  The whole damned world is topsy turvy these days. 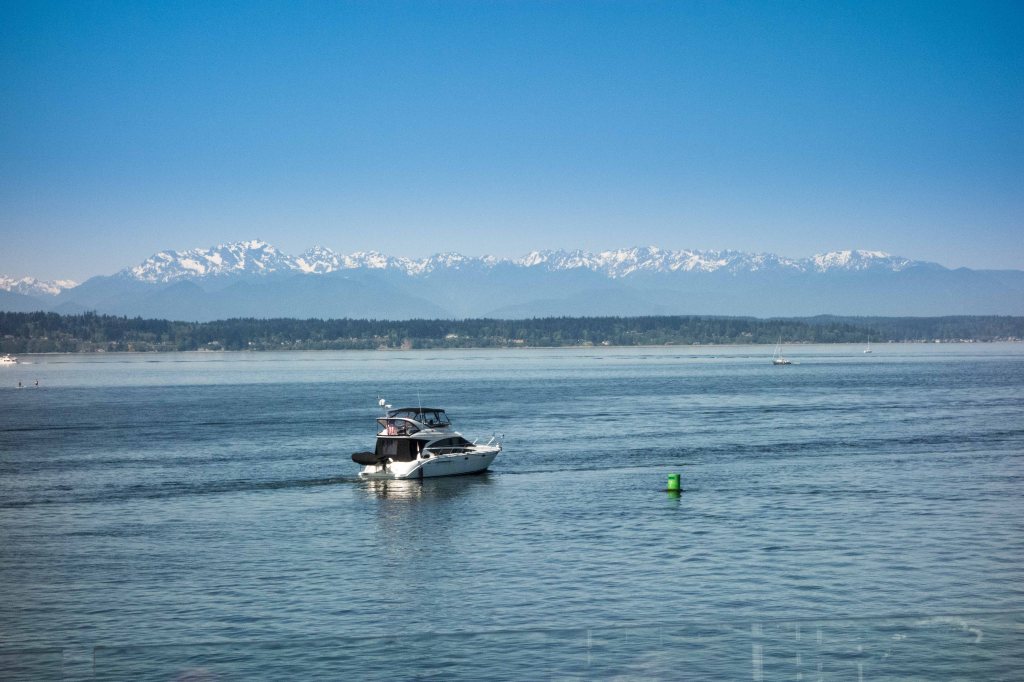 The view off the deck of Ray’s Boathouse

We had lunch at a great place call Ray’s Boathouse.  They served us a great lunch with a great view of Bainbridge Island.

Looking for new experiences, we headed down to the waterfront and went for a ride on the new ferris wheel.  This isn’t some cheesy carnival ride, it’s a huge, permanent attraction.  It costs $13 for three spins, and it’s worth it.  Air conditioned cabs that hold 8 people each rise maybe 150 feet over the dock and give you a view you won’t forget.

Looking south towards the football and baseball stadiums.

All tourists are required to pay a visit to Pike Place Market–it’s in the state constitution.

This photo is required before you can leave the state.

One must also make a pilgrimage to Starbucks #1. 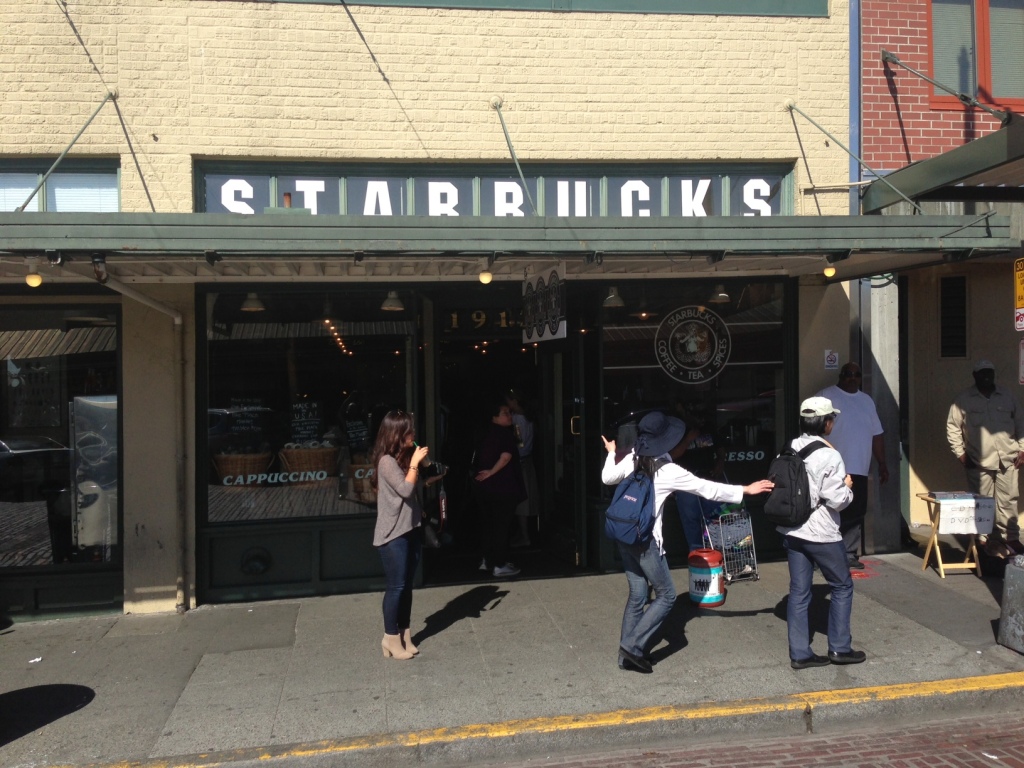 The rock upon which the empire was built.

Then it was  time to get back to the airport and fly home.  It seems silly to some people to go all the way to Seattle just for lunch, but how much time do the kids really want to spend with the folks?  We had a wonderful afternoon and we’re back home to sleep in our own bed.  That works for me.

One more thing to end this story.  The geniuses who run SEA-TAC have “improved” the place, if by improved you mean made it much less useful.

The car rental agencies used to be right across the road from the terminal.  10 minutes after you left the plane you could be driving away.  That was far too efficient, though, so they spent untold millions of dollars to build a beautiful, brand new rental car terminal.

All you have to do is walk 10 or 12 minutes to the very far end of the airport, then get on a bus for a two mile ride.  In a mere 20 or 25 minutes, you can be in line to get your car.  I guess that the tradeoff is a couple of hundred parking spaces opened up in the airport garage, but the convenience factor of the airport is diminished hugely.

The bright light in this fiasco is the attitude of everyone involved.  All the people I met at Alamo rental today were cheerful and helpful, and continually asking if there was any way they could do something more for me.

Then there was the driver of the shuttle bus on my return, Dwayne.

The kind of employee a boss dreams about

This guy is great!  He is warm and friendly and helpful, and without a motive, because he is forbidden to accept tips.  He gave us a running commentary and guided tour on the way back to the terminal, pointing out the Cascades and the Coastals and Mount Rainier.  He helps with the luggage and knows which airlines are at which terminal.  If there were more great people like him SEA-TAC would be more fun and less of a miserable hassle.  He makes the silly relocated terminal a pleasure.

Southwest Air brought us home only a few minutes late.  Now I have to hit the sack; another adventure starts at 8 am Tuesday morning.  Stay tuned.