Home again.  11 days was the perfect length, we loved the trip and are glad to be home.

Leaving Amalfi, we climbed seemingly straight up to get over the mountain.  The trip to Naples is only about 30 miles, but it takes about an hour and half.  It’s a seriously beautiful hour and a half; driving the tiny, curvy roads is a challenge sometimes well justified by the views and the tiny towns you pass through–many of which, except for the satellite dishes, could easily be backdrops for a WWII movie.

Getting into Naples, we lost data connection on the iPhones and spent 45 minutes driving in circles trying to find the Marriott Renaissance hotel.  We only drove down a pedestrian street once.  Google Maps has been a disappointment this trip; the next time we go I’ll have a better system in place.  There are standalone apps for the iPad which don’t need a data connection to work, and that’s the way to go, I think.

The hotel recommended a local restaurant for dinner.  The food was decent and the facility was intriguing:

A panoramic photo of the entirety of this tiny restaurant.

The place was miniscule; we certainly needed our reservation.  There were a couple of outsides tables in the front,  people were sitting there waiting for a table to open up.  The food was excellent, the service was pretty good  considering how crammed in everyone was.  It was only a 2 block walk from the hotel, just right to settle our dinner before bedtime.

Leaving Naples the next day for the airport hotel, the granddaughters wanted to stop at an outlet mall.  Yep, just like in Pleasanton or Gilroy, Vacaville or Santa Rosa, the outlet mall has entered the Italian landscape.  First, we had to get out of Naples, which was much easier than getting in.  I thought one of the buildings we passed was worth photographing;

The way the people live.

This was more of a working class apartment house, along a major artery with the worst paving I’ve ever seen in a first world country.

Thirty minutes later, we arrived. This mall was like a combination of Las Vegas and Disneyland.  Many of the very same stores you would see at home, with the same merchandise.  A few special differences made it interesting.

Everything clean and open. Not much traffic on a Monday. 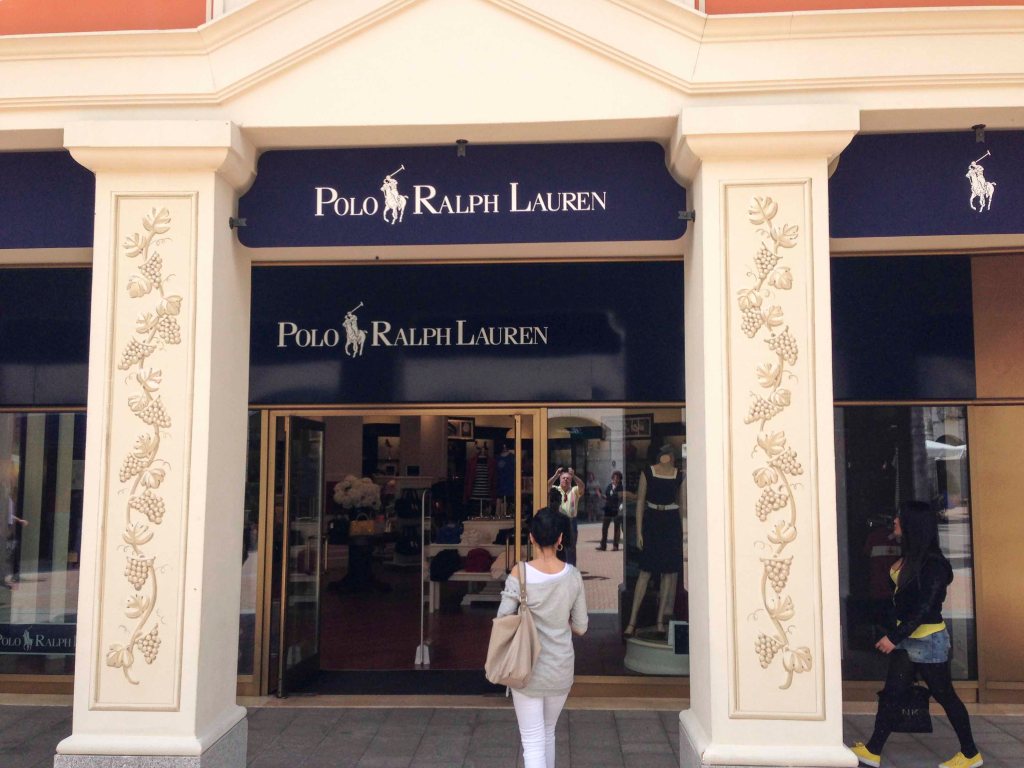 What would an outlet mall be without Polo?

If the world seems to be getting smaller, it may just be because of the spread of outlet malls.  Walking down the clean, open arcades, you would be hard pressed to know whether you were in Kentucky or Campagnia.  There just isn’t much here that says “Italy”.

A rack of cigarettes behind the counter at a diner.

There is more smoking in Italy than in California, to be sure.  The restaurants have ash trays on the tables, there are more people smoking on the street, and you can buy smokes without being made to feel like a criminal.

In truth, there isn’t much here for us.  Most of these stores are American brands selling clothes made in Bangladesh, and subject to a 21% VAT and a ghastly exchange rate with the dollar.  The prices are quite a bit higher than they are right here–who needs to come 6000 miles to spend more?

Surprisingly, the best deal we found was on a pair of ladies pants in the exceedingly upscale Prada store.  We passed on the €125 baby shoes, but Demi only paid €30 for some very cool trousers.

The pants are in the bag–the lace shorts came from Positano.

Here’s a store you won’t see around here: 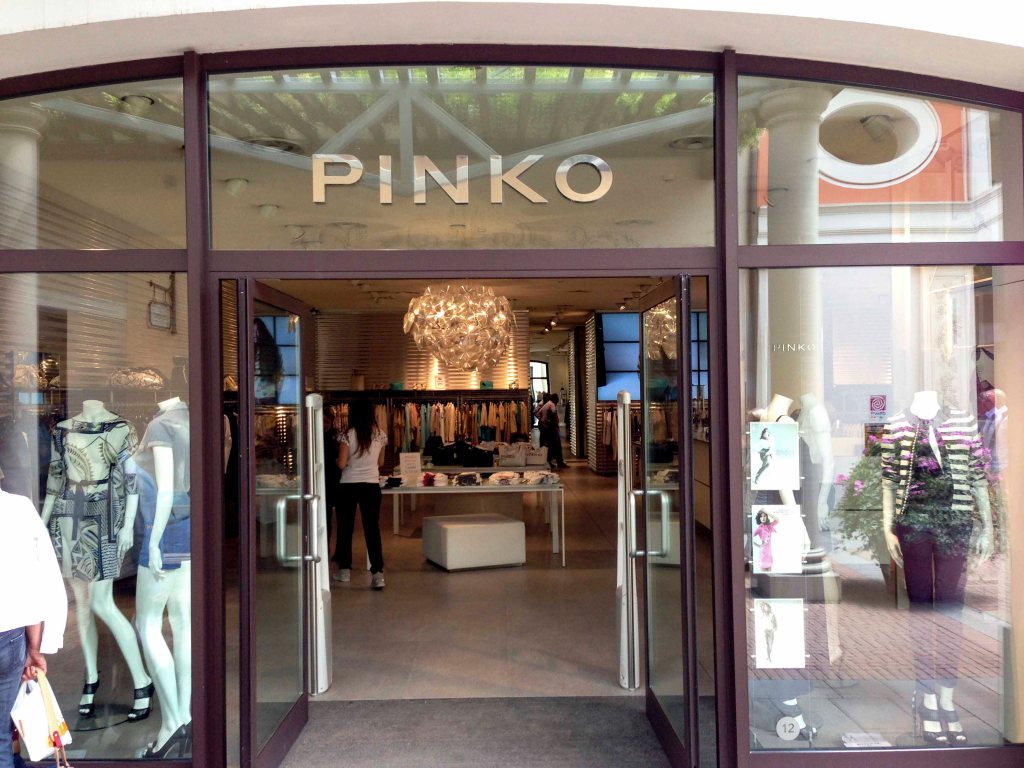 Another store I don’t need to travel to Italy to visit.

The art there is good.

Shopping completed, we drove the last 2 hours to the airport Hilton, ready for our flight home at 11:15 the next morning.  Hah.

At 4 am my phone rang–it was American Airlines telling me our flight had been delayed until 1:30.  At 4:01, the phone rang again because Brad and Kate had a different reservation locator, with my phone number on both.

At 5 am, the same drill, pushing the flight back another hour.

At noon, we headed to the airport for our now 3:30 flight.  The security theater was particularly idiotic, they were asking the same silly questions we used to endure 13 years ago: Did you pack your own bags?  Did anyone give you a package?  Have your bags been out of your control?  Ridiculous.  Then the security line was long and slow.  Then they asked us the same stupid questions AGAIN before we could get on the plane, which finally departed at 4 pm. 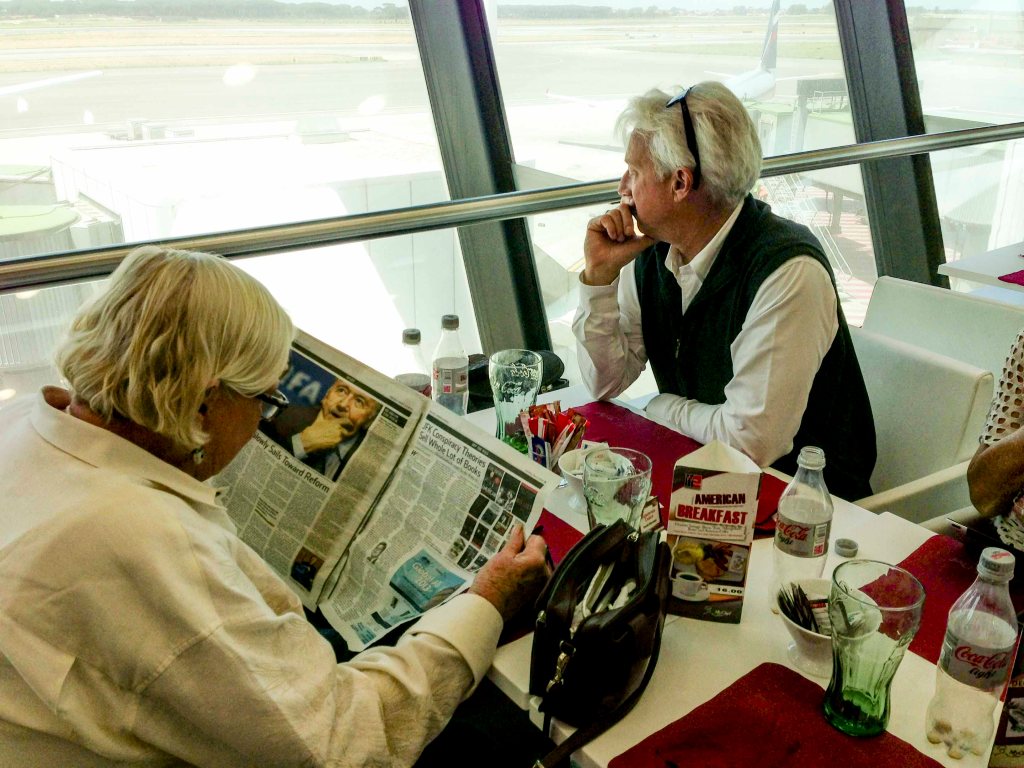 Killing time in the airport.

Landing in Chicago at 7, we did not expect to make our 8:10 flight home.  Indeed, American had already booked us on the 7:20 flight the next morning and issued hotel and meal vouchers.  But God was on our side, or something.  There was no line at immigration.  Our bags came off the conveyor faster than I have ever seen, and we sailed through customs.  The American re-booking desk was incredibly efficient, and put us on the evening flight.  We raced to the train for the next terminal, skated through security again with no line, and were in our seats on the new flight 41 minutes after we landed. That’s some kind of miracle that will never happen again.

One more thing:  Gail left her iPhone on the counter at rebooking, a fact she noticed just as we were going into the security check in the next terminal.  She was mildly distraught until she heard someone calling her–it was the agent from the rebooking desk, who had found the phone and raced after us to return it.  I take back at least 23% of the bad things I’ve ever said about airline personnel, this guy was great.

Our trip was a huge success.  I think the lasting impression will be the beauty of the cities terraced into the stone cliffs of the Amalfi coast, and the freshness and texture of the phenomenal tomatoes we enjoyed with every meal.  The weather wasn’t what you might want, but I can see sun anytime here in California, the lightning and thunder over the Mediterranean were a treat.

Stay tuned for the next adventure.

One thought on “Italy wrapup”