I feel like my life, as good as it is, has been in a slowdown lately.  We go out to eat, but no place we new, no place I want to write about.

We’re hooked on watching the Olympics, and there seem to be only 6 commercials, which they repeat endlessly.

I tried watching boxing on the Spanish language channel the other night, and while I can understand 5 or 7% of what they are saying, they talk so rapidly it makes my ears tired.

Near the end of the “skiathlon” today, the announcer said “we’re here until the finish”, then promptly went to commercial.

In the women’s figure skating, the very wise announcer said that the young woman had “elements of Bob Fosse” in her routine.  She was wearing evening gloves and skating to the music from Sweet Charity, so this wan’t exactly a deep analysis.

Yesterday we vegged in front of the TV all day, today I had to get out of the house.  We called Sigrid, and motored up to Napa for lunch at Ristorante Allegria, right smack downtown. 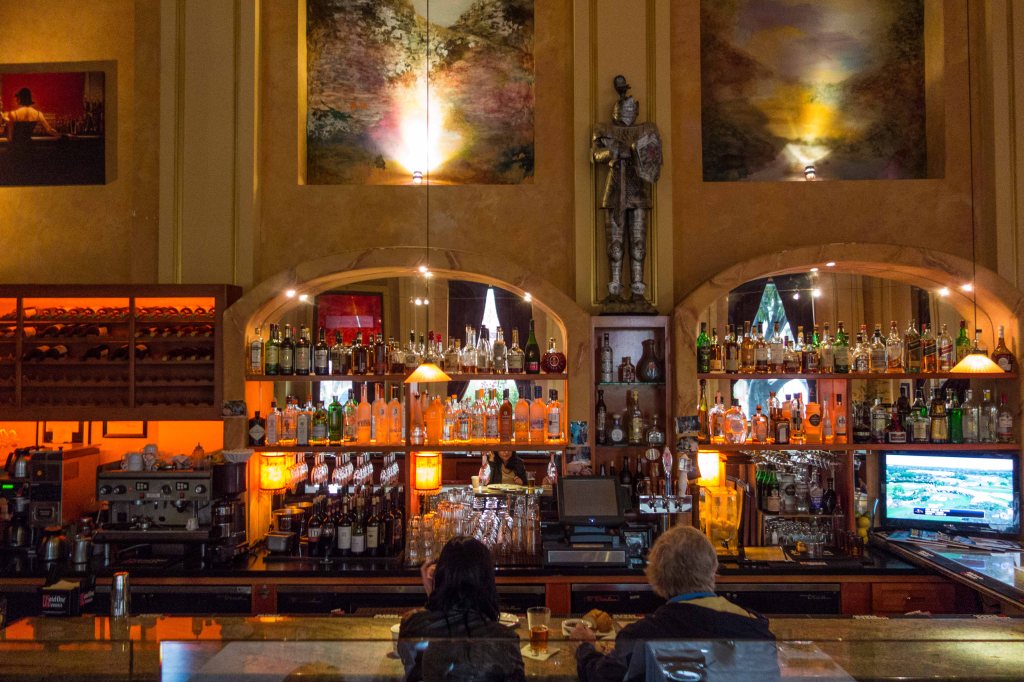 I like the building–high ceilings, lots of art, tables with linen. I think there’s a nice patio, but this wasn’t the day to find out.

The extensive Italian menu should satisfy whatever you are in the mood for.  Gail started with the carpaccio:

The carpaccio was great; the lentil soup I ordered was bland and pedestrian.  On the other hand, the bread was fresh and served with an oil and spice mix that was superb.

Sigrid had the Napa Cabbage salad–a bad culinary pun that you’d think every restaurant in the city would be using.  The joke is poor, but the salad was great:

It would be heretical for me to go to an Italian restaurant and not have pasta.  I had something picked out from the menu, then the waiter told us about the special.  Spinach fettuccine with fresh tomatoes, prawn, mushrooms and a light cream sauce.  I ordered it without the mushrooms, of course.

I loved my lunch.  Gail ordered the same thing, plus the mushrooms minus the prawns.  It was even good that way.

Service was decent, except that the waiter seemed to be congenitally incapable of listening.  I ordered my iced tea with lime and got lemon.  Twice.  I asked for the check to be split one way, and he did it another way.  He just wasn’t listening.

Prices are reasonable, the food is good, the service is sort of adequate, the facility is attractive.  I like Ristorante Allegria, you will too.