Missed it by that much

Not me.  I missed it by a mile.  Our first two boards this afternoon were both disasters–very good opponents bid a cold slam and a cold game that others didn’t.  We were down 14 imps right off the bat, through no fault of our own, and it went downhill from there.

The ones who were close were Don and Linda.  They had two good games today, and ended up less than 2 imps out of the overalls.  Don hit the overalls a few years ago with Mike, and had grand hopes of doing it again with the better looking Bandler, but it was not to be. Quelle domage.   At least we got to play the finals of a national event, and that’s an honor all by itself.

Dinner was a highlight at least.  We went to the Dallas Chop House, a very high class beef joint just 4 blocks away.  I knew it was classy when I saw a banquet table with one of the big, rich clients, her team and their spouses.  We were definitely in the tall cotton.

Lots of fine restaurants begin by bringing the diners an amuse bouche, a little gift to brighten the event.  I’ve never gotten a glass of sparkling wine, too.

I don’t know about the wine, but the egg was phenomenal.  Where they find white truffles this time of year I can’t imagine, I just know I appreciate it.

After the amuse, we were served marvelous, fresh popovers with rosemary butter.  It reminded me of The Rotunda at Neiman Marcus–and that may not be a coincidence.  Neiman Marcus is across the street.

Instead of a salad, I had the tenderloin tartare.  This could easily have been an entree: 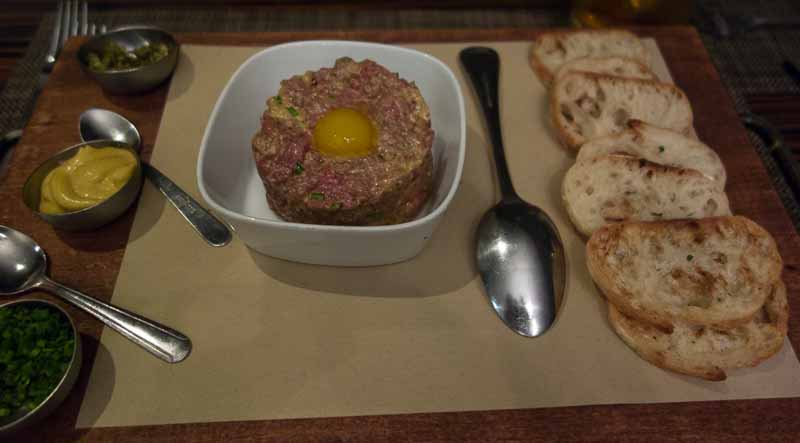 As upscale as hamburger gets.

Raw chopped tenderloin of prime beef, a quail egg, chives, capers and Dijon mustard.  It was great, and the only affordable beef on the menu.  I’m not capable of spending $52 for a rib eye steak.

Instead, I opted for the scallops, served with sweet potato puree, vanilla braised fennel, charred pineapple and “chili strings”. 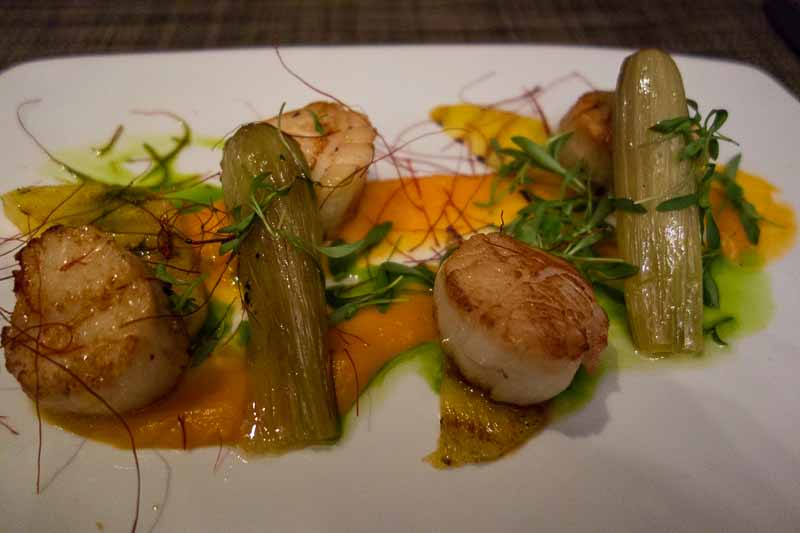 Linda had the same thing.  We both liked it, but she didn’t care for the fennel and didn’t think it fit with the rest of the plate.

Those tiny red things are the chili strings.  They have no flavor that we could discern and seemed more like stiff dental floss.

Back to salads–Linda had the roasted beet salad.  The beets were intriguing–we’ve never seen anything quite like them. 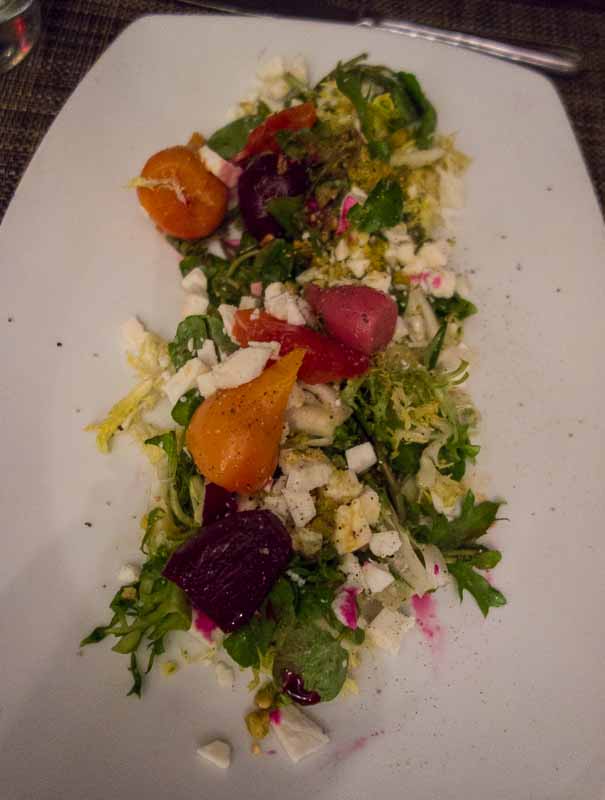 Very interesting treatment of the beets.

The service was very, very good.  There were so many staff taking immediate care of our every tiny need, it made me wonder if Texas is one of those states where the minimum wage is as low as $2.30 an hour for employees who get tips.  In any case, I made sure to tip well.

Tomorrow Mike and I start the Silver Ribbon Pairs.  Wish us luck.

One thought on “Missed it by that much”