The end of the line

For us, at least.  We’re in Lake Louise, the train has gone on.  I presume that all manner of people will continue to wave at the train–we certainly saw many of them on the way here. 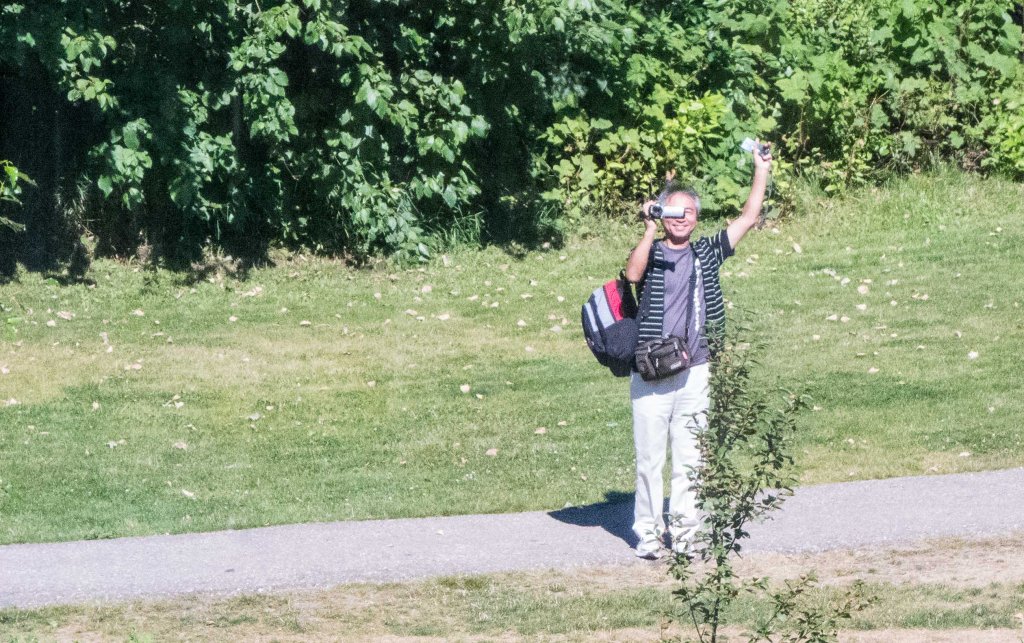 We left Kamloops at 6 bloody 15 in the morning.  Not that I’ll ever miss the Hotel 540, but i always believed that early to bed and early to rise and the gals all go out with other guys.

We were seated in the back of the rail car, so the first day we had the second seating at meals.  They switched, and the second day we were first (something  Biblical about that).  Breakfast was just as good as the day before; I had the egg benedict (singular, one egg, one crumpet) which is served with “Montreal meat”, a smoked ham product that isn’t bacon and isn’t anything else you’d recognize.  Not bad, not great.

I had to stick my head in the kitchen and see the tiny space where they managed to put out so many good meals in a short time.

A marvel of efficiency and design–the railroad kitchen

The trip was delightful–we climbed many feet, travelled along 7 different rivers and just enjoyed the scenery.  And enjoyed and enjoyed.  Over 13 hours later we arrived in Lake Louise.  Gail is certain that she has had enough rail travel for her lifetime.

Along the way passed through the spiral tunnels–two places where the train entered a mountain, made a complete circle and emerged facing the same direction but further up the mountain.  It was a brilliant engineering solution to the difficult problem of getting the train up a hill too steep to otherwise climb and descend safely.  Our train was over 2000 feet long, but they tell us that some of the freight trains can be over 10,000 feet or 2 miles, and at times you can see them entering and exiting the spiral tunnels at the the same simultaneously.

We crossed the Continental Divide, which is also the border between British Columbia and Alberta.  From this side, all rivers eventually flow to the Atlantic or Caribbean Oceans.  The mountains here reach up to 12000 feet, with broad flat valleys carved out by glaciers.  It is truly breathtaking.

Sunday, we had a private car tour of the Yoho Valley, which is back where the spiral tunnels are.  First, though, we woke up and looked out the window at the incredible lake, and the morning reflection of the mountain and glacier.

Lake Louise in the morning.  Not a bad view for a hotel window.

The water has the magnificent turquoise color due to “rock flour”, microscopic flakes of crushed limestone from the glacier.

We started out at Lake Moraine, just a few miles away and almost as picturesque. 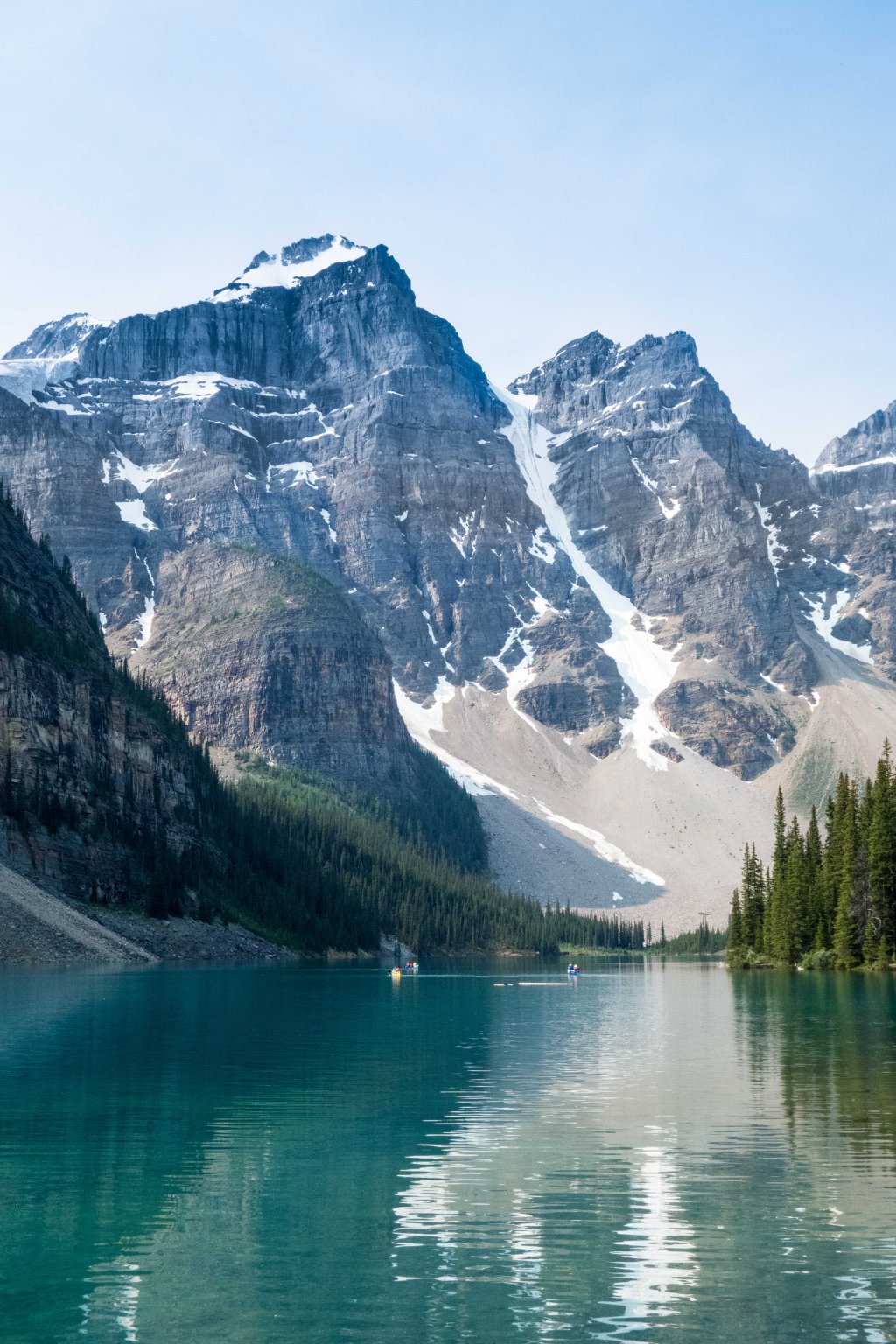 Here we got the laugh of the day–there is a log jam at the near end of the lake, and we saw a couple of idiots out on it:

That isn’t ground they are standing on, it’s a little log jam.  We saw both of them slip and step into the water.  Why were they there?  Looking for a drowned cell phone.  How the phone got there we never determined.  Somehow, they did indeed find it, although I think it is most likely a paperweight by now.  Perhaps they needed the water soaked carcass for their insurance claim.

Next up was Takakkaw Falls–the third highest falls in Canada our guide said.  Takakkaw is a Cree word for “it is spectacular”.  Or so they tell us.

I posted so many wildlife photos from Africa that it seems wrong not to have one here. 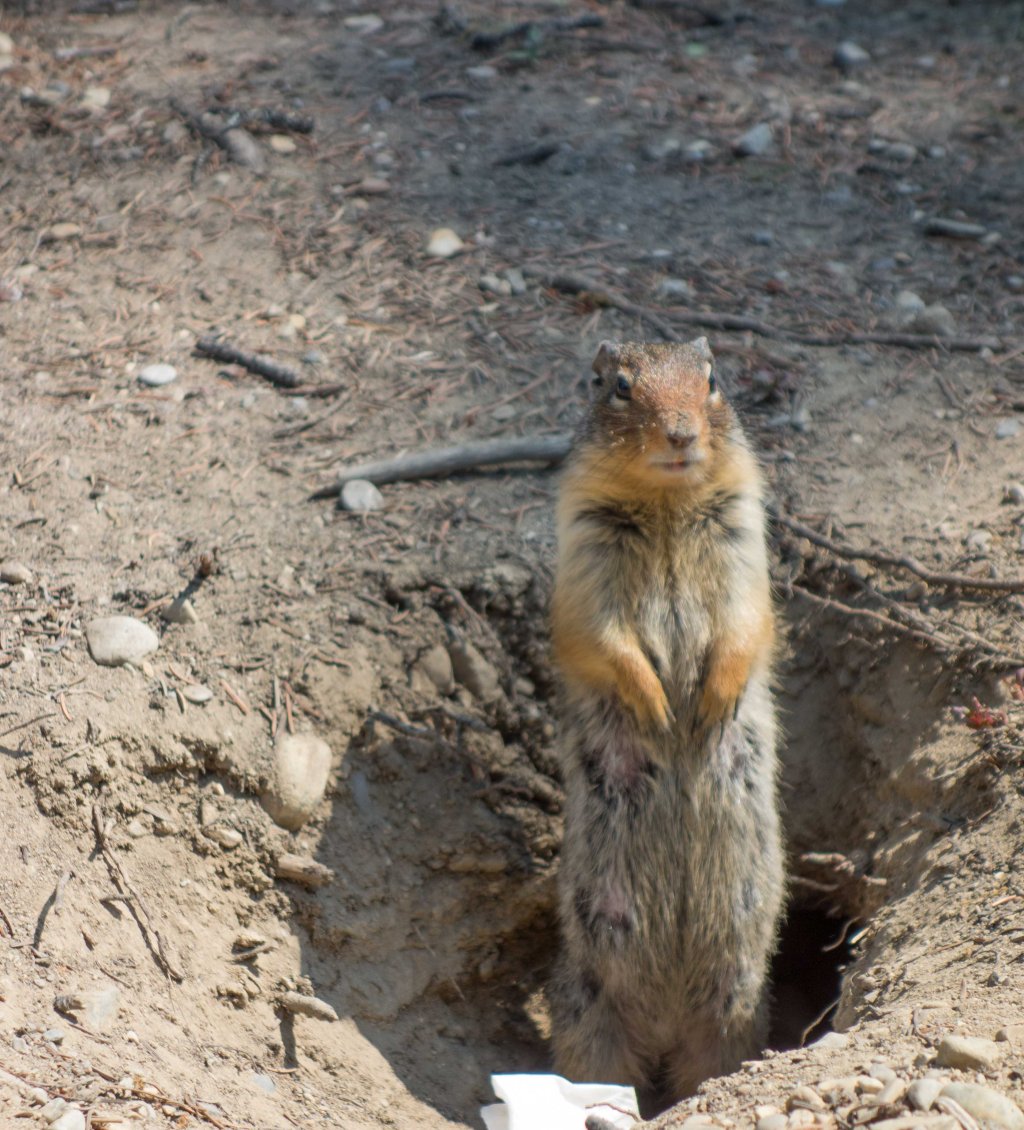 The dangerous wildlife of Alberta

This guy is so tame I just know he’d eat from your hand if you had a peanut or slice of banana.

Next we looked at yet another beautiful lake, this one full of tourists struggling with canoes.  I thought everyone learned how to paddle a canoe in Boy Scout or Girl Scout camp, but that isn’t true.  It’s fun to watch the non-natives do silly things.  I also noticed that in 100% of the cases, even in this post-feminist world, the man sits in the back of the canoe and the woman sits in the front.

This is Emerald lake:

Sure is green water.

You don’t have to know what you’re doing to rent a canoe. You do have to wear a livevest.

Finally, we got back to the hotel, took a nap and went to dinner.  I sadly underestimated how busy this place is, and wasn’t able to get a reservation for dinner at the premier restaurant on site.  My friend Doug Jacobs told me the most romantic meal of his life had been on the top of this hotel on his honeymoon ages ago, but that facility is closed entirely now.  We ended up at Lago, the Italian restaurant in the complex.

Gail and Ross began with the carpaccio, and could not stop raving about it.  Ross said if we were on a cruise ship he would have had another.

I had the lamb chops/lamb sausage dinner.

The beets and potatoes were as attractive a presentation as I’ve seen.

The presentation was excellent, and the food was equally so. We all enjoyed our meal, as we expected we would in this world class resort.

Ross is out of here early tomorrow, and we are taking another private tour for the day, ending up at the airport for our flight home.  Beth the Travel Goddess took pity on us and upgraded our seats a bit so we shouldn’t be quite as cramped on the way home.  Life is good.