This is a great cruise; we’re having a wonderful time.

They claim they have the best system available, but here we are in the middle of high-tech Europe and it works lousy.  Two years ago we were on the Mekong river in the middle of God-forsaken wilderness Cambodia  and had a decent signal all the time.  AMA Waterways was up to the task, Viking is lying.

Okay, I got that off my chest.  It’s been frustrating as hell sitting here with photos to share and opinions to opine and not be able to do so.

I’ll start with Rothenberg.  Cozy little town, overlooked by the development of the 18th century and then most of the second world war, it has become the Carmel of the Main River.  We took a special expedition there, about a 45 minute bus ride from the boat.  The bus leaves you just outside the town walls, because the streets are too narrow to accommodate it.

Half-timbered architecture is the hallmark of medieval German building.

This is a small town inside the 1000 year old walls, not destroyed by Allied bombing and beautifully maintained.  Their main industry seems to be tourism, so everything is cute and kitschy.   They are very, very big on Christmas decorations, all year long.

If you can’t have a big sign, you can have an old car painted with the name of your store.

In the old days, the gates to the city were closed at night.  If you were out too late, tough luck.  There was a very small door you might get the guards to open, if you paid them a fine/bribe.

The wall is well preserved, as is the gate house:

An entrance to the city

The narrow, cobblestoned streets don’t appear to have changed in the last 600 years.  Going here is very much like going back in time.

Probably cleaner than it was in 1350, but pretty much the same.

The group went to lunch at a restaurant that has been in the same family for over a century.  They own vineyards outside of the city, and serve their own wine. 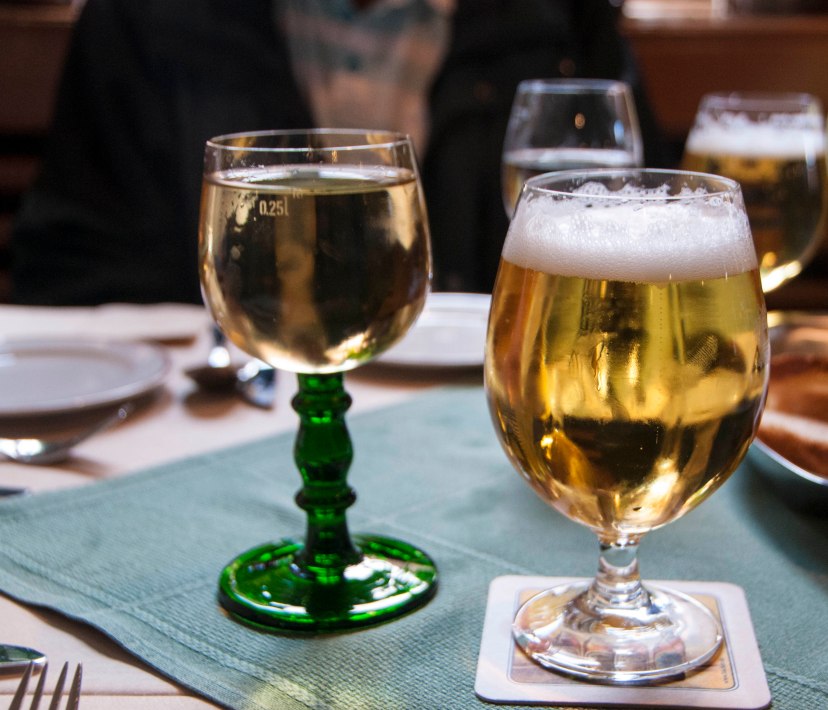 Wine and beer make good photos. Gail liked the wine glass, but wanted ones with a brown stem. Not to be found, unfortunately.

The meal was the traditional bratwurst and sauerkraut.  You get this a lot in Germany, and I always like it.

The sauerkraut is marinated in wine. Not a bad idea.

The local pastry delicacy is a call a schneebälle, snow ball.  It’s basically the trimming from a pie crust crumpled up in a ball, baked, and covered with powdered sugar, cinnamon or chocolate.  Everybody told us how dry it was in the middle, so I ordered mine with a cup of tea to dunk it in, but didn’t really need to.

I think I’ll finish this with a panorama from the guard house over the valley and river Taube.  Then I’ll change the header on the blog to another panorama, facing back towards the first.

The green valleys of Germany, looking down on the river Taube.

One city down, plenty more to talk about.  Hope the internet keeps up for a while.