Home for a week, it’s time I finished the trip here on the blog.

Dachau and then BMW made for a very full day, but there was no way I was going to leave Munich without taking the kid to the Hofbrauhaus, where they have been brewing beer since 1589.

It’s a huge facility, with arched, painted ceilings, an oom-pah band pumping up the crowd, and a horde of staff delivering huge mugs of beer. I got absurdly, stupidly, shamefully drunk here in 1974; I’m glad they let me back in.

The young master, looking like an American tourist should.  One of these beers is mine, but he drank a good part of it.

The next morning we took the train to Zurich, enjoying the ride through the Alps, a fine meal on the train and on-time arrival at the huge Zurich Bahnhof.

My God, is Zurich expensive!.  Worse than London, worse than Tokyo.Get into a taxi, and it is 6 CHF (Swiss Francs) for the flag drop, 80CHF an hour waiting time–which is important, because Zurich has horrendous traffic and it takes forever to get anywhere.  The taxi from the train station to the hotel is perhaps 1 mile, and drained 25CHF (about $27) from my wallet. (The abbreviation “CHF” is derived from the Latin name of the country, “Confoederatio Helvetica”.)

The good news is that it’s a beautiful city where everything works, the streets are clean, the people are nice and the food is good.  I guess all that is worth a few more francs.

With one full day to explore, we laid out a plan–first stop, the Kunsthaus. A very modern museum with an extensive collection including three pieces by Van Gogh I hadn’t seen before: 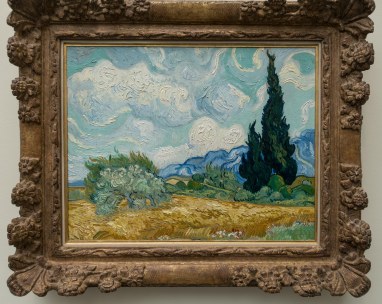 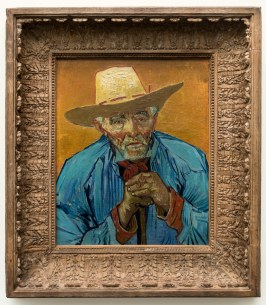 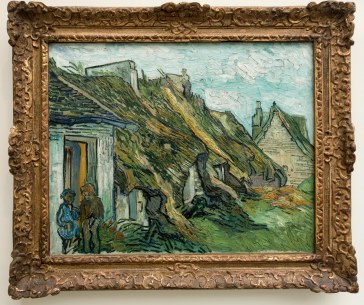 There was an Alberto Giacometti exhibit, perfect for a pair of sculpture lovers.  Since his signature style was very tall and very thin people, his work is almost impossible for me to photograph, but I found one piece with 4 small figures on top that demonstrate his work: 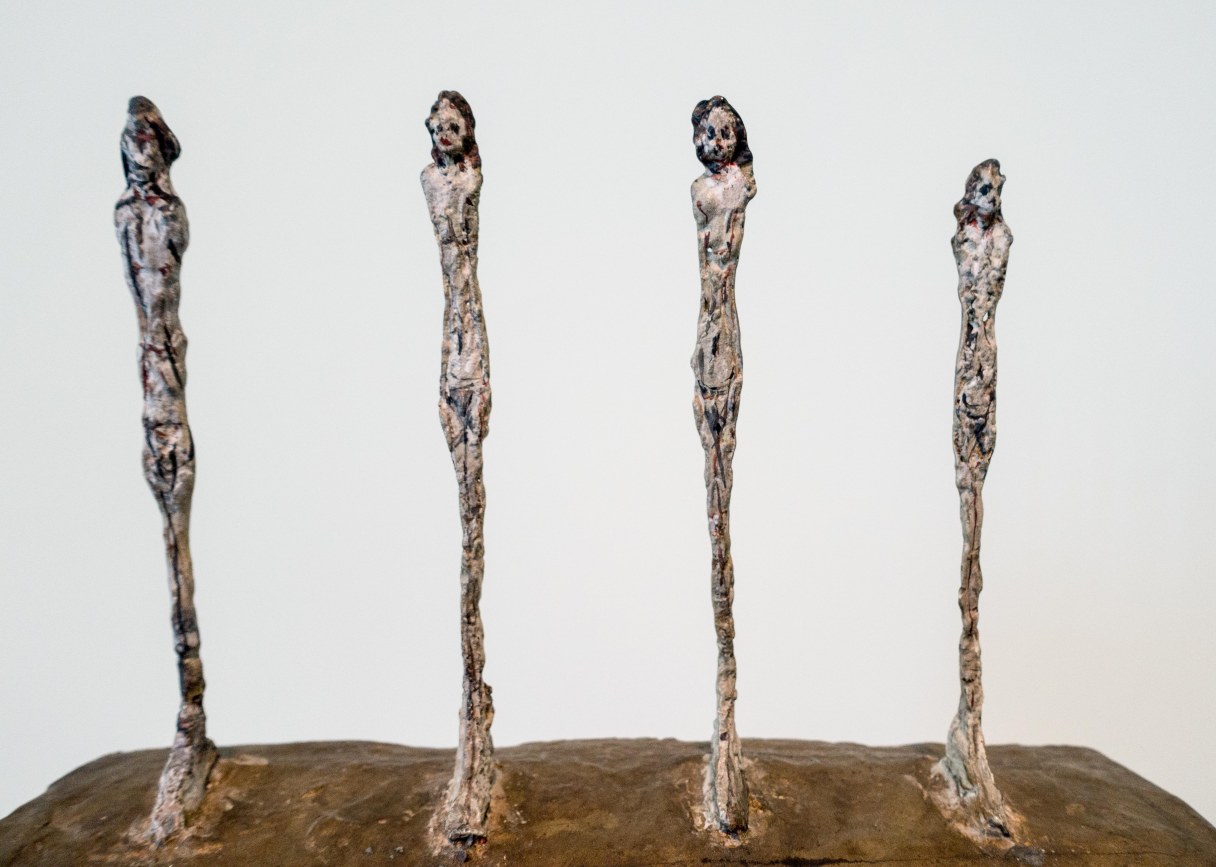 Finally a Giacometti I can photograph

Fully sated with art, we dedicated the afternoon to a city tour by bus and boat–Zurich lies on the waters of the Zurichsee, Lake Zurich, a 24 mile long narrow lake.  It was a very warm, sunny day and Zurichers were out in force on their beaches, docks and boats.

After the boat cruise came a long and expensive taxi ride back to the hotel, and the difficult decision of where to eat dinner.  We settled on the Kronenhalle, reputedly #80 on a list of the world’s top 100 restaurants.  For this, we ironed our shirts and dug out the good shoes.

Kronenhalle has been a city landmark since 1921, frequented by noblemen, politicians and artists, by Sigmund Freud, Albert Einstein and James Joyce, who wrote much of Ulysses in the bar. The art collection is staggering–the walls are covered with a priceless variety of work by Chagall, MIro, Picasso, Rodin, Matisse, Bonnard and Giacometti.

Gail and Toby. That’s a Miro behind them.

Kate and I in front of a Chagall.

The dining room is what you would expect–rich wood, heavy silver, thick linen.  Even the flowers were spectacular: 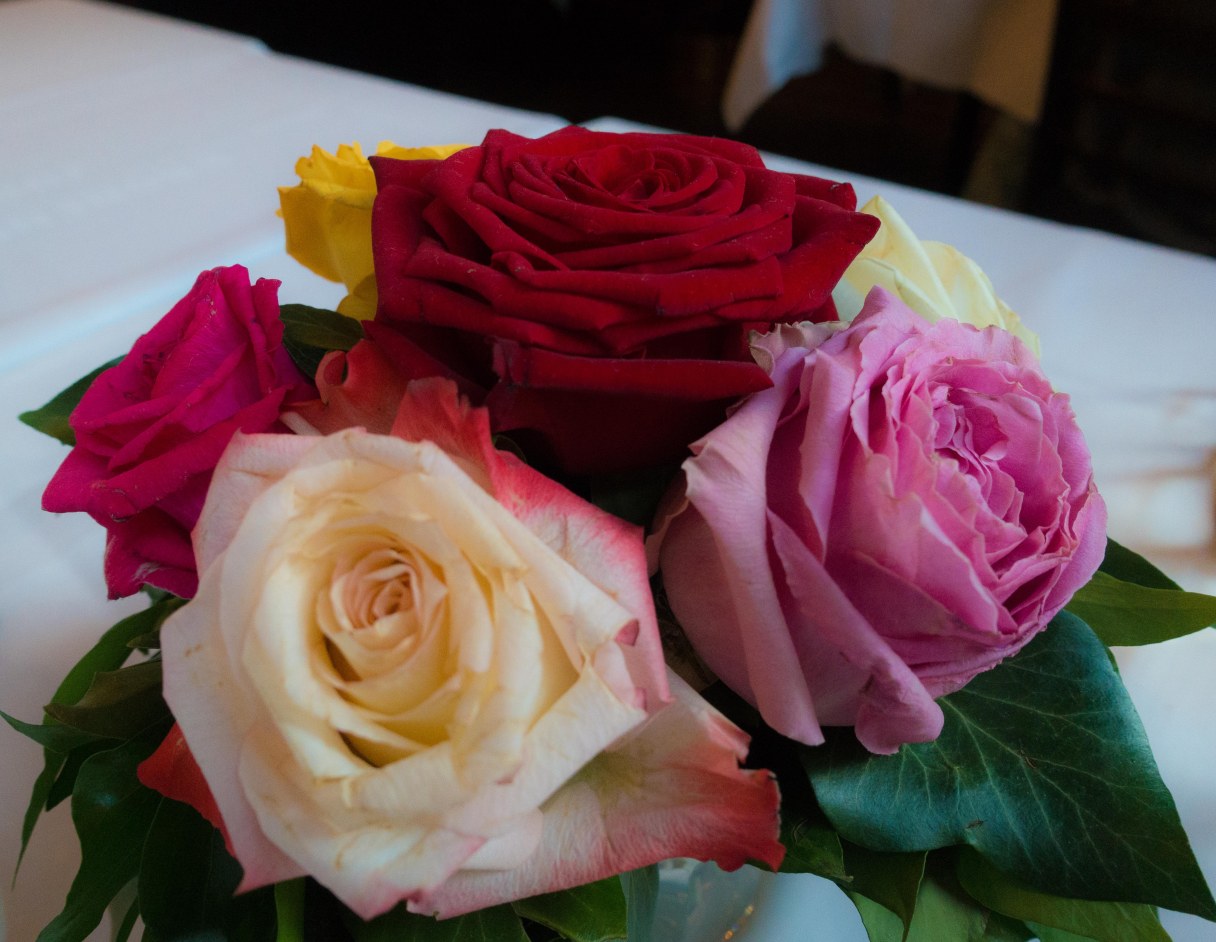 Roses for the table

The surroundings are stunning, but the food is what matters.  Kate started with avocados served in a fashion I’ve never seen: 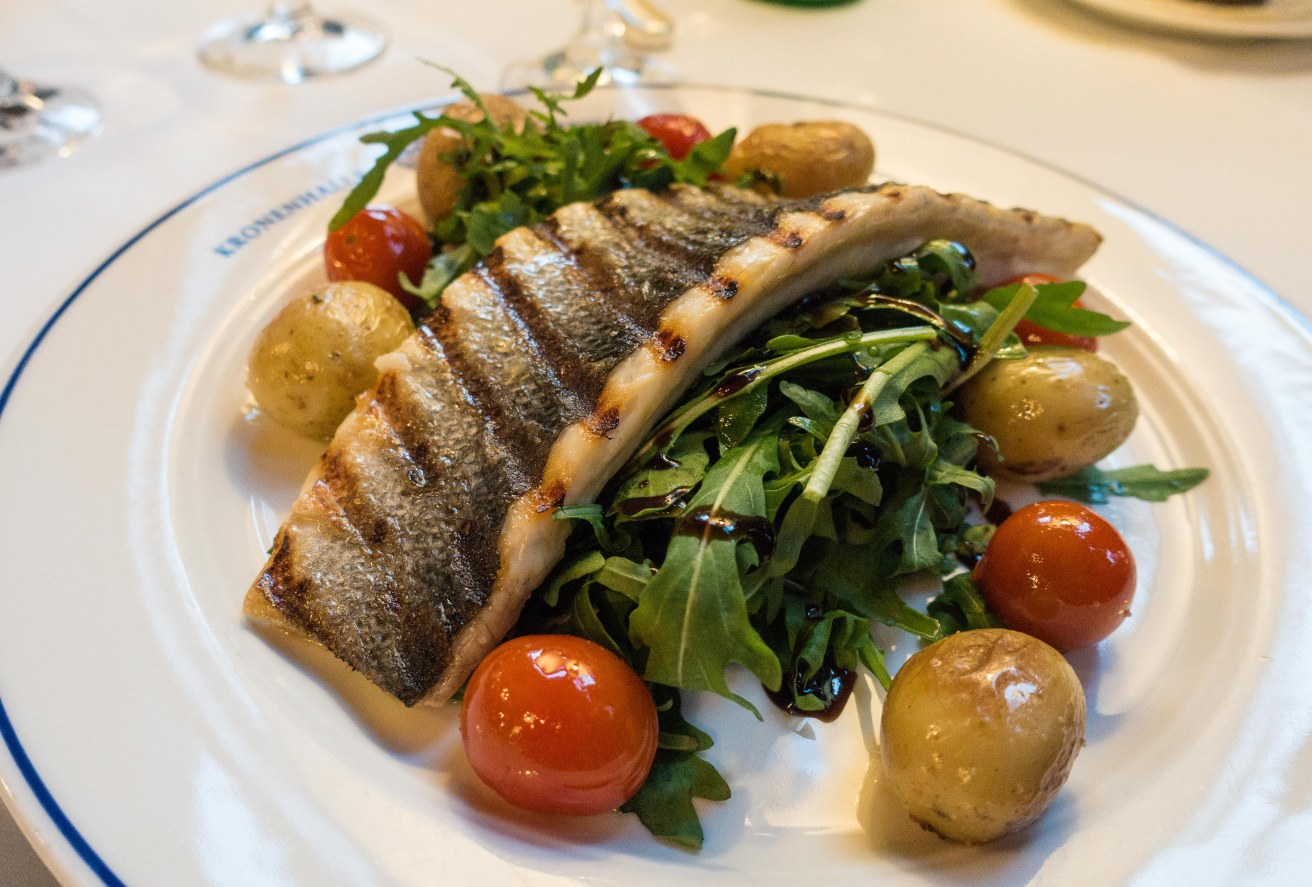 As lovely a presentation of sea bass as you will ever see.

I can’t resist venison, even when it comes with chantarelles:

Gail and Toby had the lamb chops–carved tableside from a rolling cart.  This is more show biz than culinary necessity, but it’s a nice touch.

Is he from central casting or the culinary academy? And who cares?

Dessert was more theater–we ordered the chocolate mousse, and they brought out a huge crock of pudding, artfully scooping it into large quenelles then napping them with creme anglaise.

A sumptuous dinner in spectacular surroundings, the perfect end to an excellent vacation.

Then the bill came.  I expected it to be horrendous, but it exceeded my expectations, so much so that I stopped to check it, and found a tiny error–CHF138, to be precise.  Just about $150 too much. Getting that corrected lowered the bill to the neighborhood of the national debt of Bolivia, but it was worth it.

I thought we had a 10am flight, but the airline said they had changed our flight to 7am, which is far too early for our taste.  It took a bit of wrangling and sternly reminding American Airlines that when THEY change my flight, I get to change to any other flight that is more convenient without charge.  We ended up with better flights and got home sooner than expected.

This was a delightful trip,  There were a few bumps, but that’s what adventure is all about. Life is good.

5 thoughts on “Catching up”