Restaurants come and go, that’s the way of the world.  We used to enjoy Patrick David in the Danville Livery, then it closed and became Martini Sky.  That closed, and something new opened--Dana’s.  Since we knew the way, tonight we gave it a try with Micky and Linda.

Dana’s has had a minor facelift since its last incarnation, and it’s all for the good.  High backed booths do an effective job of making the place much quieter–which was my main complaint about Martini Sky.  The tablecloths, heavy napkins and other smaller changes work to deaden the sounds from the bar and make the restaurant an enjoyable place to have a meal.  There are a goodly number of tables outside, with heaters above them.  I think it would be pleasant to try one even on a crisp evening.

The menu has plates both large and small so you can share with friends or tuck into a 16 ounce rib-eye all by yourself.  There is even a 40 ounce bone in rib-eye designed to be shared.  It must be a heck of a thick slab of beef since it takes 45 minutes to prepare.

I enjoyed the butternut squash soup, which had a particularly nice presentation: 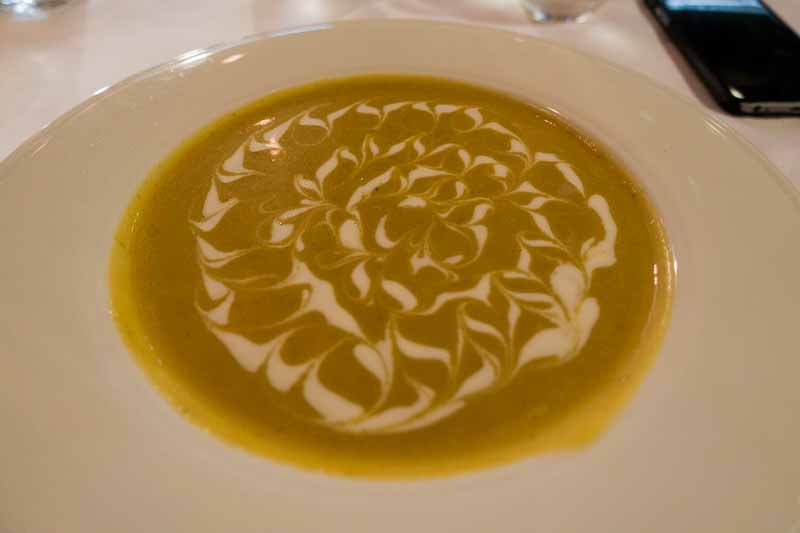 I’m not much of a squash eater, but I almost always love this soup.  Dana’s makes it thick and rich with a hint of cinnamon, then decorates the bowl with a ribbon of creme fraiche turned into art.

My entree was the daily fish special–pan seared halibut.

The expertly cooked halibut was topped with a dollop of pesto and served on a potato/pumpkin cake. Just plain old potatoes would make more sense, but I guess you need to chi-chi up the menu to look fancy.

Linda had the crab cakes, which are really an appetizer and not quite enough for an entreé.  Tasty, though:

There are crab cakes somewhere under the salad.

Fortunately, Mike had a filet and was willing to share with Linda.  She was saving room for dessert anyway, and that gave her an excuse to enjoy the creme brulee.

Service was decent, not great. I wanted a 5:30 reservation, but could only get a table at 5:00.  We got there late, but at 5:30 we were almost the only table seated.  I don’t understand the science of reservations.

As you would expect, the winelist is deep.  Gail ordered a La Crema chardonnay, and for the first time I can remember she thought the wine was off and sent it back.  The house was completely cooperative and her second glass was satisfactory.

Dana’s is a fine restaurant, and much more pleasant to visit than Martini Sky was courtesy of all the sound deadening.  Prices are reasonable, not cheap. I expect we’ll go there again.