Toby, Gail and a friend

Friday, the day before the big surprise, Toby rented a car and we drove up the coast sightseeing.

The first stop was Caesarea, which seems mostly like Carmel by Mediterranean on a smaller scale. There are 2 or 3 blocks you can walk full of little art galleries, curio shops and lovely places to eat.

Further up the coast, we came to Acre, or Akko, or Acco, depending on which sign you were looking at.  The British called it Acre when they owned it before WWI, and it was they who built the walls around the city.  These days it’s mostly knows as Akko.

The city is very mixed, roughly 70% Arab and 30% Jewish, with tiny streets crammed with cars slowly creeping around looking for parking.  We enjoyed the stroll through the market to where we planned to have lunch.

The marketplace is vibrant and colorful.

It’s easy to be a travel photographer here, hard to cut down to just a couple of photos. 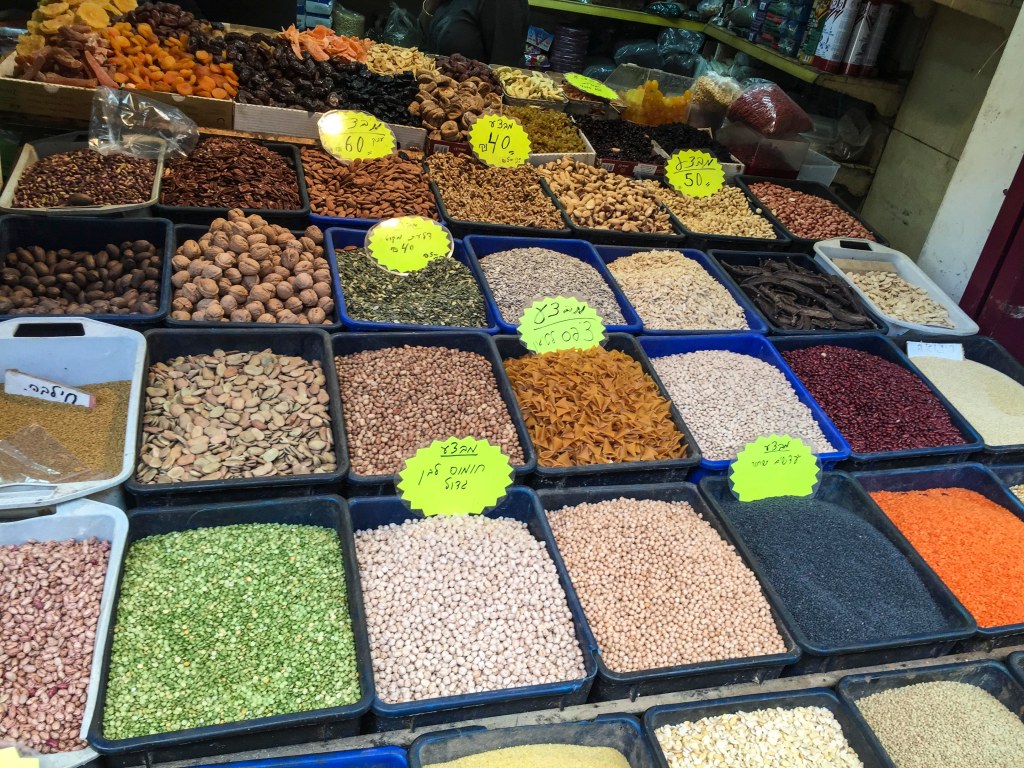 The rows of spices are like the paints in a watercolor kit.

In the midst of the crowded hustle of the street, we came upon “Hummus Said”,  a restaurant experience to remember.

Hummus Said serves hummus, the ground garbanzo bean that is a staple of this part of the world.  That’s all, just hummus.

It is impossibly crowded, with a line out the door.  The line moves quickly though, because this is not a place for fine, slow dining.  You get to your table, order, eat, pay and get the heck out in very short order.

As soon as we sat down the waiter was there.  No menu.  You can have hummus, hummus with chickpeas or hummus with brown beans.  Order fast, people are waiting.  We chose one of each.

30 seconds later we got our bread, fresh baked pita, and plates of pickles, onion, tomato, olives and peppers.  Another minute and the hummus hit the table.  Time to eat.

Pickles and pita, tomato, olives and onion. All the fixings for a hummus lunch

They brought us forks, although that would embarrass the locals, who expertly swirl the pita in the hummus and eat.

The noise level is enormous because there are so many people eating, so many waiters and runners shouting, a kitchen cranking out dishes endlessly, bussers cleaning the tables to turn them over to new client in seconds after you get up.  The energy level is like Grand Central Station on Friday afternoon, and never stops. And yes, it’s really good hummus.  You can fool me, but not the locals who live on the stuff. Hummus Said is an experience not to be missed.

After our fine dining,  we drove back down the coast, stopping in Haifa to see the home of the Baha’i religion, the newest monotheistic religion in the world, having been formed less than 200 years ago in Persia.  It is essentially an offshoot of Islam, recognizing Abraham, Moses, Jesus and Mohammed, among others as messengers of God along with their founder, Bahá’u’lláh.  Their religion is very peaceful, and heavy on gardening and human outreach.

Haifi is built where the Carmel Mountains run straight into the Mediterranean.  We drove to the top of the mountains to view the city, the bay and the Baha’i gardens.  The view was spectacular:

The Gardens run all the way down the hill.  Believers climb up the 750 steps as a devotion.  I’m not that devoted to anything. 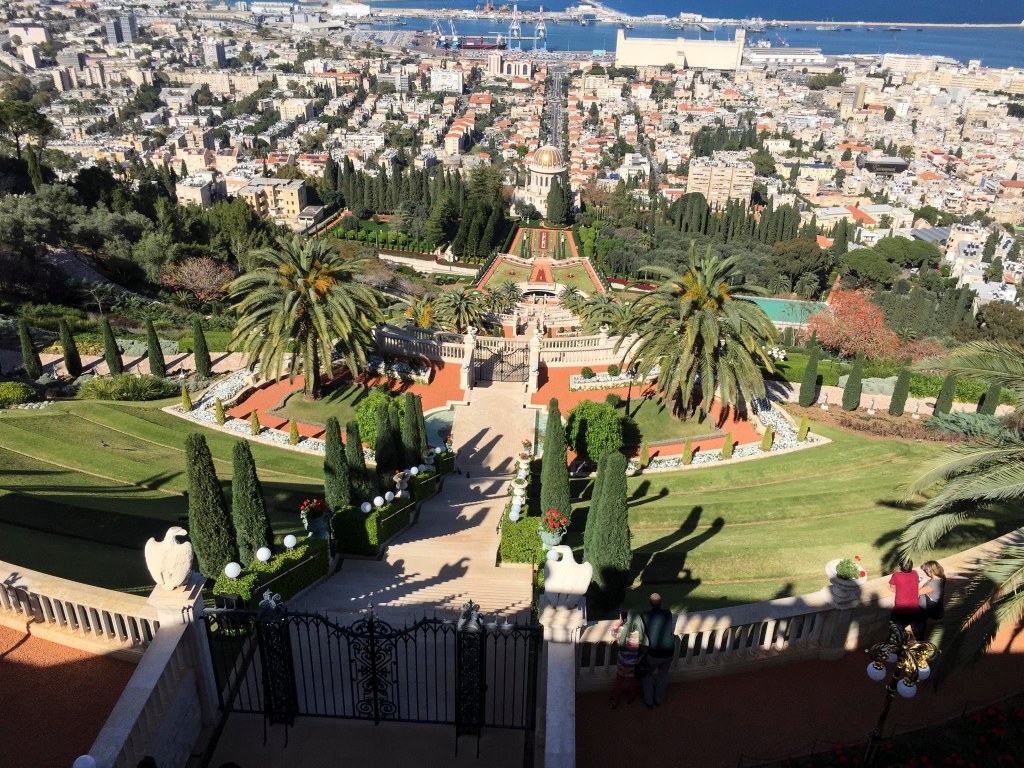 The Baha’i Gardens, going down 750 steps

A religion that believes in peace, education and gardening is one I could get behind.

Full of hummus and gentled in our souls by the Baha’is, we drove back to Tel Aviv.  That was a good day.