We had all the fun we could in Israel, then it was time to leave.

The much vaunted security at Ben Gurion airport was no problem at all–when your name is “Chris” they don’t think you’re likely to be a Muslim terrorist.  Or maybe I’m just too old to be dangerous.

Beth, the Travel Goddess™ got us a room in One Aldwych, a very modern upscale hotel right in the heart of the West End.  We’re here to see theater, might as well be close to the action. 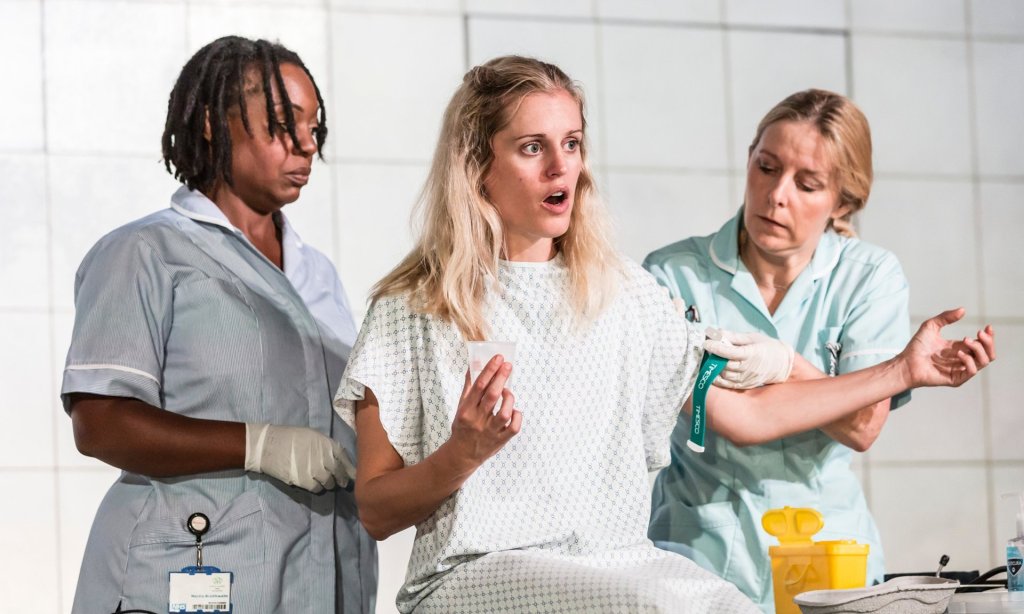 Denise Gough stars in People, Places and Things at the Wyndham in London

There was a movie by the same name last year, a romantic comedy.  This isn’t the same thing.

This is a play about addiction, not a subject I have much sympathy for. The protagonist is a not quite so young woman who is incapable of telling the truth or facing the realities of her situation.  She is an actress, and attempts to draw parallels between her work and the process of rehabilitation, but I’m not buying it.  If she was as phony and irresponsible as an actress as she is as a patient she’d never work.

The play itself goes along with this theory, however, in that the set is designed to be the back of a stage–there is even an audience seated upstage behind the actors–which is also a clever way to increase the size of the house by 66 seats.

In her first interview with the therapist, the actress raises some of the major objections to 12 step programs, and I had hope that they would be seriously and intelligently addressed.  Not to be.  The play toes the line on following all the “steps” slavishly as though they were a miracle cure, even though the overall success rate of such programs is 5-15%.  Just a little aside from the not unbiased blogger.

The set itself is brilliantly designed, converting  effortlessly from stage to office to house to dorm room.

The best part of the play are the scenes where our heroine is having the DT’s or seizures or withdrawal  or just general madness.  The staging here is magnificent and innovative, with half a dozen actresses at one time playing the same part.

The worst part are the scene changes that are accompanied by insanely loud noise.  Louder does not mean it’s more important.

Barbara Marten plays both the solid, consistent therapist and the worn down harpy of a mother.  As one she is the emotional anchor, as the other she is an anchor dragging her daughter down.

The acting and directing of People, Places and Things  are excellent. I know that most people will have sympathy for our poor little shattered actress, I’m just not one of them.