The Opry is Smokin’

I like theater, of pretty much any kind.  Drama, comedy, musical, ballet,magic, review, if it’s onstage I’m up for it.  The Smoky Mountain Opry was like nothing I’ve ever seen before, and it was a pleasant way to spend an evening.

Tickets are $44, $2 off for seniors and $5 off for veterans.  We’re all seniors and Bill spent 4 years in the Air Force keeping Abilene TX safe from enemy invasion, so with tax it cost $151 for three of us to see the show.  They weren’t busy on a Wednesday early in the season so I sweet talked our way into second row seats.

The theater is a large modern facility, although it was perhaps 15%  full.  Our seats were perfect, and the show started right on time.  They have 3 shows a day here, a morning variety show, an afternoon magic show and the evening Opry.  Everything is run professionally.  I wasn’t pleased to have to wait to get in because they were busy taking photos of everyone, trying to increase revenue just like the cruise ships do, but less efficiently.  The gift shop offers the usual hats, t-shirts and tacky souvenirs, along with a selection of ties with the ten commandments and other biblical injunctions.

Promptly at 8, the emcee comes out, spends a few minutes selling, selling, selling for the other shows (including other theaters that are affiliated, such as the Hatfields and McCoys dinner show) and the photo packages, then the music starts.

Big time music.  Professional music, professionally presented on a state of the art stage with lasers, hydraulics, flames and all the tricks, like the musicians flying in from the wings.  The sound system is rich, filling the room without blasting your ears out (I still had ear plugs, though).

The look is spectacular

There was more than just music.  I was completely entranced by the juggler/comedian, “Slim Chance”. He did some of the finest juggling I’ve ever seen, all the while keeping up a country corny patter.

Slim capped off this act by balancing a flaming barbecue on his chin while spinning a rope with one hand and spinning a disk with the other.

After Slim there was country music, then a delightful acrobat act, verging on ballet.

Following an intermission, the second act began with a tribute to Broadway musicals.  They did Seasons of Love,  from Rent, then an impressive medley from The Lion King.  The costumes were stunning, as well as the music.

Then followed a segment with music from the 60’s.  This show has something for everyone. 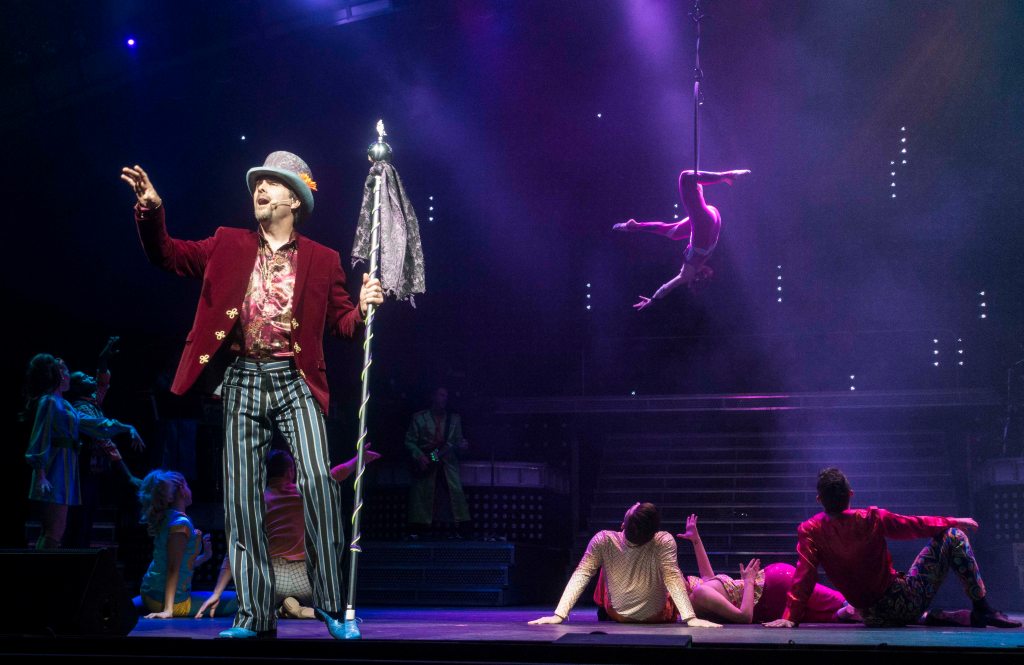 The acrobats from the first act add background atmosphere. 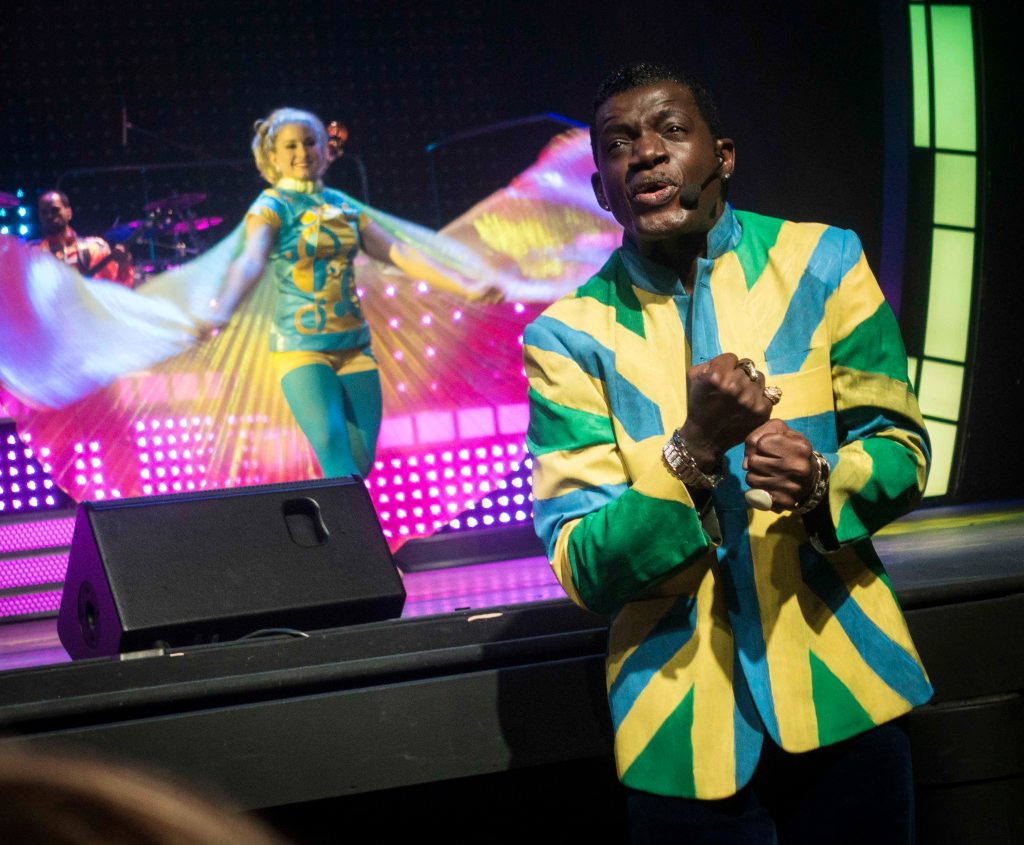 Coming out into the audience to bring the music to the crowd.

The next segment was all about Tina Turner. 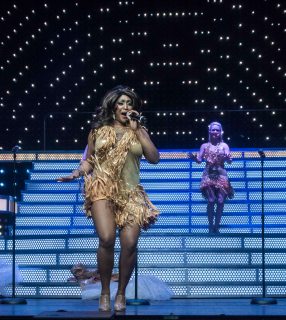 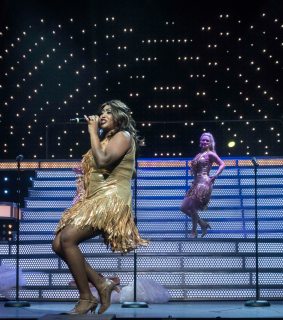 You can’t have a show in the South without some Gospel music.  Long white beaded dress, bright white light and How Great Thou Art seems about right. 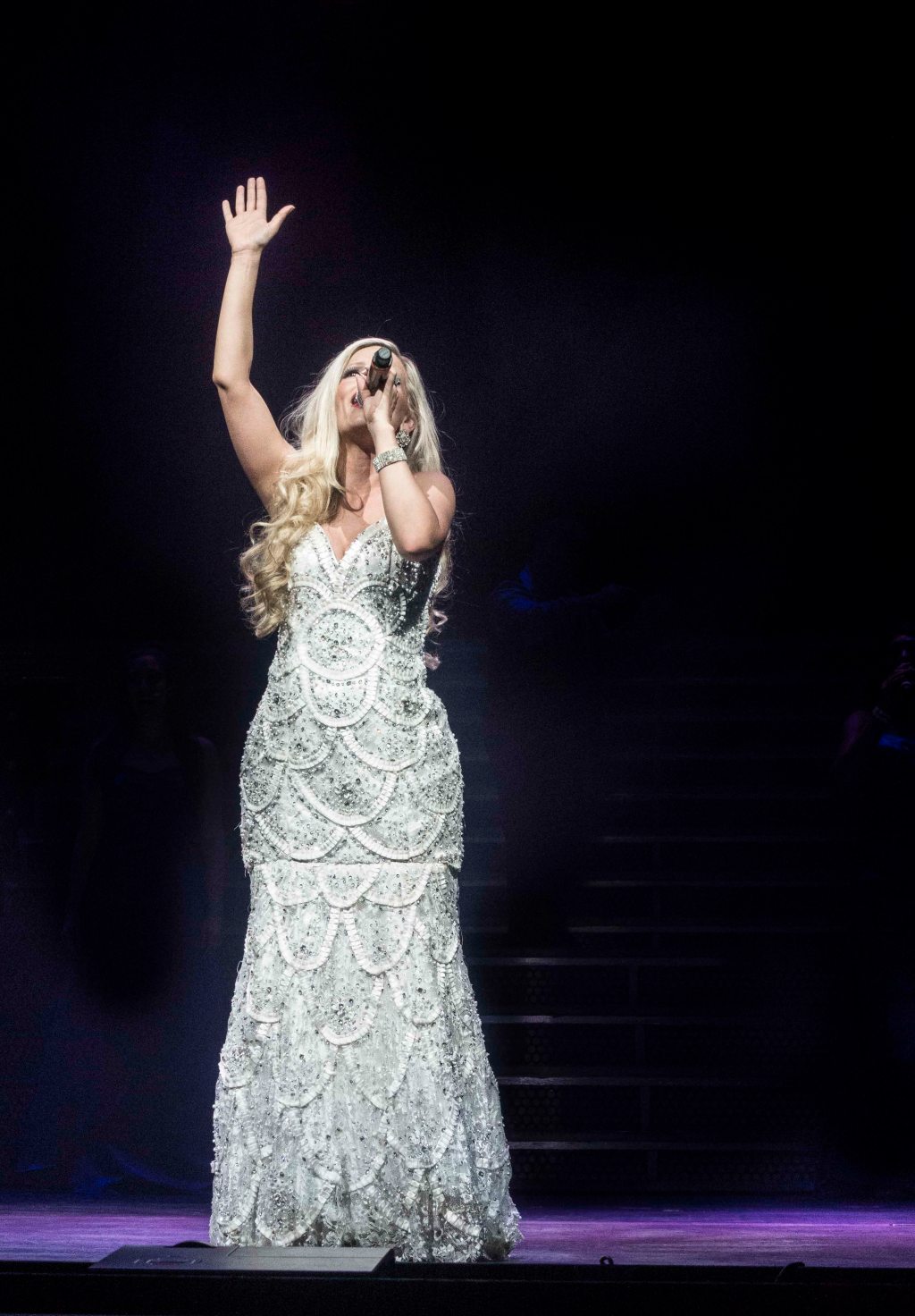 I hear Leonard Cohen’s Hallelujah performed by almost everyone.  This show provided a version with entirely different lyrics, the sort you would expect in a Baptist church.  I guess you have to know your audience.

For the ending, the show turned patriotic.  All veterans were asked to stand for a round of applause, then, without any sort of introduction, on a mostly dark stage with just the background screen, the various singers began to sing the Star Spangled Banner.  I’ve never thought of the national anthem as a song you would make part of the performance before.

The show winds up with a flashy red, white and blue finish, leaving everyone feeling energetic and uplifted.

At precisely 2 hours and 15 minutes, the show is over.  The entire cast is in the lobby to shake hands, sign autographs and greet the customers.

The Smoky Mountain Opry wouldn’t make it on Broadway, but Pigeon Forge is a long was from New York and for what it is you get one hell of a good show for your $50.  We surely enjoyed it.

One thought on “The Opry is Smokin’”