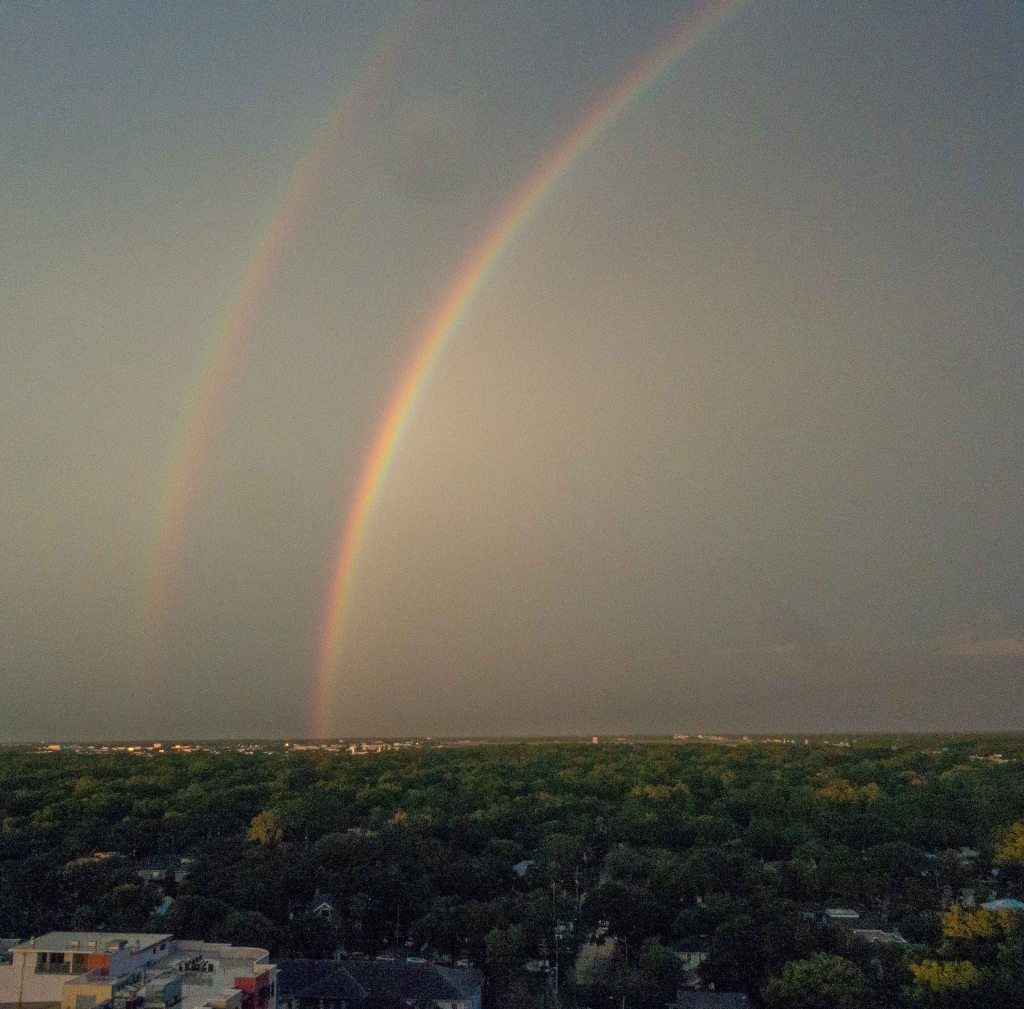 A magnificent double rainbow. Too huge to get the whole thing with my camera

We’re in Orlando again, Gail to see Susan and me to go to Photoshop World, the annual gathering of the photographic tribe put on by Kelby Media.  I’ve done this once before, and learned so much that I’m doing it again–they keep upgrading Photoshop all the time, and you have to keep learning and studying to keep up.  My brother David is here with me, and we’re having a ball.

This event is quite large, with perhaps 2,500 attendees.  Yet, I think it’s considerably smaller than it was a few years ago, when there were more like 4,000 people.  Definitely, there are fewer corporations exhibiting in the trade show area–I was hoping to see Wacom here, and there isn’t the large Adobe presence I saw last time.

Nonetheless, there are many, many classes available–I am booked from 8:00 am til 6:30 pm tomorrow, and still can’t take every class I want to because sometimes there are two attractive options at the same time.

There are things I don’t understand.  In the trade show are there is a set which is lit by one of the lighting companies, and a model working.  People are splayed out all around the area taking advantage of the situation to take pictures.  I don’t know why.  What do they think they can do with a photo of a model on a set?

Here are the people: 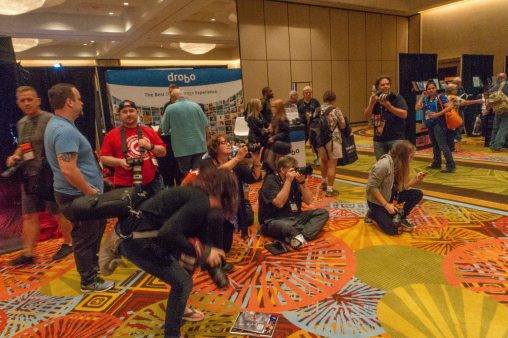 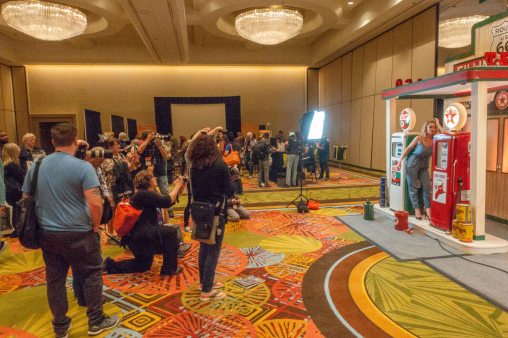 And here is the model and the set: 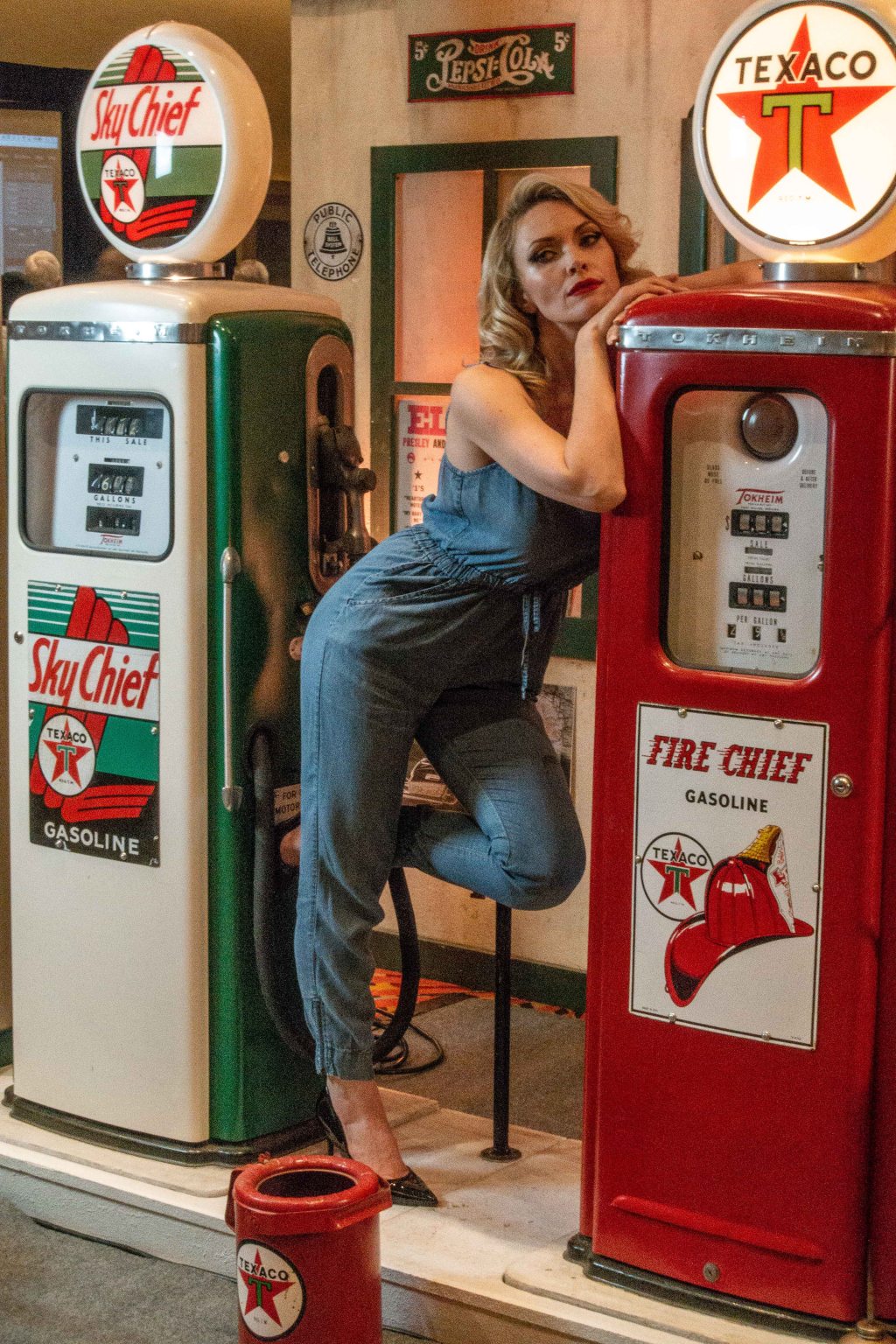 She’s beautiful, the set is interesting, and I don’t think I’ll show this photo to anyone to prove what a great photographer I am.

This evening there was a party, and Scott Kelby, the big mooha of this organization got to perform with his band.  Scott started out in life as a drummer and guitar player, then took up photography, then started teaching Photoshop and now seems to do everything all at once, and do them all well.  His band, Big Electric Cat, may only perform once or twice a year but they sure sounded great tonight. 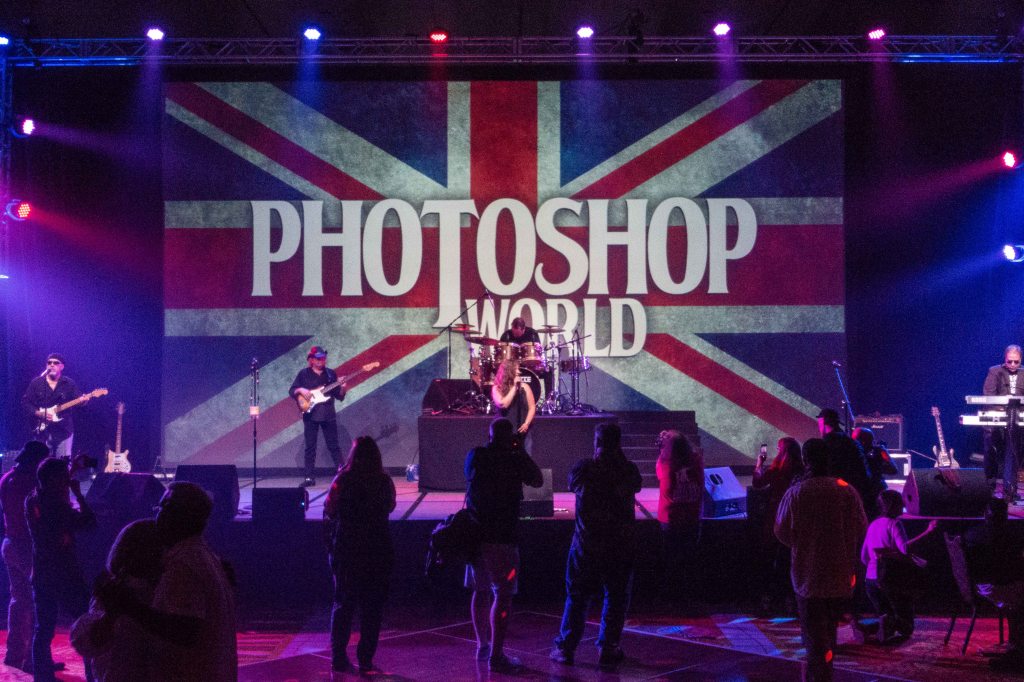 That’s Scott to the far right on keyboards.

Naturally, in a room full of camera nerds there were thousands of pictures taken–at a normal concert you can’t get close to the band, you can’t bring a big camera in, you just use your phone for low quality videos.  Here, lots of middle aged dentists with high end photo gear got to be concert photogs for a night, with no restrictions like “three songs only”. 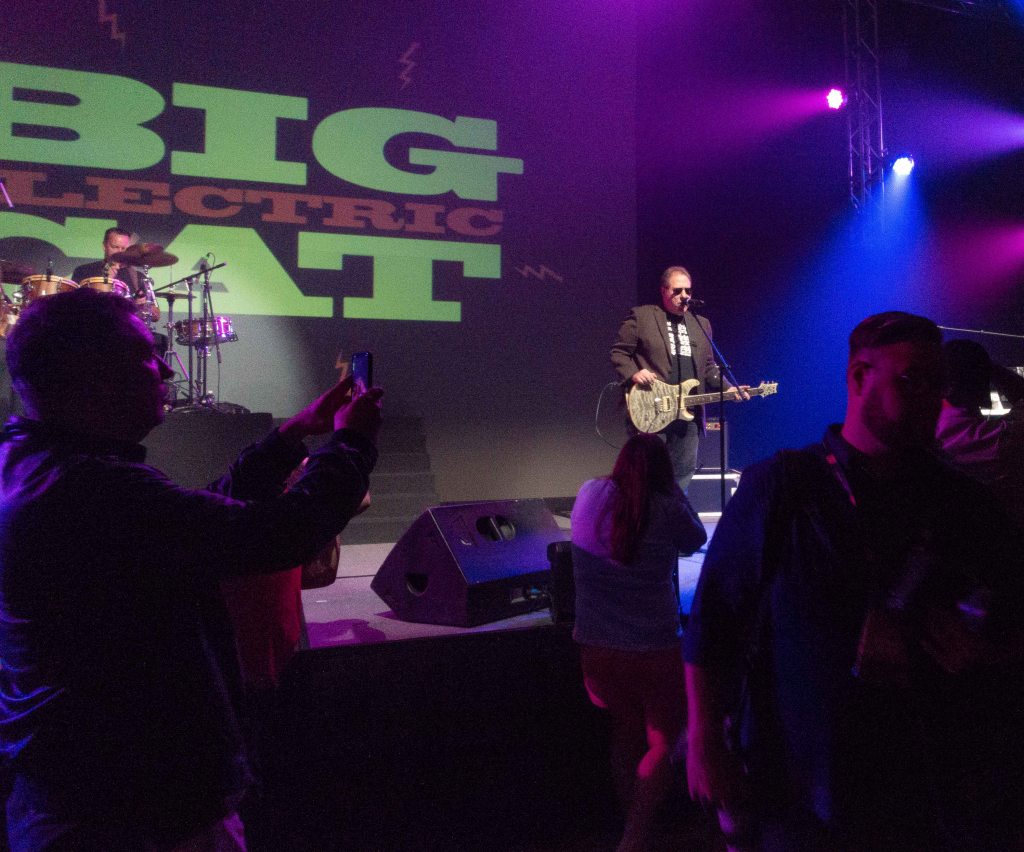 Apparently there was one pizza store executive who had some fun in the same vein. 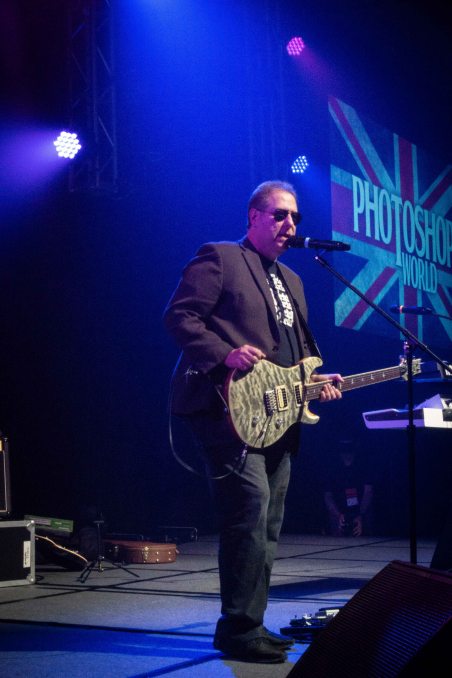 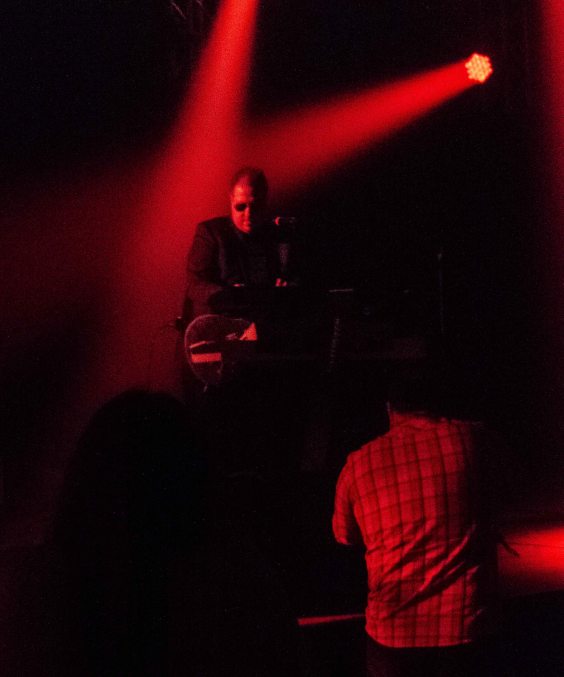 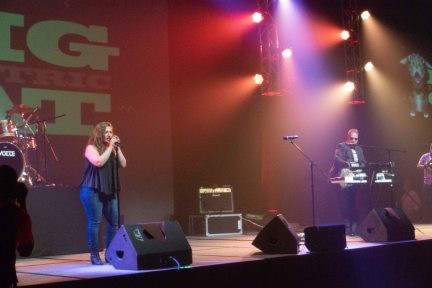 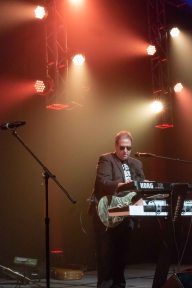 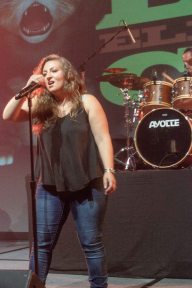 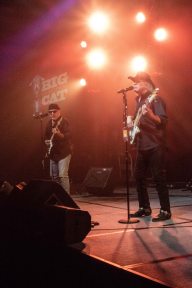 After Big Electric Cat, some of the Photoshop World instructors who are also musicians got on stage to jam a bit, and I took these photos of my favorite instructor, Rick Sammon.  I once came to Orlando for a weekend just to take a day-long class from him, and will take two of his classes here 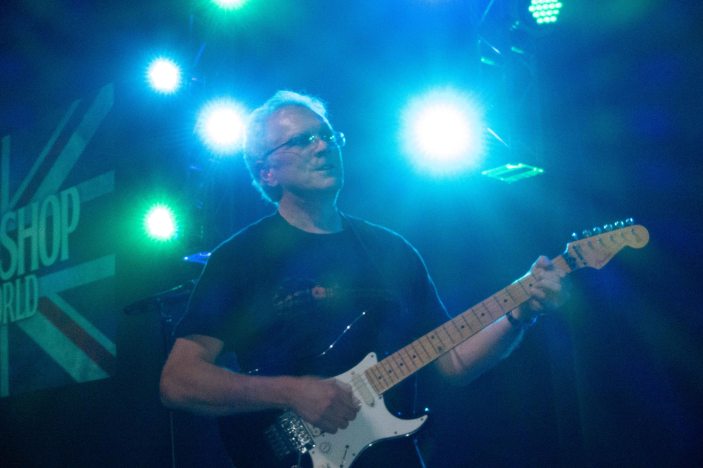 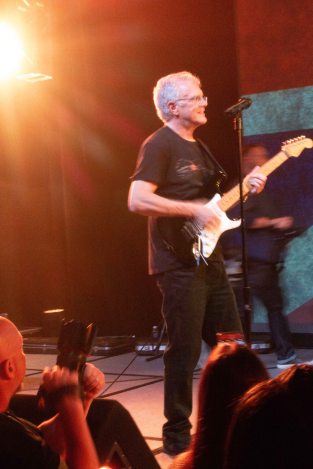 This event is great–lots of fun, professionally executed and so much to learn.  I’m glad David and I are here, and I hope to be a better photographer when we get finished.