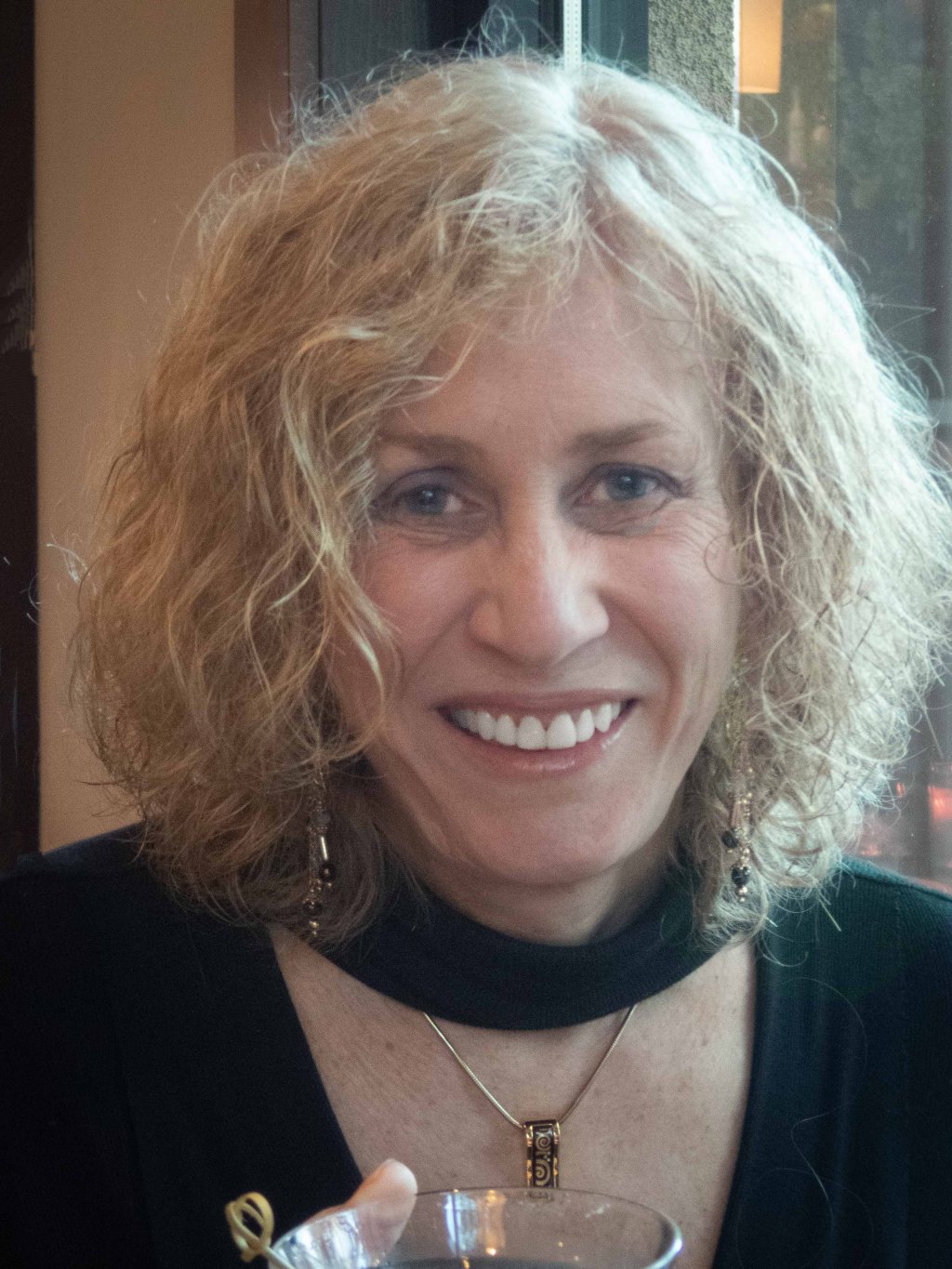 Our friend Gayle Everett had a birthday this week, and we went to celebrate at one of my favorite local places, Esin.

Established over 20 years ago in Danville as Cafe Esin, they are now just Esin, right off the freeway at Sycamore Valley Road.  The chef/owners are Curtis and Esin deCarion, hence the name.

Esin deCarion is the pâtissiere and in my opinion the heart of the operation.  Lots of restaurants have great halibut, only Esin has the best desserts in the county.

To get to dessert, though, you have to eat dinner first.  That’s no challenge here.  The waiter told us the soup of the day was potato garlic, so that’s what I ordered: 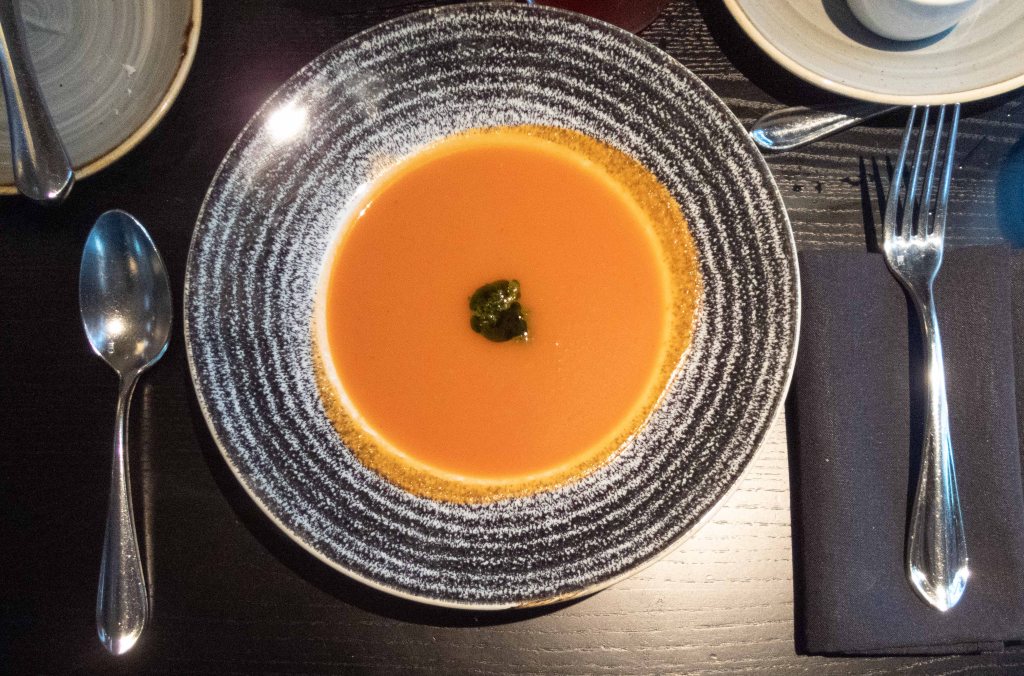 This is beautiful.  It just isn’t potato garlic–the kitchen switched up on him and gave up tomato soup.  Excellent tomato soup, and Gail certainly enjoyed hers, but my heart just wasn’t in it, so back it went and I ordered the burrata instead: 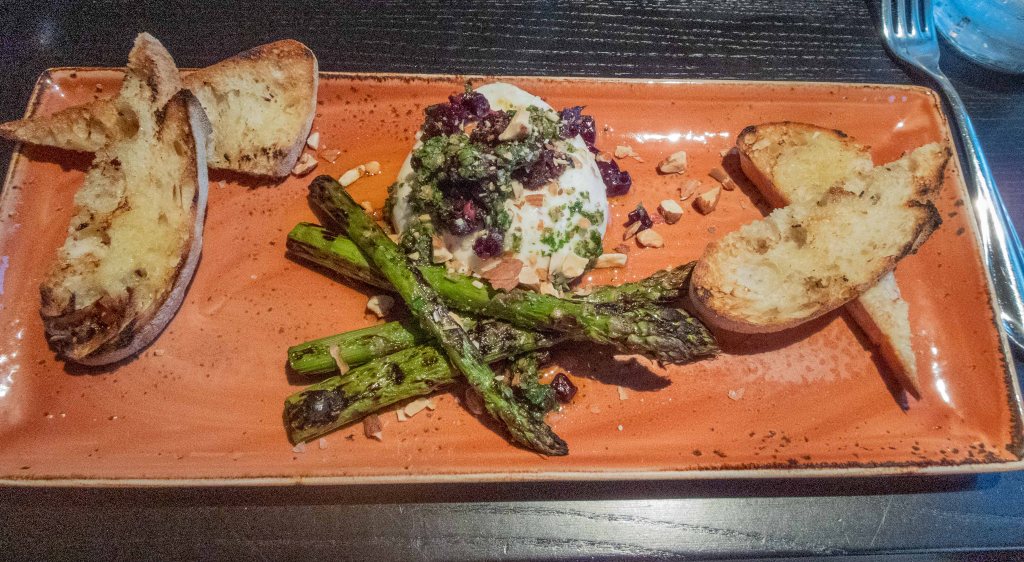 That’s a generous serving of fresh burrata cheese topped with diced beets and pistachios, grilled asparagus, and warm (not cold and stiff) grilled bread.  Really an appetizer large enough to be shared.

I fell for the lamb chops, served with green garlic risotto. 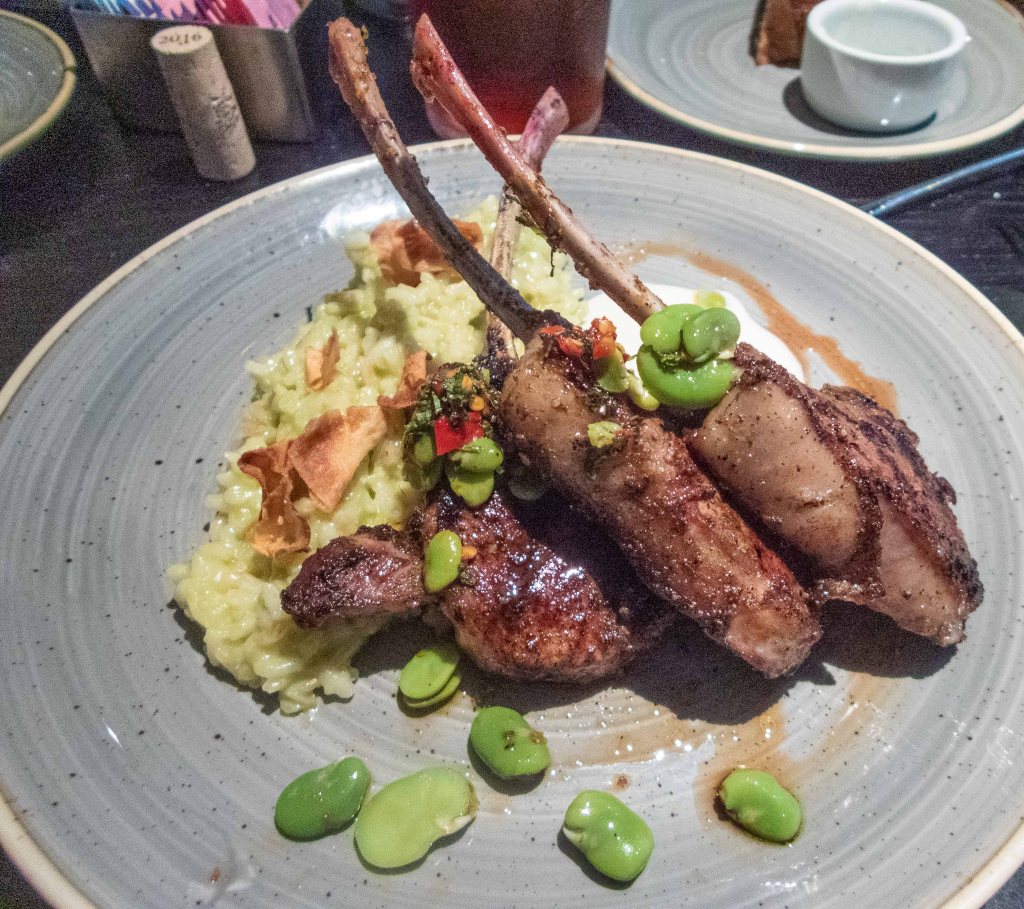 Lovely chops perfectly cooked, savory risotto with a delicate garlic flavor, beautifully plated.  This is everything an entree should be.

Our friend Barbara joined us for the evening. 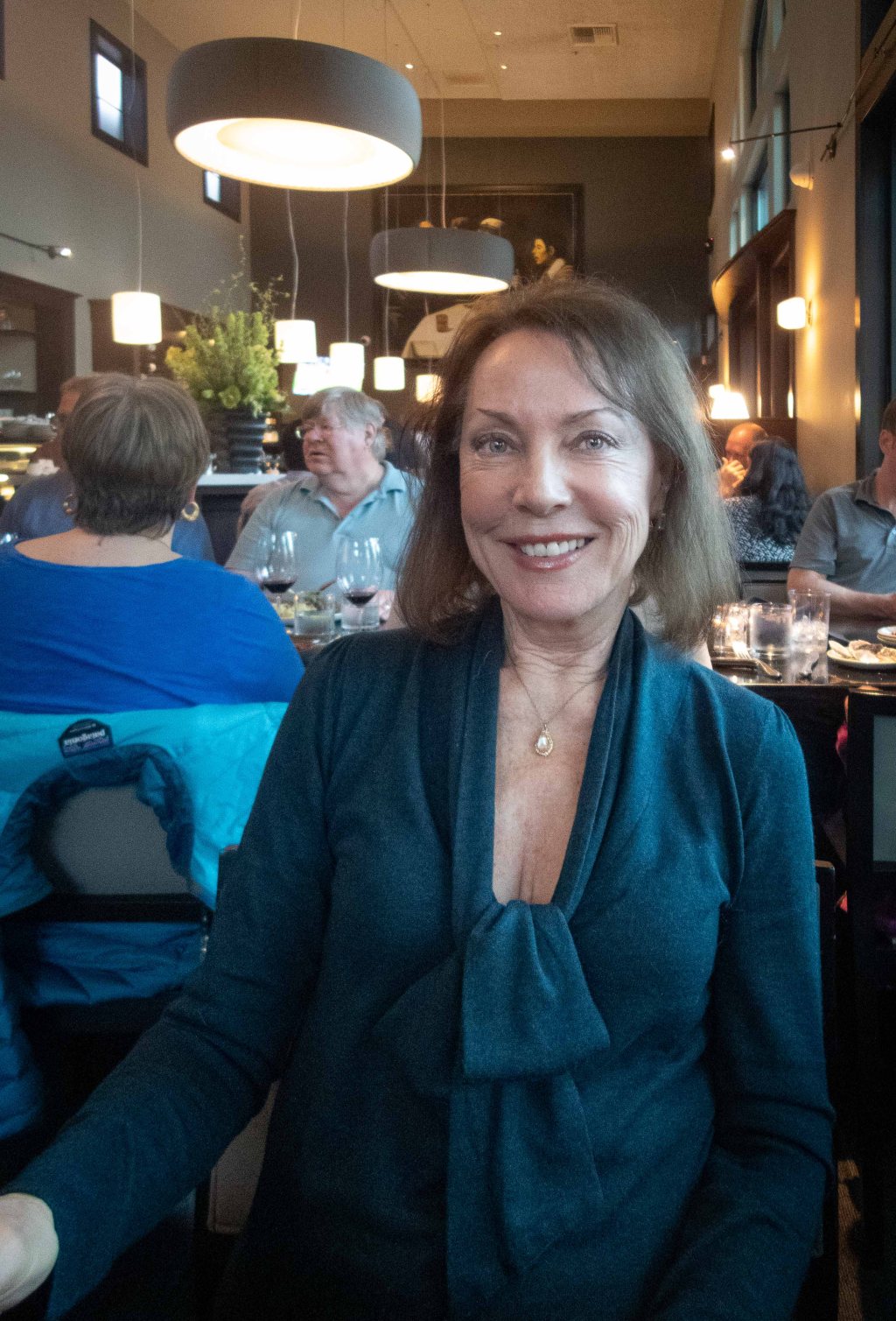 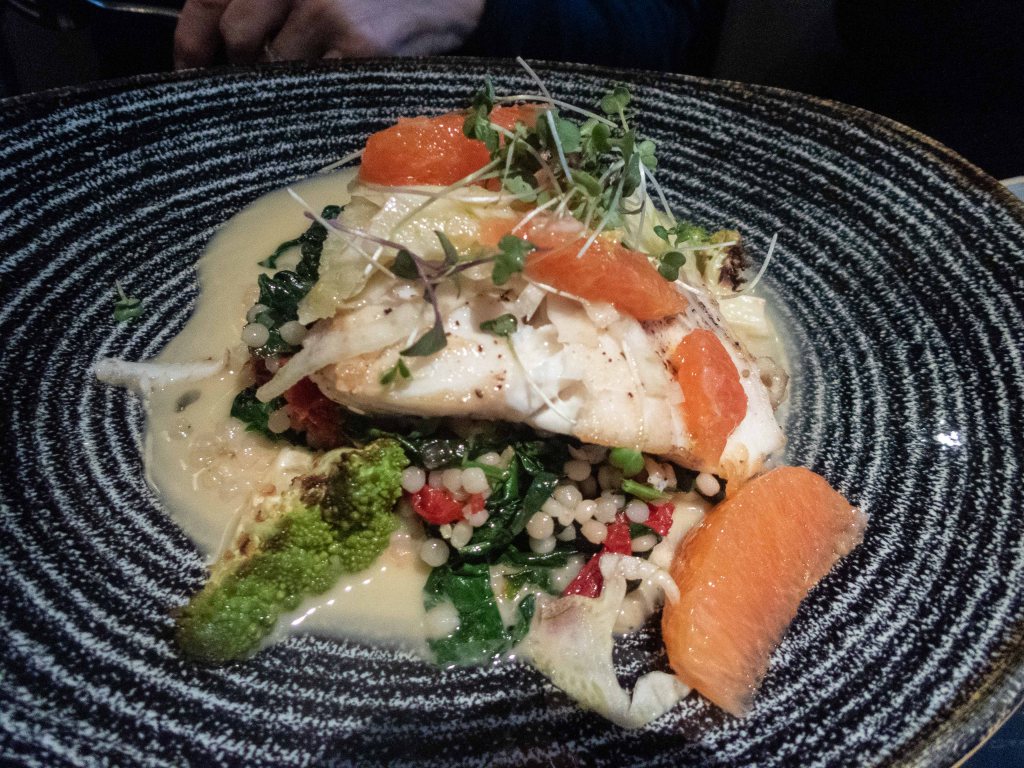 She says halibut is the hardest fish to cook correctly, and the house got this one just right.  Look at the colors of that dish–what beautiful design and plating. The flavors were as complimentary as the colors

Gayle had the phyllo wrapped chicken with Israeli couscous. 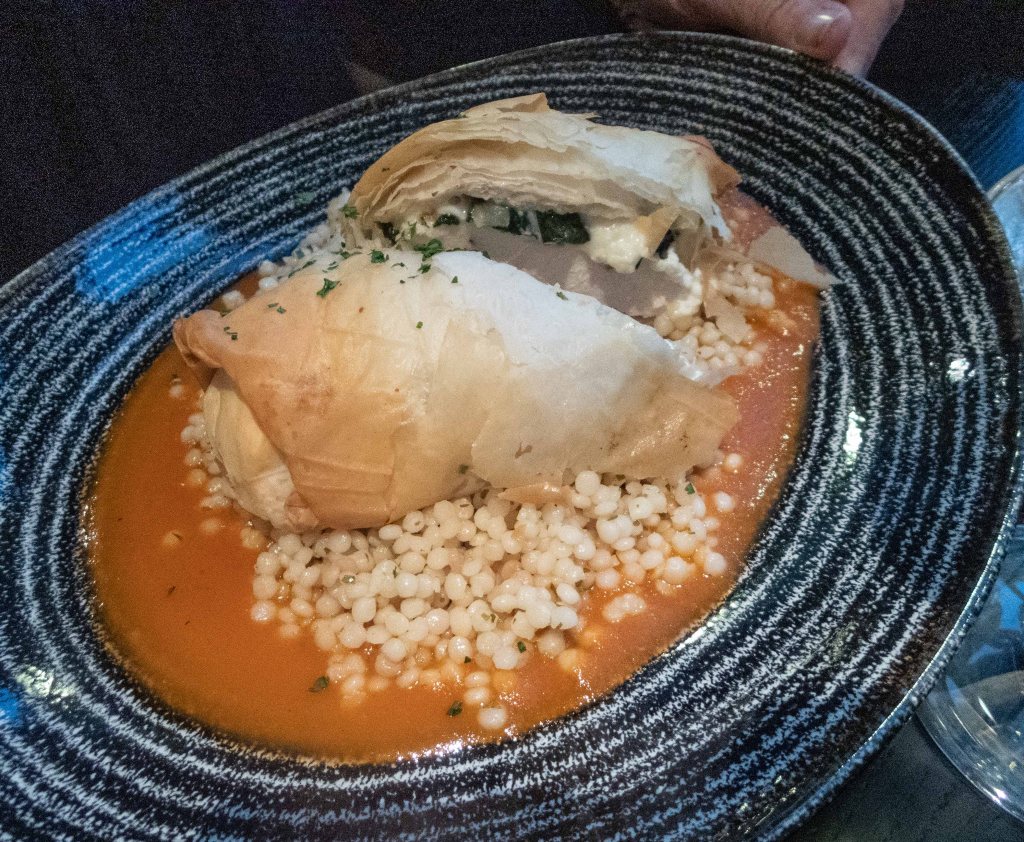 Another beauty, another delight.

Some people (Gail) have no interest in their own birthdays.  Some people (Gayle) do.  The reason we were there wasn’t kept a secret, and so with all the usual pomp and circumstance, a slice of the lemon meringue tart appeared. 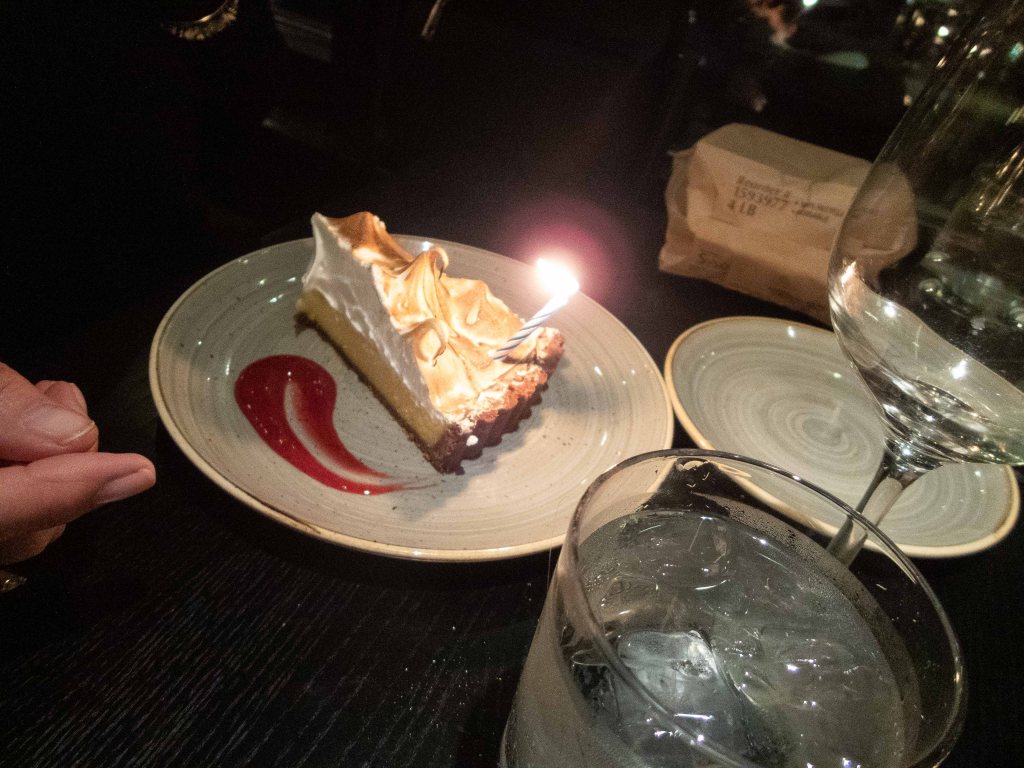 Some meringues are dry, some are thick and creamy.  I like them both. At Esin, thick and creamy is the order of the day.  The lemon filling was smoother and less tart than most, giving the dish a gentle cohesiveness.

I had to have my own dessert, of course, and chose the apple caramel bread pudding.  This is one of the best bread puddings I ‘ve had this side of the Palace Cafe in New Orleans. 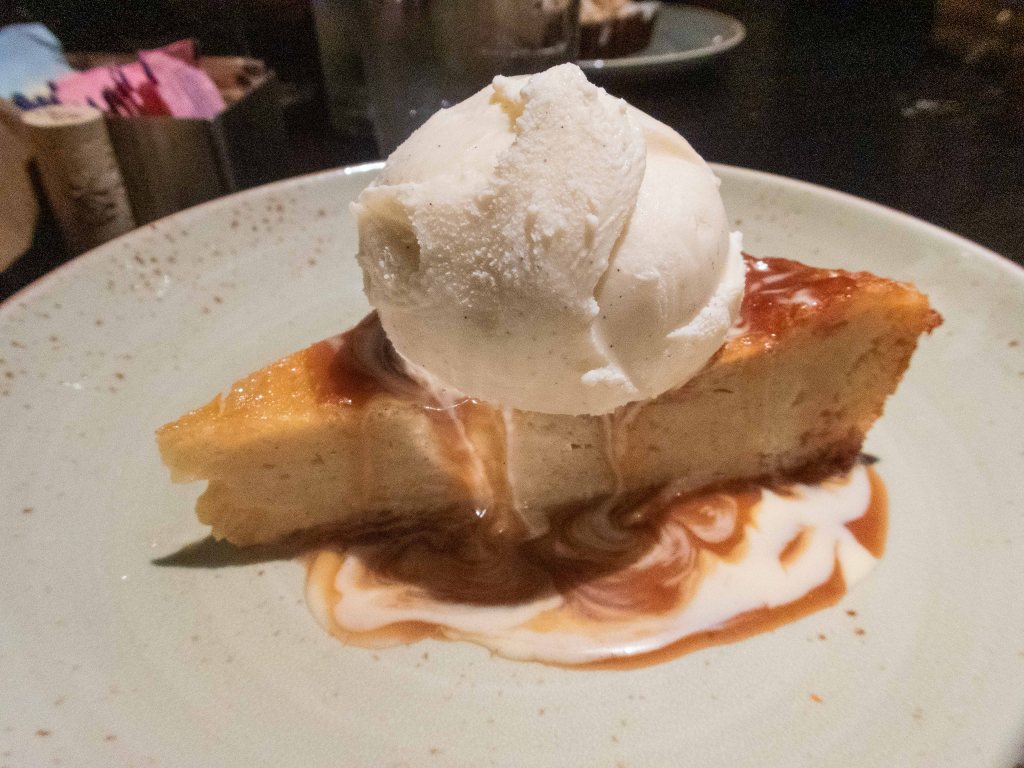 Warm bread pudding with ice cream is one of nature’s delights; I can not pass it up.

I love Esin.  Their service is great, their food is fantastic, their desserts are out of this world.  My birthday is February 13, if you’d like to make a note.

One thought on “Birthday at Esin”