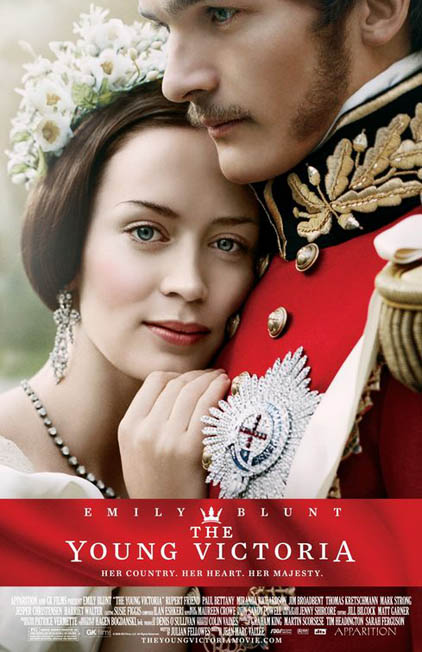 A moving story within a sumptuous film

When you think of Queen Victoria, I’ll bet you think of a prune-faced battle axe in her late 70’s, swathed in black and scowling “We are not amused” at any frivolity, humor or simple human pleasure.

The Young Victoria is the backstory to that image–the incredibly naive, utterly sheltered 18 year old girl who became Queen, and had to find her own way while buffeted from all sides by people who wanted to use her for their own purposes.

Then there was Albert.  Born into German aristocracy, and raised essentially for the purpose of wooing and winning the young Queen, he proves to have a mind of his own, and the ethical standards to abjure the weasely backroom dealings, connivings and backstabbing that surround the British Court.

Emily Blunt brings life and vivacity to the girl who would be Queen, growing in maturity and self-possession as she adopts the mantle of power.  Rupert Friend is Albert, all tongue-tied and moony over the beautiful princess then growing into full manhood.

This is an epic story, told within epic scenery.  Incredibly lush settings, brilliant costuming and an enormous cast to make up the hordes of housemen, footmen, doormen, chambermaids, waiters, servants, soldiers, guards, courtiers, ladies in waiting, assistants, adjutants, ministers, Kings, Queens, Barons, Earls, Counts and just plain people who swirl around the Queen and her court.  Director Jean-Marc Vallee doesn’t rush the story, letting it develop at its own pace yet keeping it moving nonetheless.  Cinematographer Hagen Bogdanski brings a sumptuous, rich look to the film, even if he occasionally overuses selective focus.

Interestingly, Sarah Ferguson, formerly Duchess of York and married to Prince Andrew, is one of the producers, and her daughter Princess Beatrice has an uncredited role as a lady in waiting. Of course, that kind of connection may be what it takes to arrange the locations used in this film.

Victoria and Albert seem to be a true love match, not just a political marriage of convenience.  They were together only 20 years before Albert died, at 42, of typhoid.  The ensuing 40 year reign of the widowed Victoria is what created her reputation as a disapproving martinet, but there was once a young woman full of life and joy.

At the Cinemark in Pleasant Hill.  Go see it.