The west coast should be safe this weekend: Gail and I are in Florida, visiting Susan and Karl Rowley.

They live on the 18th floor of a condo building across the street from the lake in downtown Orlando from which the firework will be launched Sunday night. We were here last year, and the view was too good not to repeat the experience. This year a party is planned, so the house will be full of people and wine. Gail, Susan, wine, fireworks, lots of people, what could happen? I hope you can wire bail money.

People have complained about airline food since the second Wright brother flight. But American gave me a “snack” today that deserves mention. 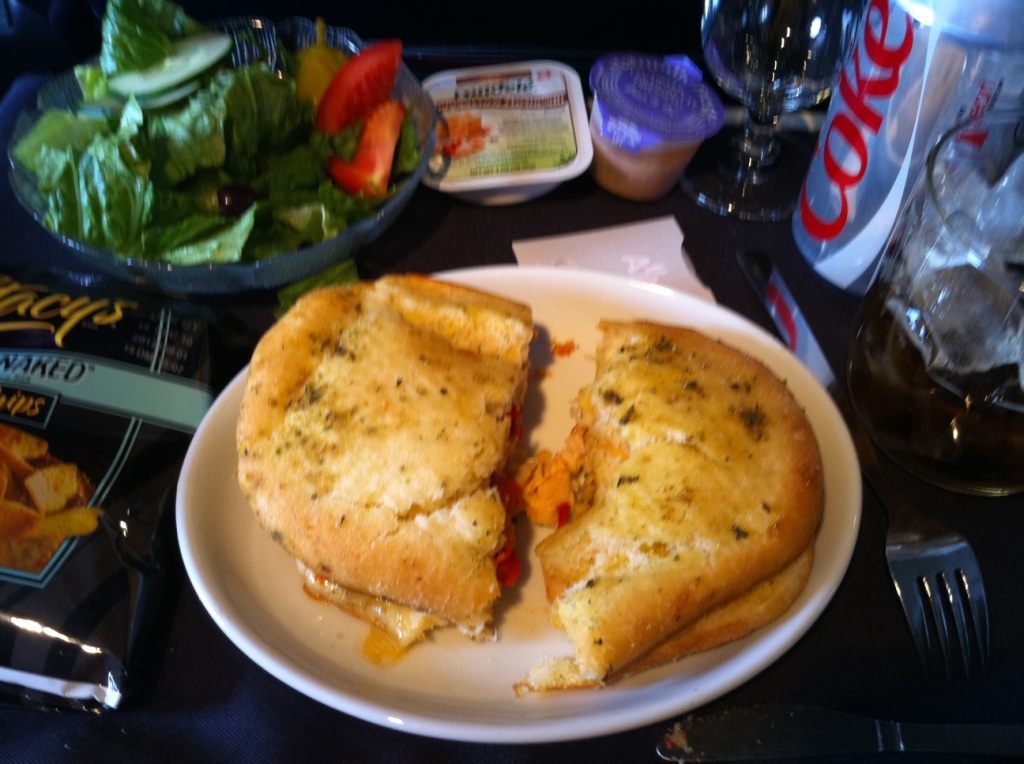 This was a huge chicken/cheese/roasted pepper sandwich on some special bread. It was fantastic, but then so was Gail’s Fajita Salad:

This was a happy circumstance: Gail and I both think we had the better meal.

And yes, I’m bragging about getting the new iPhones. I was passing the AT&T store Wednesday morning (the first day AT&T stores had the iPhone 4G), and saw the line, so I really stopped to take a photo and write about the silly people wasting their time queuing up for a phone. But the crowd was almost all company employees, waiting for customers who weren’t there. Turns out they had already sold out of their first consignment of phones, but they would give me a voucher to get later in the day. This was too good to pass up, so I took the voucher and went about my list of errands.

We had dinner in Oakland with Mike Rippey and his sweetie, Gretchen, (at Tamarindo, which I’ve written about before) and then I went back to get our new phones. Stupid bureaucracy on AT&T’s part made the process take over an hour, but we still were able to go off on our trip with brand new toys. I expect that I’ll be able to take video and post it to the blog so this may turn into a multimedia extravaganza in the near future. Stay tuned.