This could be dicey

I left Dallas and flew to Las Vegas, checking in at the Las Vegas Hotel.

FIRST:  This isn’t a complaint about the League tournament planners, especially Wendy.  Contracts are signed years in advance, and I think this hotel has plummeted very recently.  I expect that she will do everything she can to improve the situation before July.

NOW: This used to be the Las Vegas Hilton, but the clerk at the front desk told me the Hilton dumped them and ran away the moment their contract was up.  I’m starting to see why.

We’ve all been here before–I can recall at least 3 NABC’s in this same hotel.  Remember how the place used to be?  Well, not a damn thing has changed–and I don’t mean that in a good way.  The elevators were slow and insufficient 20 years ago, and they haven’t gotten any faster or more plentiful.

The first bad sign was the front desk.  Besides the fact that there was a long line to check in and too few room clerks to do the job, the staff just doesn’t look good.  Most hotels keep the front desk staff in natty suits; these people looked like they were hanging around the bus station this morning, got an LVH tee-shirt to wear and were put to work.  Not a good first impression at all.

I got a room in the center tower, which is a bad thing.  They offered me a “renovated” room for $20/night more, but we’re only here for one night and I’m cheap.  When I saw the rooms (we have 2, Kate and Brad are on this trip too), I changed my mind and asked for the better rooms but was told the hotel is sold out and there are no more rooms.  When you can’t even pay for an upgrade things they must be jammed.

Finding the elevators on the ground floor is difficult, finding the room on the 20th floor was a maze worthy of B. F. Skinner.  Then I got there, and the adventure kicked into high gear:

Your basic room. Notice the light not working over the bed on the left.

The room is plain.  The beds are old, the carpet is ancient, the furniture was on the Ark.

Sterile is supposed to refer to the sanitation, not the decor.  The dark area to the left is the toilet/bath–the light is on, it just isn’t very bright.

The bath has minimal amenities.  There is a blow dryer, iron and ironing board in the closet.

Functional but not pretty. At least there are 4 bath towels,

The TP is thin and cheap–but it isn’t any worse than I had yesterday at the Sheraton in Dallas.  The toilet/bath area is also exceptionally dark–there is one tiny, under powered light.  It looks like there used to be a retractable clothes line over the tub but it has been removed and the holes in the tile patched. 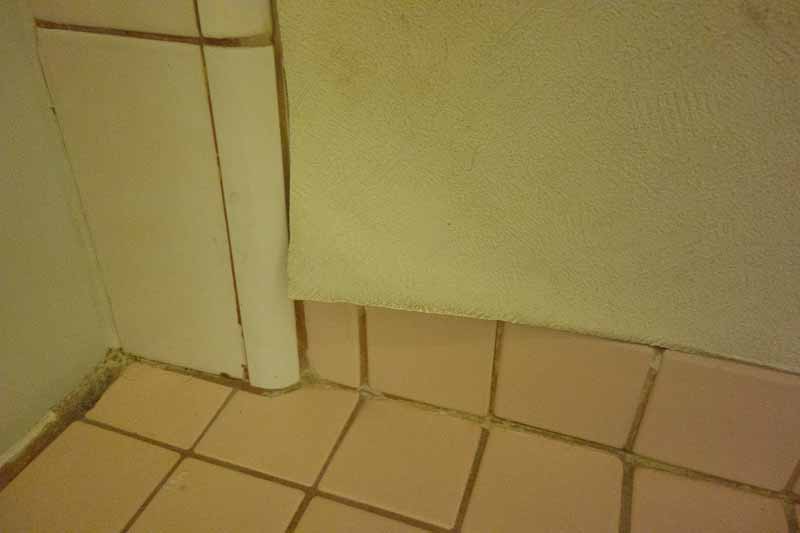 Wallpaper peeling away next to the tub.  That grout looks pretty groady, too.

The housekeeping isn’t anything to speak of–I found these behind a chair while I was scouting for an electrical outlet.

Not quite my style. Or size.

I also found a plastic stencil one might use to draw on eyebrows, carelessly dropped on the floor and not found by the maid. .  I wouldn’t have know what it was for if it didn’t say “Savvy  Beautiful Brows” on it.

A man I was speaking to in the elevator said his room hadn’t seen a maid in 2 days.

Times have changed and this hotel hasn’t.  There are nowhere near enough outlets for your computer, iPad, phone charger, etc.

Internet service is $14/day, and for only 1 connection.  The Sheraton allowed 3 connections, the Hyatt in Phoenix allowed 5.  The service is very slow. Download speed is 0.8 mps, upload is 0.3.  My phone is faster than that.

There was a woman in the gift shop searching for a toothbrush.  I said that most hotels would provide those, but she had called and was told “we don’t do that anymore”.  Neither of our rooms smell great, and one is pretty poor.  I found a maid and asked for some air freshener, but she said I had to call downstairs, they don’t give her any for her cart.

There are 3 towers here–Central, North and East.  The front desk told me that the North and East towers had been renovated, but that renovation for the Central tower was “on hold”.  I don’t like the sound of that word–it isn’t like Vegas is hurting, the joint is sold out on Wednesday night.  There are at least 3 conventions in the place today, and they are still pinching pennies.  I was not able to see a renovated room, but I don’t think they are remodeled, just some new curtains and beds.

[I just looked up to see what was blowing in the air conditioned breeze and it’s the tatters of the curtains.  The sheers have been removed completely but the tracks are still there on the ceiling.]

These belong in the Bates Motel, not a supposedly 4 star resort hotel

Just looked at the coffee maker–the cups with the coffee pods are sealed.  It costs you $3.50 for every cup you open.  That’s dreadful, and I don’t even drink cofffee.

For this price I want a barista to come to my room and brew it.

Spending 11 days here in July might be an adventure.  I suppose they will charge more for the renovated rooms, but it will probably be worth it.  On the other hand, I doubt that they are significantly remodeling, so bring an extension cord and power strip.  Consider getting a mobile internet device–it will be cheaper and faster than the pig slow service they offer here.  Don’t lose your toothbrush.  Bring your own air freshener and coffee maker.  If you really want a first class hotel, this isn’t it.  The MGM Grand is at the other end of the light rail, the Venetian is in between.  I’d consider them.

7 thoughts on “This could be dicey”