Mother’s Day, and the dining is difficult.  Restaurants are jammed to the walls with people who only go out to eat once a year and don’t know how to do it.  Reservations are hard to get, service is overburdened and the experience is often dreary and miserable.

Dinner started well when there was a valet available to park the car–Larkspur is small and parking is otherwise difficult.

Picco is two restaurants in one–a pizza parlor on one side, a fine dining establishment on the other. Both were jammed on the busiest day of the year.  The 5 of us were crammed into a table for 4, with poor Brad sitting in the aisle where the waitstaff was constantly rushing.

That’s the bad news.  The food is the good news. We started with a couple of appetizers. 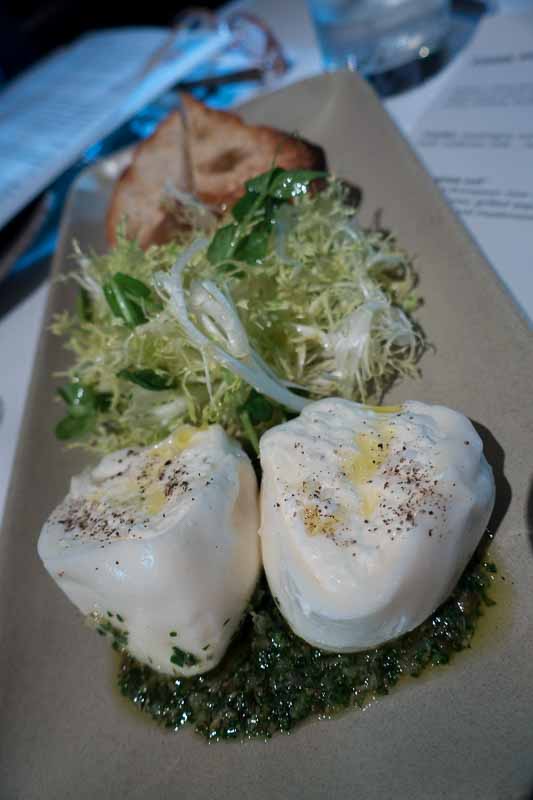 If there is burrata, Kate and I will be fighting over it.  Picco got extra points here because the toast was warm and soft, not the hard, brittle, tasteless roofing shingles I so often get.

Gail could have had two orders of this and been happy for the night.  More of that perfect toast, avocado sliced paper thin and topped with balsamic vinegar, with julienned strips of chorizo to add piquancy.  It was fabulous, inventive and new.

There was one flaw: 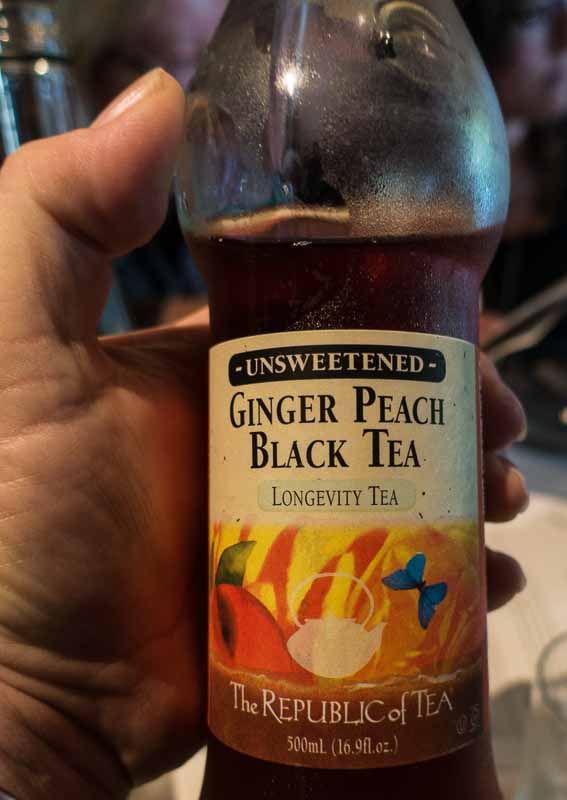 This is not tea

I’m a simple man, with simple tastes.  When I order iced tea, I want them to dunk a bag of Lipton into some hot water, cool it off and bring it to me.  I don’t want ginger peach, I don’t want mango hibiscus, I want iced tea.  This isn’t it.

Restaurants do this in a failed attempt to “add value” to every item.  And to charge more–you can get $7 for a bottle of this junk, and you don’t have to refill it.  They wouldn’t dream of serving some hoity-toity bottle of chi-chi fruity bug juice instead of coffee, why do they plague me with this miserable crap?

Back to the goodness.  This is a kale salad: 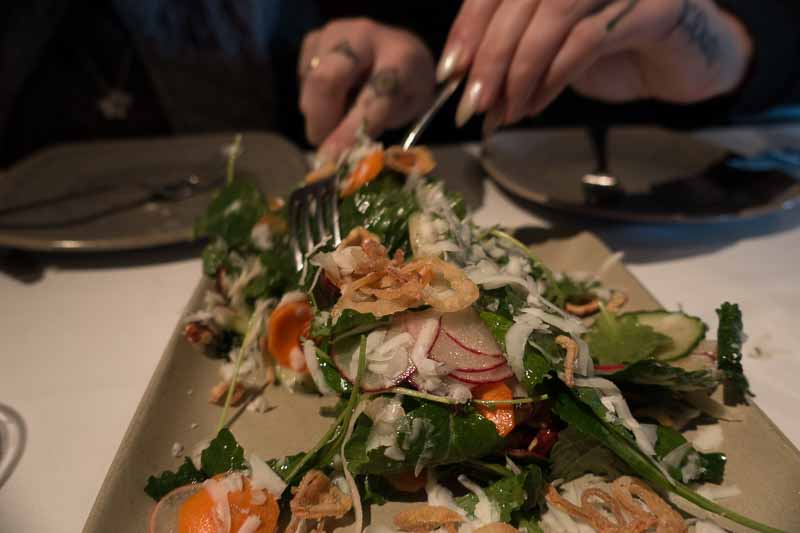 Kale is this year’s ‘in’ veggie.  All the cool people are eating it. Picco makes a salad with kale, carrots, cucumber, radish, hazelnuts, crispy shallots and black truffle pecorino.  Even macho men like it.

Now comes the highlight.  I like gnocchi, those little pillows of potato that are sort of like pasta and sort of not, but I’ve simply never had anything as wonderful as these: 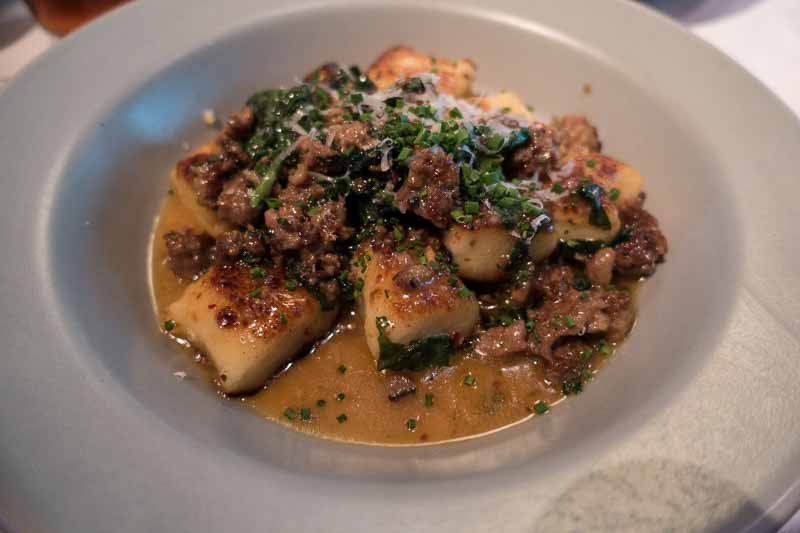 The best gnocchi ever

Ordinarily, gnocchi are boiled, sauced and served.  Picco totally changes the game by taking the boiled gnocchi and grilling them, then serving them with house made fennel sausage and black truffle butter.  If you aren’t careful, they will stick some wild mushrooms on the plate, but of course I would never allow that sort of desecration of good food.

Grilling gives the gnocchi both flavor and texture missing from more common presentations, items that lift this dish to heavenly virtue.  The sausage is incomparably good. Brad and I both ordered this, and we both simply raved about how good it is.

So good, in fact, that I told the waiter I wanted to compliment the chef.  Two minutes later, we had a visitor: 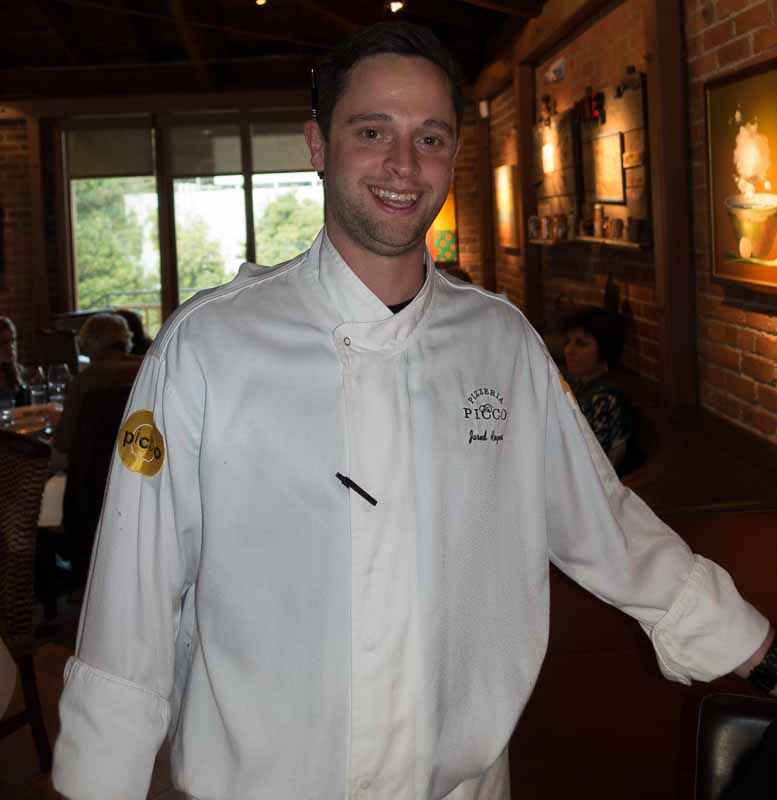 Chef Rogers apprenticed in his first kitchen at 15, graduated from the California Culinary Academy, and at 30 is a local star and the genius behind the first rate food at Picco.

Gail had the radiatore, Kate had the bucatini, Demitra Athena Marie enjoyed the salmon.  We had dessert.  We loved every single thing on the table, and cleaned our plates.  But the gnocchi were the stars.

Service was excellent, even considering the dreadful day we had chosen to dine out. Picco is the only restaurant any of us had ever seen that offers a choice of ice–you can have one huge rock, regular cubes or crushed. Just another way to differentiate themselves from the crowd. The prices were what you would expect for a first rate white-tablecloth joint in Marin–not cheap, but not ghastly.

We have a couple of trips coming up, and Brad is already planning when we will all be back in town so we can go to Picco again and order more avocado bruschetta and gnocchi.  It just won’t be Mother’s Day, and maybe they can do something about a decent glass of iced tea.