Friday we started the North American Swiss Teams, and ended it, too.  We just needed to win the last match of the day to qualify, but that didn’t happen.  We weren’t thrilled with the idea of hanging around watching other people win, so we agreed to play a compact KO on Saturday, change our flights and go home a day early.  Save a few bucks and make Gail and Linda happy (one hopes).

Because it seems wrong to spend a week in a hotel in a strange city without seeing anything new, Saturday morning I took an Uber to the center of the Denver Arts district, just to walk around.

I started at the Denver Photo Art Gallery, which displays a wide selection of outdoor animal and landscape photographers.  The modern trend is to very large prints, from 4 to 7 feet wide, single photos which will dominate a wall or a room.  This gallery had plenty of them, some very beautiful, some overworked, oversaturated, overbright and just plain garish.

About half of the gallery is dedicated to a local artist, John Fielder.  A spectacularly talented photographer, he has phenomenal photos of his native Colorado and brilliant work from Africa.

Across the street, I walked into a small crafts gallery and learned something. Apparently, there are many trees killed by beetles, and it is considered ecologically sound to only use the wood from those infested trees, not felling healthy trees for artistic purposes.  The wood of these trees has a strong blue tint, which is considered desirable in the furniture created therefrom. 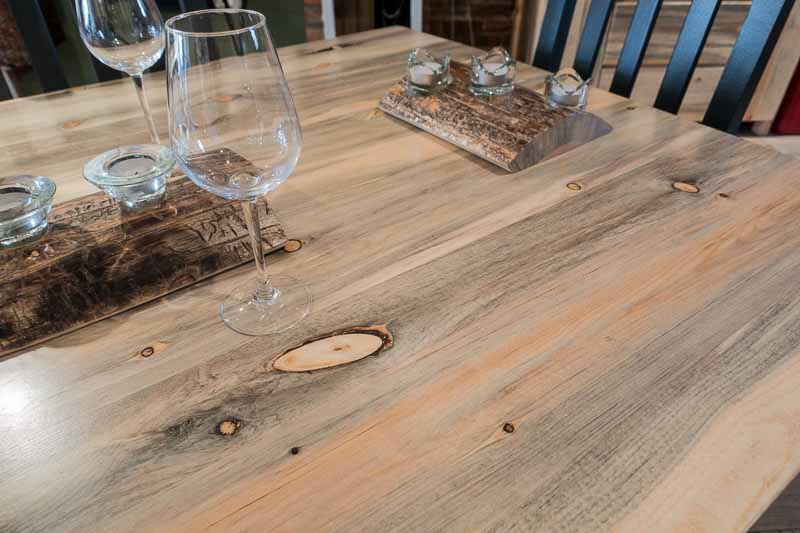 A table showing the characteristic blue color of beetle-kill wood.

It was cold and I was hungry, so I stopped into an old fashioned breakfast place. 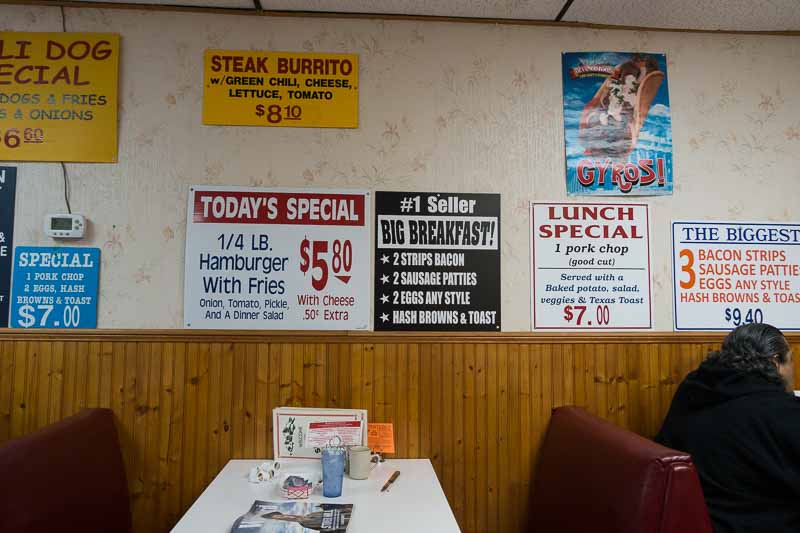 How can it be the “special” if you have a printed sign?

The food was classic–copious portions of American standards.  I didn’t even need to open the menu, this was on the cover: 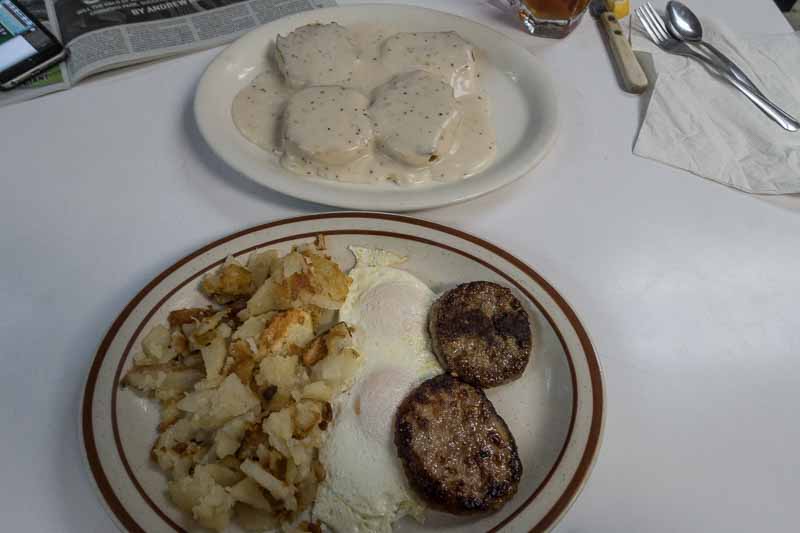 Eggs, spuds, sausage and a plate of biscuits and gravy. They think this is normal.

Yes, that is more food than anyone needs.  Yes, it was delicious.

In the age of computer ordering systems in every restaurant, it was fun to get an old fashioned check.  Especially one so reasonable. 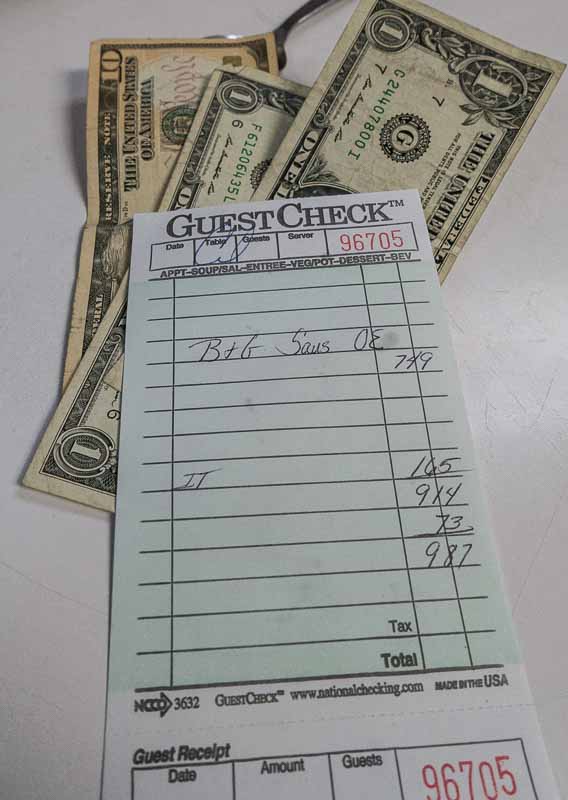 Not many galleries were open, so I just kept walking in the direction of downtown–it was only a mile or so to the hotel and I was in no hurry, which gave me a chance to enjoy the scenery and notice the many murals (and one interesting door) decorating the area. 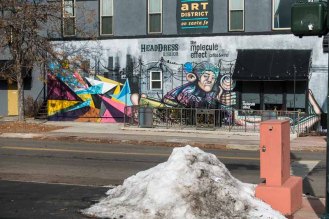 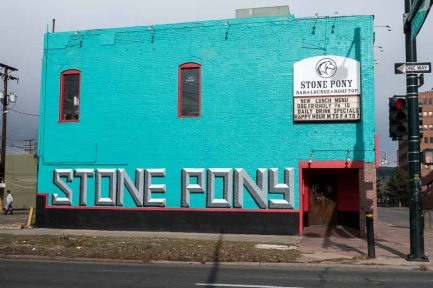 Friday night we ate a an Irish restaurant on the first floor of the hotel tower I was ensconced in.  The food was mediocre, but it was fun noticing Mike was having some kind of sissy martini: 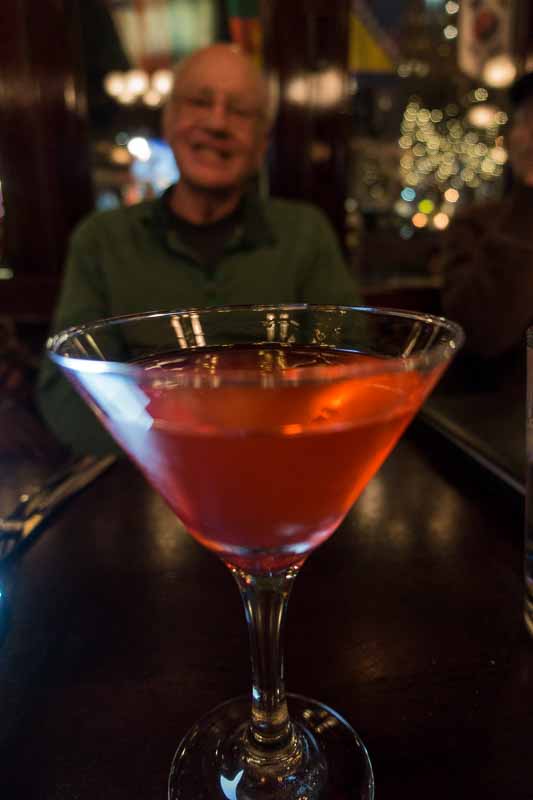 Is this the drink of a manly man?

We almost won the Saturday KO–on the last board of the last round, our teammates bid a slam that should make 80% of the time, and we would win the match.  This was the day for the other 20%, and we were second.  C’est la vie.

The cab from the airport to the hotel was $57 plus tip.  The return trip via Uber, the fare was $39.47, no tipping allowed.  That’s why Uber will rule the transportation world soon.

Denver was great.  I liked the playing site, had some decent food, saw my friends and enjoyed the Arts District.  Prices are much lower than California, the downtown mall is an excellent design and I won a couple of points.  Life is good.

One thought on “Done with Denver doings”