Not the best catch

A couple of months ago Gail and I wandered into Pacific Catch, a new restaurant in Walnut Creek, for lunch.  We liked it, so I wanted to go back for dinner.  Tonight, we tried it out with Mike and Linda,

The food was just as good as I remembered.  The service was execrable. Ghastly.  Random, bizarre, and incomprehensible.  We were not impressed.

Pacific Catch is part of a growing West Coast chain of reasonably priced, family-friendly, hip and happening fish emporiums.  The facility is bright and airy, open and modern, loud as a roaring freight train.  We had planned to sit outside, but they don’t seem to have very effective heaters so we moved indoors–by pleasant coincidence the granddaughter was home babysitting Claudia.

Drinks were ordered.  In a few minutes, Gail got her wine.

10 minutes later, Linda got her wine and Mike got the sissy cocktail of the day. 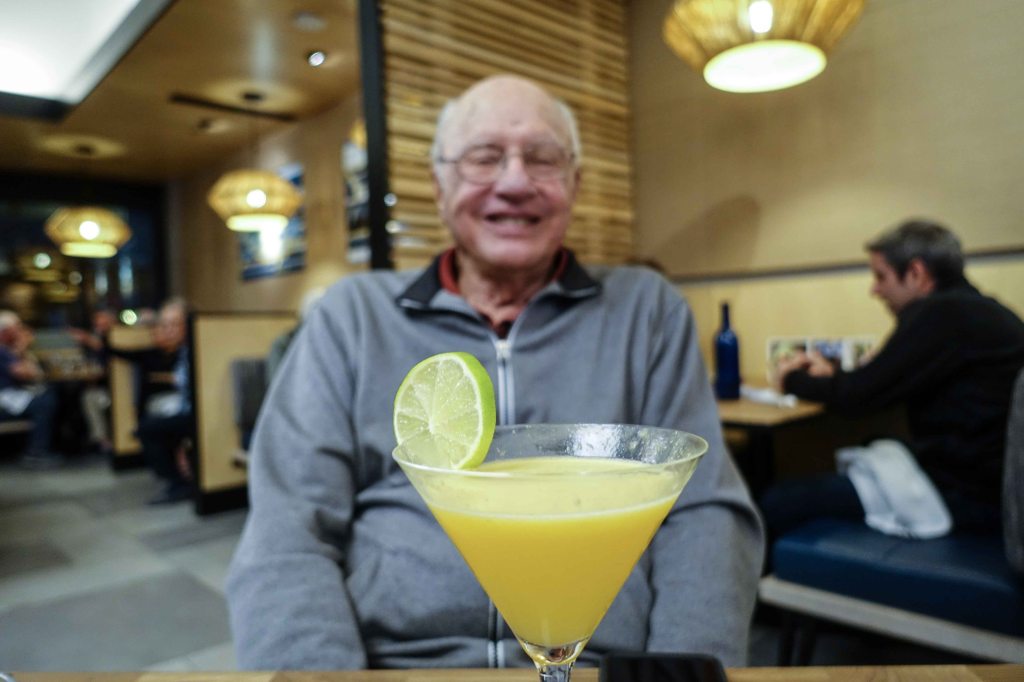 If this just had a little umbrella it would be perfect.

The ‘iced tea’ at Pacific Catch is one of those tropical fruit/mango/peach/hibiscus/broccoli concoctions that restaurants for some reason inflict on innocent tea drinkers.  Fortunately, I’ve learned to ask first, and then order a hot tea and two glasses of ice.

So we ordered.  This restaurant has an interesting menu with ceviches, pokes, sashimi, tacos, fish and chips, grilled fish, and the odd hamburger for the unenlightened.

I started with the original Ahi poke, small cubes of raw Ahi tuna in a mildly spicy sauce, served in something like a martini glass with fried wontons to scoop it up.

All well and good, but I was the only person at the table with food.  For the next 15 minutes.  The situation was utterly absurd.

Eventually, we got hold of the manager, who said they were swamped because 3 staff members had called in sick.  That might explain the slow service but not why they had brought just the one dish–they should have waited until all the dishes could be brought at once.

This silliness is further compounded by the fact that Linda was having the salmon poke,  Gail the soup and Mike the ceviche–all dishes that are prepared in large quantity in the afternoon, and need only to be portioned and plated, just like my dish.  Why they did not come out all at once is just a mystery.

The good news is that we all thought our food was extremely good.  We didn’t like to admit it, given how cranky we were with the place, but there was no denying that my poke was simply succulent, with just the right amount of spice.  Gail, a picky soup lover, was quite pleased with her salmon chowder. Linda loved her salmon poke and Mike left no crumbs of his fish.

Mike’s fish platter, with a side of elote, Mexican corn.

I then had the two taco platter, with a salmon and a rockfish taco.

I thought the tacos were excellent, the fries crispy and the black beans just right.

I also ordered a side of the Thai brussels sprouts, both because I like them and because Mike hates them–memories of his frat house.  A very interesting treatment of the little green things, they were quite sweet with none of the bitterness often associated to them.  Linda took the leftovers home because she never gets them.

As we were all finishing, they dropped off Linda’s beet salad.  Another item it doesn’t take long to prepare.  It was a very good salad, with interesting pink beets, perhaps a cross between the usual red beets and they yellow ones.  If only it had come before her main dish…..

The waitress came to clear some plates, and I called for the check.  We made sure to have our credit cards ready when she returned to prevent her from dropping the tab off and then disappearing, and we were out of there.  Yes, we left a tip, but it wasn’t large.

I have to say that I’m crushed.  This place has so much potential and so little delivery.  They have a great menu if they could just get it to the table in some kind of reasonable order and time frame. The prices are reasonable, the room is clean and inviting, but I don’t think I’ll ever manage to get Gail to go back.

One thought on “Not the best catch”